It took about a year before the eventual passage through the legislative mill of the Expanded Solo Parents Welfare Act, from House approval in January 2021 to the passage by the Senate of the same bill last Dec. 13. The date also marked the 21st anniversary of the passage of the original bill in 2000.

Now all that’s needed for the bills to become law is a bicameral conference committee to come out with the final version, and then the signing into law by President Duterte.

Some 15 million solo parents, 95 percent of whom are women, stand to benefit from the added benefits provided by this piece of legislation. “It is a victory for solo parents who are striving to improve the welfare of their children,” said Sen. Risa Hontiveros, who is a solo parent herself having been widowed when her youngest was only three years old, and chair of the Senate committee on women, children, and family relations and gender equality.

As its name suggests, the Act expands the definition of a “solo parent” to include grandparents and other family members and even nonrelatives who are helping raise children who have lost one or both natural parents; and also the spouses or partners of overseas Filipino workers engaged in marginal labor and living abroad for long stretches of time.

The Senate version of the bill also provides an expanded list of services and assistance to solo parents. These include a monthly subsidy of P1,000 per indigent solo parent, automatic PhilHealth coverage, and apprenticeship programs at the Technical Education Skills Development Authority for qualified single parents and their children.

Also, part of the proposed measure is a “comprehensive package” of social protection for solo parents and their children, including livelihood opportunities, legal advice and assistance, counseling services, parent effectiveness services, and stress debriefing, regardless of financial status. 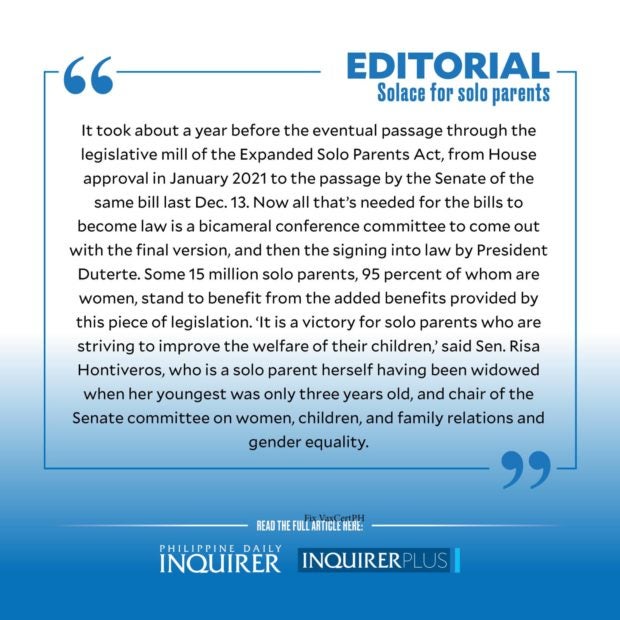 Under the proposed law, solo parents will also be given preference in government housing projects. It also grants an additional seven-day paid parental leave to the present leave privileges of working solo parents, and gives priority in telecommuting arrangements with their employers.

To protect government from those seeking to circumvent the law, the bill, per a Senate write-up, requires the submission of a sworn affidavit declaring that the solo parent is not cohabiting with a partner or co-parent, and has custody and bears sole parental responsibility over the child or children. An identification card shall also be issued to solo parents.

Stressing the urgency of the bill’s passage into law, Hontiveros said the daunting challenges that solo parents and their families face have been aggravated by the effects of the COVID-19 pandemic.

Aside from needing more than ever to find gainful employment and livelihood, “solo parents also serve as teachers to our children,” the senator said. “When they get sick, whether (from) COVID or not, the little savings we have get wiped out and we have no one to share this burden with.” This is why the passage of the Expanded Solo Parents Welfare Act “shows that solo parents have allies in the government. Those who are willing to lift the burden they are carrying on their own.”

Once signed into law, the measure could also address a serious and growing social problem—the abuse and exploitation of women and their children—made possible by the fear fostered by abusers of the loss of income and consequent hunger and helplessness, as well as of social ostracism, if the abused partner decides to end the relationship.

While the benefits to be granted under the Expanded Solo Parents Welfare Act are certainly not sufficient to allow for a comfortable existence, the assistance would certainly ease the burden carried by abused wives or partners, removing the edge of anxiety and doubt that keeps them under the thumb of an abusive partner, giving them the courage to leave.

As Hontiveros said, the law is proof that government cares for the well-being of an oft-silenced and overlooked sector of society, who too often suffer in ignominy and often believe, wrongly, that their suffering is their own fault. It also reaches out to help children who, after losing one parent, need not be consigned to a life of struggle and strife.

Now all that’s needed is for the measure to be signed into law, and then implemented vigorously and generously by all concerned government agencies.