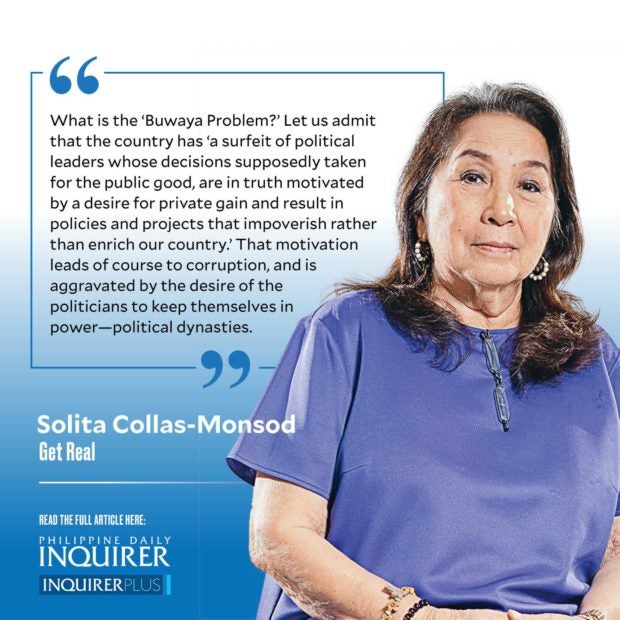 At my last session with an Econ 11 (Principles) class of 280 students, I gave them a powerpoint presentation, “The Philippine Economy—a Long (and Wide) View,” which starts with a slide showing the economic growth of the Philippines from post-World War II to the present, by administration, from Roxas to Aquino to the Duterte years.

The points those slides highlight is that the 20-year Marcos administration had an average growth rate of 3.8 percent, mainly because Marcos presided over the collapse of the Philippine economy starting in late 1983, a collapse which took the Philippines until 2003 to regain the per capita income it had before that event.

The presentation compares the Philippines’ and other countries’ performance from 1960-2009—a period of 50 years—using a table taken from Perkins et al., “Economics of Development.” That table shows that the Philippines was considered a “slow growth” country (countries were classified according to whether they had “negative growth,” “slow growth,” “moderate growth,” and “rapid growth”). Our GDP per capita growth rate over those 50 years averaged 1.58 percent, less than half of Thailand’s 4.36 percent, Malaysia’s 4.25 percent, and Indonesia’s 3.69 percent (China’s average was 6.18 percent).

The obvious question was why we grew so slowly. Studies by Jeffrey Sachs and the ADB showed the major factor influencing differences in growth rates between countries (with the Philippine vs. the four Tigers and us vs. SEA/China as examples), was government policies and institutions (accounting for between 70 and 80 percent) of the differences, with the other 20-30 percent being attributable to initial conditions, natural resources and geography, and demography.

So there you have the answer: Government policies—not the form of government—which are crafted by our government leaders (politicians), and institutions. I call this the “Buwaya Problem.”

What is the Buwaya Problem? Let us admit that the country has “a surfeit of political leaders whose decisions supposedly taken for the public good, are in truth motivated by a desire for private gain and result in policies and projects that impoverish rather than enrich our country.”

That motivation leads of course to corruption, and is aggravated by the desire of the politicians to keep themselves in power—political dynasties.

Last week, this column talked about how corruption seems to have deteriorated from the last to the present administration. But corruption has been a bane, recognized by Nobel Laureate Gunnar Myrdal in his book “Asian Drama,” published in 1968, when he said that “graft and corruption permeate all levels of public life” in this country.

Let us (as my presentation does) fast forward to 35 years later when the World Economic Forum (WEF) in 2003 came out with its Executive Opinion Survey, which essentially compared the extent of political corruption across the world. Among the countries surveyed, the Philippines was the only country in Asia which had “high political corruption,” along with Madagascar (which was a “negative growth” country in the Perkins table, and Argentina, a “slow growth”). Thailand and Indonesia were in the “medium category.” This strongly suggests that corruption impedes growth. Worse, studies show that corruption retards the emergence of strong institutions over time—which makes for slower growth and development. Worst of all, the ones who suffer most are the poor.

Transparency International’s Corruption Perception Index (CPI) takes up where the WEF leaves off. And the CPI shows that Thailand, Indonesia, Malaysia, even Vietnam for heaven’s sake, SCORE higher than the Philippines (where higher is better), as well as RANK lower (where lower is better). We are 115th out of 180 countries, while they are in the low 100’s. Malaysia ranks 42.

What does this tell us? 1. We have to pass an effective anti-dynasty law, which has been 35 years in the making, and the first step to doing that is voting the dynasts out of Congress, which we seem to have started in 2019 when the Estradas and the Binays and other dynasties took a beating. But alas, they are coming out again. 2. We have to elect a president who does not represent a dynasty—that leaves one candidate out. How to shorten the list some more? 3. We have to elect a president who has worked with the poor, and walks the talk. The rest just talk. That leaves just one.