Copy, paste, and save FYI 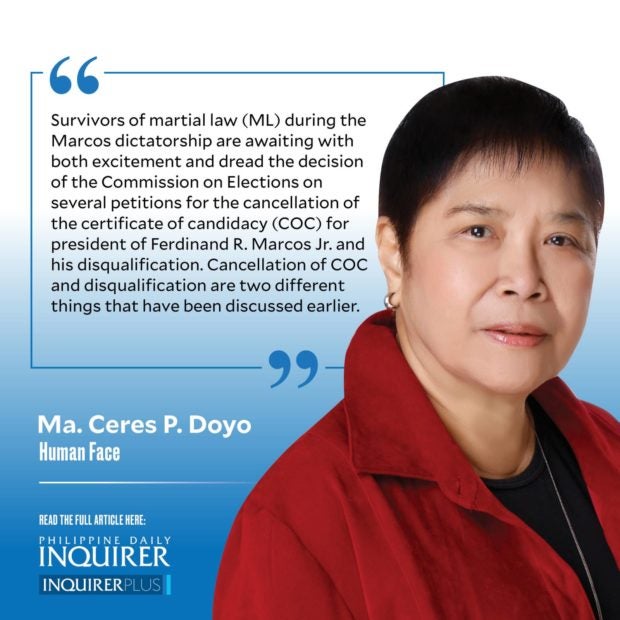 Survivors of martial law (ML) during the Marcos dictatorship are awaiting with both excitement and dread the decision of the Commission on Elections on several petitions for the cancellation of the certificate of candidacy (COC) for president of Ferdinand R. Marcos Jr. (Bongbong) and his disqualification. Cancellation of COC and disqualification are two different things that have been discussed earlier.

Separately, a group of ML survivors, with the help of their lawyer, are also discussing points that are relevant to the petitions against Marcos Jr.’s candidacy. Not many are conversant about the legal aftermath of the ouster of the dictator and the labyrinthine legal path the survivors pursued that ended in triumphs in court. That is not to say that justice has been fully served.

Here, for those survivors whose memory might have been blurred by time, for those interested in history and the legal weapons used to achieve justice and make the guilty answerable for their sins, know that battles had been won and the legal triumphs are writ in stone and the world’s legal annals.

Historical and legal points relative to the petitions (copy, paste, and save):

1. The class suit (Hilao v. Ferdinand E. Marcos) was filed in April 1986 in Federal Court in the United States alleging that Marcos directed and orchestrated the torture, summary execution, and disappearance of about 10,000 Filipinos between September 1972 and February 1986.

2. Marcos died in September 1989. Imelda Marcos and Ferdinand R. Marcos Jr. were substituted as personal representatives of the Marcos estate, in effect making them parties to the lawsuit.

3. The class was certified by the US Court, and 9,539 Filipinos qualified as class members.

5. While the case was pending pretrial, the class in November 1991 obtained a preliminary injunction prohibiting the estate and its representatives from transferring, concealing, conveying, or dissipating the assets of the estate.

6. The final judgment made the preliminary injunction permanent.

7. In January 1995, the class filed a motion to hold the estate and its representatives in contempt for violating the injunction.

8. The motion was based on revelations that the Marcoses and the Philippine government had entered into agreements in 1992 and 1993 dividing the estate’s assets between them.

9. Imelda and Ferdinand R. Marcos Jr. refused the class’ requests for their depositions and for production of documents regarding the agreements with the Republic.

10. After four court hearings, the Court found the Marcoses in contempt of Court and issued a coercive fine, payable to the class, of $100,000/day until they purged their contempt.

11. The Marcoses refused to purge their contempt, and, in fact, continued to violate the injunction.

12. Among other violations, the Marcoses in 1997-1998 actively tried to obtain for themselves the funds at Merrill Lynch in the name of Arelma, a Panamanian corporation. Through Jose Campos, dictator Ferdinand E. Marcos created Arelma and deposited $2 million into its Merrill Lynch account in New York in 1972. By 2000, the funds totaled more than $35 million.

13. In January 2011, the US Court entered final judgment for the class on the contempt motion in the amount of $353,600,000 against the estate, Imelda Marcos, and Ferdinand R. Marcos Jr. The final judgment was affirmed on appeal.

14. The judgment proved useful in the artwork litigation in New York involving paintings purchased by Imelda Marcos which were held or sold by Vilma Bautista, Imelda’s personal secretary in New York. The class executed on the paintings and proceeds from their sale, and recovered $23.75 million. But for the contempt judgment, this would not have been possible.

16. The contempt proceedings in the US demonstrate the unlawful conduct of Marcos Jr. and his disdain for courts and the law. They mirror his unlawful conduct resulting in his conviction for tax fraud in the Philippines.