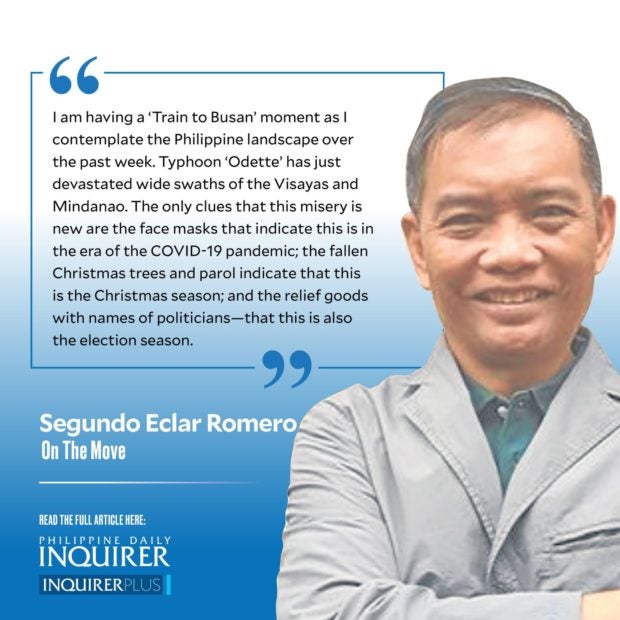 I am having a “Train to Busan” moment as I contemplate the Philippine landscape over the past week. Supertyphoon “Odette” has just devastated wide swaths of the Visayas and Mindanao. The only clues that this misery is new are the face masks that indicate this is in the era of the COVID-19 pandemic; the fallen Christmas trees and parol indicate that this is the Christmas season; and the relief goods with names of politicians—that this is also the election season.

But Odette is the usual type of disaster that Filipinos are familiar with, and despite the optics of desperation, one can foresee that this time next year, most of the houses have been rebuilt, and life goes on, ready for the next onslaught.

What tells me there is a zombie-causing virus in the air is the Pulse Asia Survey December report on voter preferences that shows Ferdinand Marcos Jr. has 53 percent, more than the 42 percent combined vote preference for Leni Robredo at 20 percent, Isko Moreno at 8 percent, Manny Pacquiao at 8 percent, and Ping Lacson at 6 percent. This 53 percent is up by 40 percent from the June (13 percent) and February-March (13 percent) vote preference for Marcos Jr. I find this vote bubble to be unprecedented, and nothing about charisma, track record, normal organizational campaign machinery, and normal levels of guns, goons, gold, gimmicks, and glitter sufficiently explains it. There is something else in the air, a mental virus.

I first got a glimpse of this virus in September 2017 when the Philippine media widely reported a curious mass event. Thousands of people from all over the Calabarzon region and as far away as Marinduque converged at the University of the Philippines Los Baños (UPLB) to receive what was promised them as members of the One Social Family Credit Cooperative—P1 million or gold bars each from the famed Marcos wealth.

It was virtually a zombie swarming. Traffic in Los Baños town was paralyzed, and the UPLB community was shocked. The people came on rented jeepneys and vans. They clasped a plastic-covered membership booklet on the so-called achievements of former president Ferdinand Marcos that had a picture of Marcos on the front cover and the text “Bullion Buyer Ltd.” at the back. A booklet cost P30 each. The co-op’s chair, Emmanuel Destura Jr., said the late President Marcos had wanted to give away his treasure, which had been boosted by the Solomon and Yamashita treasures, to Filipinos.

Ferdinand Marcos Jr. called the whole affair “a scam, pure and simple.” He disavowed any connection with the general assembly called by the One Social Family Credit Cooperative. He did suggest that “the Aquinos” may have had something to do with the event. For his part, Destura admitted the group was in no way connected to Ferdinand Marcos Jr. or President Duterte.

The people who went home empty-handed had the nonchalance of losing lotto bettors. A tricycle driver joined the cooperative to get money. If it’s a scam, he said, he didn’t have much to lose. Another attendee was undeterred. “At least we got to travel to UPLB,” she said. “It’s my first time here.”

It seems many Filipinos are capable of mutually- or self-induced virulent hallucinations about the Marcos wealth. The story gets enriched by the day, and the Tallano gold is the latest spice of the season. This is seemingly an unstoppable train barreling toward the May 2022 elections.

As in the “Train to Busan,” various heroes are trying to stop the zombie music, emanating from Facebook and other social media platforms, that causes the madness. They include the newly formed Movement Against Disinformation (MAD) headed by Antonio La Viña, Ateneo professor and environmental and human rights activist, and Rico Domingo, president of the Philippine Bar Association. The group thinks that certain disinformation campaigns, like promising the distribution of treasure troves to the electorate, could undermine an election outcome.

Indeed. As the zombie swarming in Los Baños showed, disinformation moves real people. With four months to go, there is time for this country to catch itself from its folly and save itself before it reaches our Busan, the May 2022 elections. But we need more than heroes. Just like the COVID-19 virus, this requires face masks (filter disinformation), social distancing (stay away from polluted websites), and hand-washing (openly call out falsehoods) by everyone.