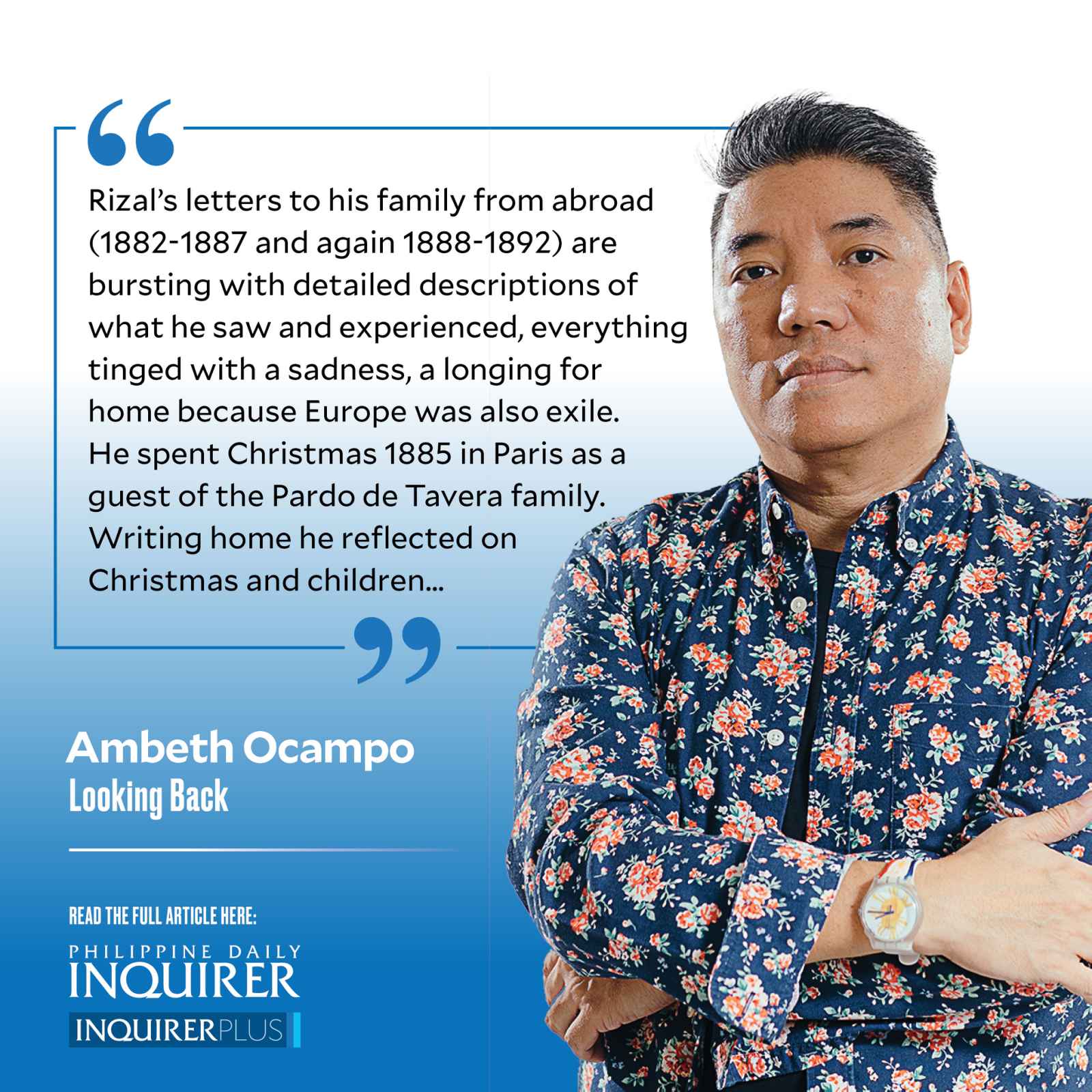 Don’t think of giving an exchange gift to Filipinos,” Jose Rizal warned his friend Ferdinand Blumentritt in May 1890, “or we would spend all of our life exchanging gifts.” Rizal’s words ring true as usual, reminding us of “utang na loob” or debts that can never be repaid in our lifetime. With three days into Christmas, I have yet to draw up a gift list beginning with thoughtful people whose gifts have already been consumed or lie un-opened in a Christmas pile. No Christmas tree this year. No decorations except a wreath on a door that hides the pandemic lack of cheer inside. A small table-top evergreen tree arrived weeks ago filling our home with scent that conjures memories of Christmas carols and chestnuts roasting on an open fire.

Material for a column on Rizal’s Christmas was scarce, hiding in his five-volume correspondence; he was too busy to write during Christmas. His worst was Christmas 1896, locked up in Fort Santiago waiting for the death sentence handed down on Dec. 26. That he would not live to see New Year 1897 must have reminded him of prophetic words in the “Noli me tangere,” when the dying Elias told Basilio: “I die without seeing the dawn break over my motherland; you who will see it; greet it; and do not forget those who fell in the night.” Rizal’s last days were spent scribbling: farewell letters to family and friends, the “Último Adiós.” Much more was found disintegrated in his coat pockets and shoes, when his remains were dug up.

He started his letter to Blumentritt: “When you receive this letter, I shall be dead. Tomorrow at seven, I shall be shot; but I am innocent of the crime of rebellion…” To his mother, a souvenir: “A mi muy amada madre Sra. Dna Teodora Alonso a las 6 de la mañana del 30 de Diciembre 1896. Jose Rizal” (To my very beloved mother, Teodora Alonso, at 6 a.m. of Dec. 30, 1896.) A note, dashed off an hour and five minutes before he was shot, that speaks volumes.

His last happy Christmas was in 1895, in Dapitan awaiting news regarding his application to serve as a medical doctor in Cuba. This would end his almost four-year exile. He wrote his sister Trinidad: “We celebrated Christmas merrily, as almost always. We slaughtered a small pig and a hen; we invited our neighbors; there was dancing; we laughed a great deal until dawn.” This letter written on Jan. 15, 1896 added: “We did not sleep on December 31 until the New Year.”

Rizal’s letters to his family from abroad (1882-1887 and again 1888-1892) are bursting with detailed descriptions of what he saw and experienced, everything tinged with a sadness, a longing for home because Europe was also exile. He spent Christmas 1885 in Paris as a guest of the Pardo de Tavera family. Writing home he reflected on Christmas and children:

“For the sake of truth, I will tell you that here Christmas and New Year are holidays only for the children and the employees who receive, the former toys and the latter aguinaldos … Since December 24 all the sidewalks of the boulevards are filled with baraques or small stores of toys, fruits, etc. like the Quiapo fair (Baraque is pronounced barac from which barraca originates). A multitude stroll there: children, young and old people. Feasts are organized by the government for the children only; actors, actresses, and artists contribute freely for the enjoyment of the young who know how to respond well to this solicitude by behaving very judiciously.

“I do not get tired admiring the education of French children … compared to the children there, be they Spanish or Filipino. On the street, in the bus, in the carriages, in their promenades, in the house, everywhere, they behave well: they do not shout, they do not cry, they do not disturb … they do not fight … In the big bazaars where families go for shopping, there’s a big showroom full of toys that are very pretty; well, the children go there, they look and listen … you would not hear weeping or crying, nor even a suggestion to their parents to buy them those toys … The children of the poor go only to see, none would touch or say a word in a loud voice, but if you could only see those little eyes, you could read all that is going on inside their hearts. This education seems to me conclusive proof in favor of the new system of forming the soul: for the love of the good and honor.”

Rizal must have been an attentive but strict uncle who believed children should be seen but not heard.