Why is democracy losing out to dictatorships? | Inquirer Opinion
Close
menu
search

Why is democracy losing out to dictatorships? 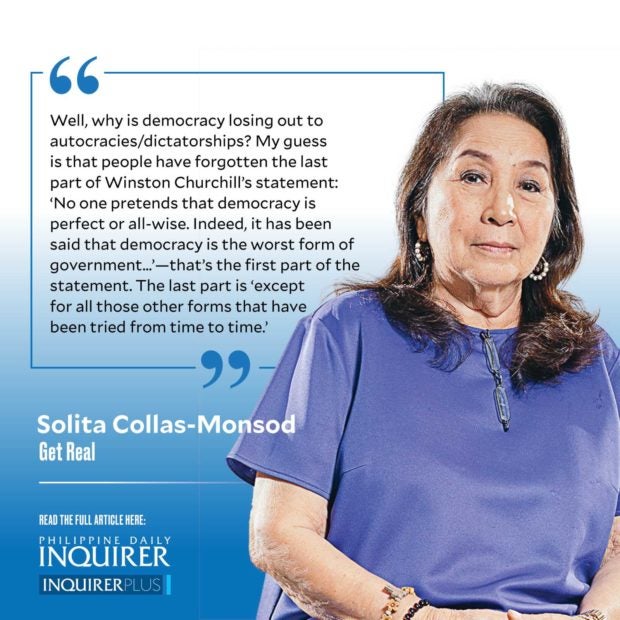 The Summit for Democracy (I wrote about it last week) took place in Washington, DC, last weekend, and has earned fierce criticism and just as ardent advocates, so I could say it was a tie on whether it was a success or a failure.

The criticism arose mostly because of who were invited (and who were not)—most of it centered around President Duterte, Bolsonaro (Brazil), and Modi (India) and why they and others like them should not have been invited. And most of the encomiums came because of the recognition that democracy has been slowly losing ground worldwide to autocracies/dictatorships, and the Summit (there will be at least two) was a good chance to make up for that lost ground.

Well, why is democracy losing out to autocracies/dictatorships? My guess is that people have forgotten the last part of Winston Churchill’s statement: “No one pretends that democracy is perfect or all-wise. Indeed, it has been said that democracy is the worst form of government…”—that’s the first part of the statement. The last part is “except for all those other forms that have been tried from time to time.”

The Philippines tried a dictatorship for well-nigh 14 years—or rather, it was forced on us, but we gave in rather easily. In fact, it was at first very much (but not wholly) welcomed, with such reactions as “well, it is time we were disciplined” and “look at how the country has grown.” But time and what we experienced changed those opinions until the assassination of Benigno “Ninoy” Aquino Jr. became the tipping point, no doubt exacerbated by the crash of the Philippine economy in the international debt crisis. The rest is history.

But now the dictator’s family has been trying to rewrite history, presenting the Marcos dictatorship as some kind of “golden age,” and this has been going on apparently since 2014, when Imelda Marcos made known that her son was qualified to run as president in 2016. The son has built an extensive disinformation network in social media—read Nobel Laureate Maria Ressa’s acceptance speech in Norway.

Ressa’s Rappler actually exposed this in 2019. Apparently, a Rappler database had tracked (as of Sept. 5, 2019) over 360 pages and over 280 groups supporting the family—whether it’s now Sen. Imee Marcos, Ferdinand “Bongbong” Marcos Jr., their late father, or family matriarch Imelda Marcos. The exposé was in three parts—the second being about the Marcos revisionism, and the third being the false narratives—but no one was paying attention.

That is why I find another one of Churchill’s statement’s about democracy just as interesting as the first one: “The best argument against democracy is a five-minute conversation with the average voter.” But the Philippines might be the exception that proves the rule: Presidents Ramos, Estrada, and Arroyo, all of whom in no way could be described as an average voter, supported Rodrigo Duterte’s campaign for the presidency. While President Ramos has changed his mind, he is only one in three. The other two are still supporting the Duterte-Marcos team. It is obvious that these two are after their own good rather than the country’s. Ah, well.

Well, that campaign started off with a bang, but, it is slowing down. The BPI bank account under Cecilia Lazaro and Solita Collas-Monsod (BPI 0290-0110-73) is still open, and there is the letwomenlead.org website that has a payments gateway so you can donate through GCash, PayMaya, and all the other major banks. The webmaster, or whatever one calls him, is working out where people can donate to the website through sari-sari stores or 7-Elevens, or what not. I am a computer idiot, so all I know is that they’re trying to make crowdfunding live up to its name.

Folks, the idea is still a very good one. Let’s make sure it is not ningas-kugon.