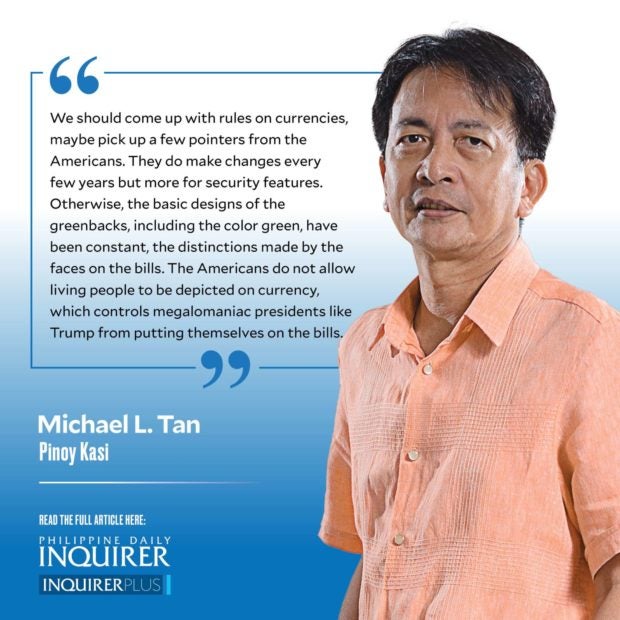 As the song goes from “Cabaret,” money makes the world go round, but in the Philippines, our currency — bills and coins — are making our heads go round. In Filipino, “nakakahilo.”

The latest money problem has been the redesign of the P1,000 bill, ditching our three heroes — Chief Justice José Abad Santos, Josefa Llanes Escoda, and Vicente Lim — in favor of the Philippine eagle instead. As with the descendants of our three heroes, I have no quarrel with having the Philippine eagle on a bill but taking away the three heroes is something else, they being one of the few reminders of Filipinos who died defending our country during the Japanese invasion.

In the case of Josefa Escoda, she is one of only three women who appear on our bills, the other two being Corazon Aquino on the P500 bill and, I’m clearing my throat now, Gloria Macapagal Arroyo on the P200 bill, albeit not as the primary figure (her father, Diosdado Macapagal, has top billing).

I wanted to concentrate on a bigger problem and this is our penchant for redesigning our bills and coins, which then creates problems like what we have with the P1,000 bill.

This isn’t the first time we’ve had a problematic P1,000 bill. We are still using the New Generation Currency issued in 2010, with the confusing colors of P100 and P1,000 bills. The P1,000 bill was supposed to be blue and the P100 bill violet but they practically look alike and con artists capitalized on this, able to get away paying for purchases with the P100 bill but which were valued closer to P1,000. There were color adjustments made by the Central Bank but the colors are still too similar for comfort.

We change the designs for our bills and coins too often. Let me share a story to show the complications with these shifts.

In the 1990s, my paternal grandmother gave me a large box with peso bills telling me she might die any time soon and wanted to give me the money she saved, keeping them under the proverbial mattress.

I looked at the bills and had to keep a straight face. I never told her these were Bagong Lipunan bills issued between 1973 and 1985 under Marcos and which were demonetized in 1993, several years after his fall. The money had as much value as the Mickey Mouse bills of the Japanese occupation, which toward the end of World War II had to be brought around in “bayong” (straw bags).

Back to the present now.

We should come up with rules on currencies, maybe pick up a few pointers from the Americans. They do make changes every few years but more for security features. Otherwise, the basic designs of the greenbacks, including the color green, have been constant, the distinctions made by the faces on the bills.

Notice there are no women on US dollar bills. There was a proposal in 2013 to have Harriet Tubman, a former slave and a women’s rights activist, on a redesigned $20 bill but this did not push through, said to have been blocked by Trump, or one of his men, when he became president in 2016.

The Americans do not allow living people to be depicted on currency, which controls megalomaniac presidents like Trump from putting themselves on the bills.

We should ask our presidential candidates what their position will be on designs of bills and coins.