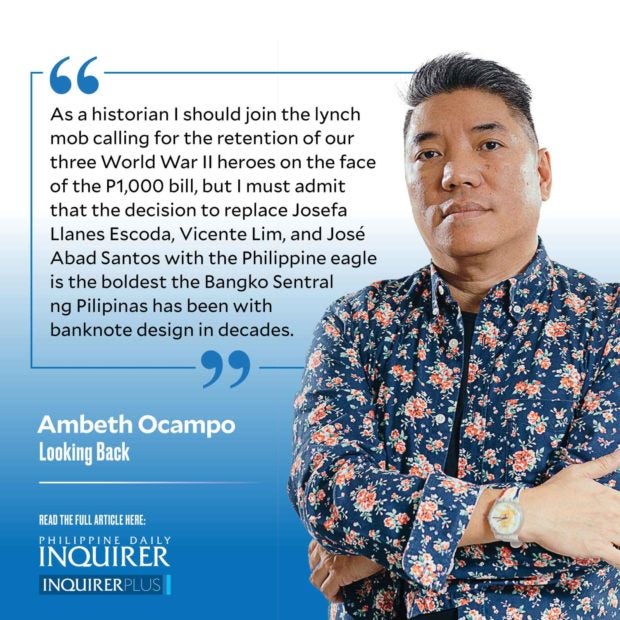 As a historian I should join the lynch mob calling for the retention of our three World War II heroes on the face of the P1,000 bill, but I must admit that the decision to replace Josefa Llanes Escoda, Vicente Lim, and José Abad Santos with the Philippine eagle is the boldest the Bangko Sentral ng Pilipinas (BSP) has been with banknote design in decades.

Filipinos are creatures of habit, a culture that initially resists innovation, this may explain why our first and last Commonwealth presidents, Manuel Quezon and Manuel Roxas, have been smiling benignly from our money since the postwar creation of the Central Bank of the Philippines. Sergio Osmeña, the Commonwealth president missing from the set, joined the gang on the P50 bill when our banknotes shifted language from English to Filipino. Osmeña has been on our banknotes since the late 1960s.

Our first banknotes as a free and independent nation are known to numismatists as the “English Series” because the text on them was in English, and these were printed by Thomas de la Rue in England. These notes were in circulation from 1949-1969, a period when Quezon and Roxas were considered “contemporary” compared to the 19th century heroes of the Philippine revolution that dominated the lower value notes: Apolinario Mabini (P1), Jose Rizal (P2), Marcelo H. del Pilar and Graciano Lopez Jaena (P5), Mariano Gomes, Jose Burgos, and Jacinto Zamora (P10), Andres Bonifacio and Emilio Jacinto (P20), Antonio Luna (P50), and Melchora Aquino (P100). With no gender balance at the time, Melchora Aquino, the lone woman in our first was later demoted to the 5-centavo coin with a feminine scalloped edge. Women were absent from our banknotes from 1969 to 1991 when Josefa Llanes Escoda joined two other men on the face of the P1,000 bill.

The nine denominations in 1949 were populated by 10 heroes, one heroine, and two presidents. The six notes currently in circulation are populated by two heroes and one heroine from World War II and six political personalities: five presidents (Quezon, Osmeña, Roxas, Macapagal, and Aquino) and one would-be president Ninoy Aquino. In 2009, studies were presented to the BSP to replace all the personalities in the banknotes who had been overstaying since 1983 with heroes of culture and the sciences: Fernando Amorsolo for Painting, Guillermo Tolentino for Sculpture, Jose Garcia Villa for Literature, Teodoro A. Agoncillo for History, etc. The proposal was not acted upon leaving the most notable innovations in the 2010 New Generation Series with all personalities re-presented as their younger selves, and Corazon C. Aquino was added to the P500 Ninoy Aquino banknote. The Cory-Ninoy banknote was signed and obligated by their son Noynoy, then President of the Philippines. Some wags commented that the BSP should have included Kris and Bimby in the banknote to complete the family. Another innovation in the New Generation Currency was replacing Gloria Macapagal Arroyo on the back of the P200 with a tarsier.

The P1,000 banknote, as the highest denomination is a natural target of forgers and should carry the most security features available. First line of defense against counterfeiting is the portrait on the face of the note. Take a look at all the strands of hair and microdots on the face of Benjamin Franklin on the $100 note and you will understand how all the feathers and sharp details on the proud Philippine eagle will make counterfeiting more difficult. The political subtext to this issue, however, is that the Philippine eagle, that appears in our passports by the way, has been appropriated as a symbol by Sara Duterte. Then there is the fear of historical revisionism; replacing all the people on our banknotes with animals is a quiet way to get rid of the Aquinos and their legacy screaming from the yellow P500 bill. One can believe what one wants to believe these days, but this issue is definitely for the birds.