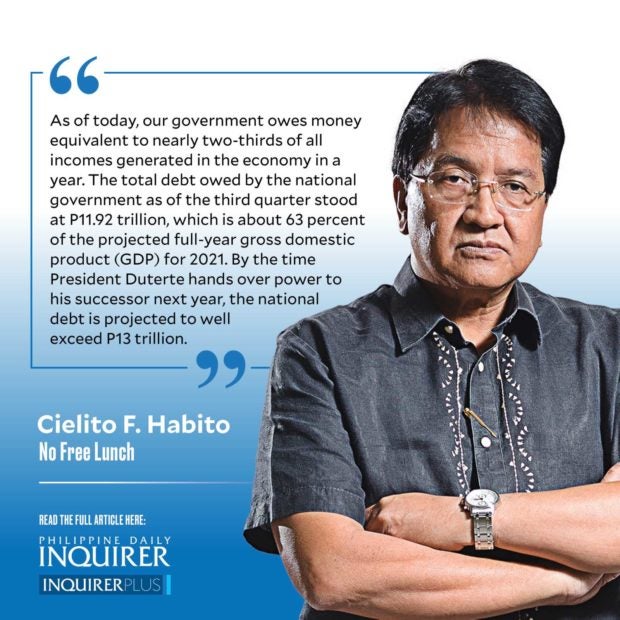 As of today, our government owes money equivalent to nearly two-thirds of all incomes generated in the economy in a year. The total debt owed by the national government as of the third quarter stood at P11.92 trillion, which is about 63 percent of the projected full-year gross domestic product (GDP) for 2021. The World Bank reported over the weekend the approval of a new $600 million (P30 billion) loan package for the Philippine government. By the time President Duterte hands over power to his successor next year, the national debt is projected to well exceed P13 trillion.

That debt grew by more than half (55 percent) in the last two years, from P7.7 trillion in 2019, even as the overall economy has barely grown since. Like most other governments around the world, increased borrowing was the only recourse to meet the great cost of managing the serious impacts of the COVID-19 pandemic on public health and on the economy. In 2019, the total national debt amounted to only 39.6 percent of the P19.5 trillion GDP. Some 16 years before, that national debt, while only P3.36 trillion, was at the historical peak of 78 percent of GDP, and the country was teetering at the edge of financial collapse. The debt burden was so heavy that at its worst, nine out of every ten pesos of revenues collected by the government just went to interest and principal amortization payments for the government’s debt. So the only way to keep the government running to serve the needs of the people was to keep borrowing more.

Fortunately, a country’s national debt is not the same as the debt of a person or family, which must be fully paid off at some point. The difference between a family and the government is that the latter can keep rolling over its debt—that is, borrow new loans to pay off previous ones—indefinitely into the future. Thus, we need not be unduly alarmed at the thought, as some like to (misleadingly) describe it, that every Filipino carries around P107,000 in debt on his/her head (i.e., P11.92 trillion of national debt divided among 111 million Filipinos), as if we’d all have to pay such amount sooner or later.

The other difference is that a government can actually choose to print more money to pay off its debt. Many governments actually did that irresponsibly in the past, but that was before it became more widely understood that doing so indiscriminately would be counterproductive, as it leads to heightened price inflation, even hyperinflation if carried too far. Central banks know that the supply of money in the economy should not outpace the growth of actual production of goods and services (measured by GDP), because “too much money chasing too few goods” will naturally and inevitably push prices up.

The key is to manage debt so that the burden of debt service payments does not overwhelm the government the way it did ours before. In the end, the question boils down to how much debt a country can sustainably carry and not risk a fiscal collapse, or social unrest, or both. A debt-to-GDP ratio of 60 percent is considered the threshold beyond which sustainability is put into question. To stabilize the ratio, debt must not be allowed to grow faster than GDP does.

So where do we stand as far as our ballooning debt is concerned? As the saying goes, misery loves company. The fact is, we are far from alone in seeing public debt escalate in the wake of the pandemic, which flattened economies and shrank tax revenues amid hiked spending needs. Countries with much higher debt-to-GDP ratios than our current 63 percent include Japan (225 percent), Singapore (150 percent), the United States (135 percent), and Spain (123 percent), although these are strong economies able to collect more taxes relative to GDP than we can. But the other positive factor now in our (and everybody else’s) favor is the relatively low interest rates that help keep debt service costs lower than they used to be in the past.

What’s crucial is that we outgrow our debt, the way we managed to do since our last fiscal crisis, especially after 2010. That means we should make sure the money we borrow effectively leads our economy to grow faster, and to the benefit of all Filipinos.