On Dec. 8, journalist Jesus “Jess’’ Malabanan was shot by two assailants while he was watching television inside his family’s store in Calbayog, Western Samar. At almost the same time, Emiliano Muncal, village chief of Barangay Inspector in Santa Rosa, Nueva Ecija, was shot dead in front of his house by riding-tandem suspects.

The day before, Mayor Darussalam Saguindilan Lajid of Al Barka town in Basilan and his security aide Barad Nuruddin were killed when four gunmen on motorcycles ambushed them as they were on their way to a seaside mosque. Mayor Alih Awal Sali of Akbar town in the same province was with Lajid during the ambush; he survived but is still in critical condition.

In all three incidents, the perpetrators carried out the murders with the same impunity that has characterized the vigilante killings occurring with horrific regularity under the Duterte administration. And like most of those assassinations, the latest killings are likely to remain unresolved for years — additional entries in the police files marked “deaths under investigation.”

Malabanan, a former defense reporter who relocated to Pampanga as a correspondent for various media outfits, was hit by gunshots fired at close range. Retired Reuters correspondent Manny Mogato, who was part of the Reuters team that won the Pulitzer Prize in 2018 for its coverage of the administration’s “war against drugs,” said Malabanan, its longtime stringer, had contributed a lot to the reports. He further revealed that Reuters had helped relocate Malabanan back to Samar after the reporter had gotten threats to his life in San Fernando, Pampanga.

But Undersecretary Joel Sy Egco, executive director of the Presidential Task Force on Media Security, thinks Malabanan’s killing had nothing to do with his stories on the drug war — “because it is remotely possible that an enemy in Pampanga would send an assassin” to Calbayog.

He disclosed that Malabanan had sought protection in 2017 because he felt he was under surveillance for helping with the Reuters report.

“We stationed intelligence agents around his residence and placed him under constant watch so we can get who was tailing him. But it was negative,” said Egco. 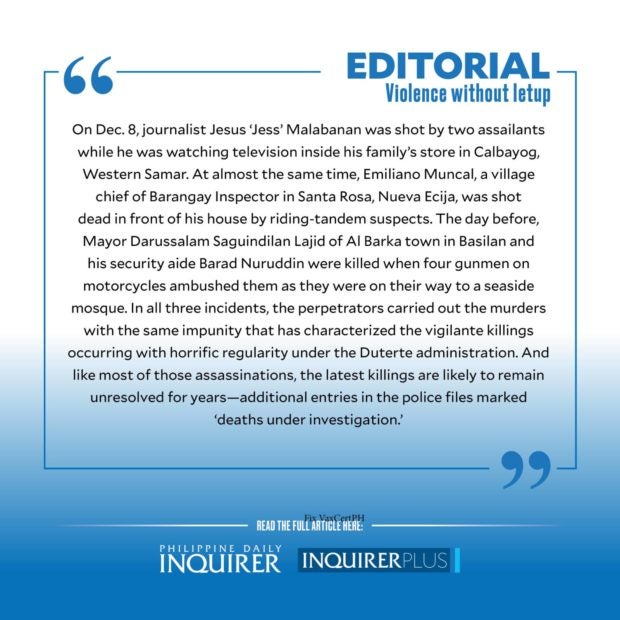 While ruling out the killing as work-related, neither the Palace nor the police has offered any leads on the latest media killing. Philippine National Police Chief Gen. Dionardo Carlos formed a special investigation task group to investigate the incident, and said: “The PNP is doing its best to immediately identify and arrest the person responsible for Malabanan’s death.”

As in Malabanan’s case, no suspects have yet been identified in the murders of Muncal, Lajid, and Nuruddin. Lajid’s killers were said to have even changed vehicles—some on a motorized boat and others in a car—as they fled.

The violence can only be expected to worsen as the campaign for the 2022 national and local elections kicks in, aided by the government’s dismal inability to put an end to the bloodshed stalking the land.

At least 63 lawyers, prosecutors, and judges have been killed under the present administration. Malabanan, meanwhile, is the 22nd journalist slain under President Duterte’s watch — but, according to Egco, “don’t believe in the propaganda that journalists are really being directly targeted here for being journalists. There’s an ocean of reasons.” Before becoming a Palace functionary, Egco was himself a journalist.

Doctors, activists, environmental workers have also been targeted, on top of the thousands of drug suspects who have ended up dead in police operations.

Sounding like a broken record, Commission on Human Rights spokesperson Jacqueline de Guia once again called on the PNP to “exert all efforts” to address the unending violence, particularly Malabanan’s ominous killing. “Without bringing the perpetrators to account, this episode of violence further worsens the climate of impunity and affects the freedom of the press to conduct their work without fear,” said De Guia.

When killers are not brought to justice, warned Sen. Grace Poe, “the pattern is bound to be repeated and will embolden lawlessness.’’ The pattern is here, and it’s been happening without letup.