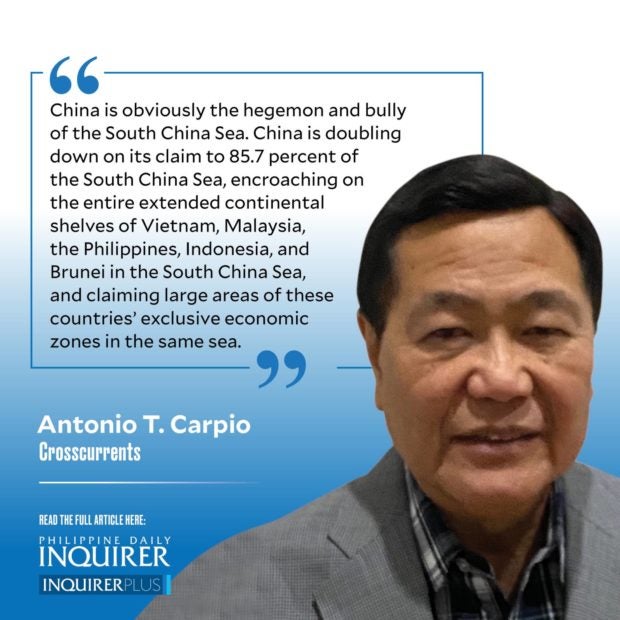 In February of this year, China enacted a new Coast Guard law that clearly violates in a very fundamental way the UN Charter and Unclos. China’s new law authorizes its coast guard to use armed force to implement China’s nine-dash line claim even beyond China’s territorial sea, exclusive economic zone, and extended continent shelf in the South China Sea. This violates the fundamental principle in the UN Charter and Unclos that no country can use armed force, or threat of armed force, to settle territorial or maritime disputes. China’s new coast guard law brings back the world to the turbulent era before the 1945 UN Charter, when armed force or war was a legitimate means of acquiring territory or settling disputes between states. China is obviously overturning the prevailing international system with its new coast guard law.

Once the arbitration is concluded, the same Asean states can enter into a convention that in their exclusive economic zones and extended continental shelves in the South China Sea there is freedom of navigation as guaranteed under Unclos and customary international law. Such a convention can be open to accession by other countries, including the United States, United Kingdom, France, Japan, Australia, India, and all other coastal states of the world. If China does not join this convention, it will again be isolated.

The arbitration and the convention will be peaceful means of settling the South China Sea maritime dispute in accordance with Unclos. As to the territorial dispute involving geologic features above water at high tide in the Paracels, the Spratlys, and Scarborough Shoal, sea level rise will submerge all these features by the turn of this century and beyond. These submerged features will form part of the exclusive economic zones of the adjacent coastal states that are within 200 nautical miles from these submerged features. So while man must resolve the maritime dispute in the South China Sea, nature will resolve the territorial dispute.