On the verge of the new year that will see a literal battle between political continuity and change, the Philippine Daily Inquirer is marking its 36th anniversary with a renewed effort to strengthen both its footing and its presence in a crowded field.

Newspapering and journalism committed to truth telling acquire even greater significance at this time when troll farms and spin doctors go the whole hog and the COVID-19 pandemic looms large despite dropping infection rates, making of itself a still formidable factor against which the media, alongside business and industry, have to contend.

The road forward is, although rocky, clear in terms of priorities: to keep our head above water in a battered economy that is heading tentatively toward recovery, and to uphold and protect the content for which the Inquirer is known and trusted. The length of time the Inquirer has traveled from its scrappy beginnings on Dec. 9, 1985, remains a source of wonder and pride among its people, as do the readership and patronage that have expanded since then. Its endurance, whether under a harsh political climate or a pandemic-induced languor, whether embracing the digital era or grappling with the novel realities of working from home, buoys its spirit.

We are, therefore, marking this day as another high point in our collective journey. On the pages of today’s issue is the culmination of the weeklong acknowledgement of the newspaper’s multi-platform growth as well as the women and men, whether in its regular workforce or part of its extended family of readers, letter-writers, contributors, and advertisers, who have made and continue to make this expansion possible. It is to them and our ongoing partnership that the Inquirer’s mission to deserve and earn trust through its content is directed. 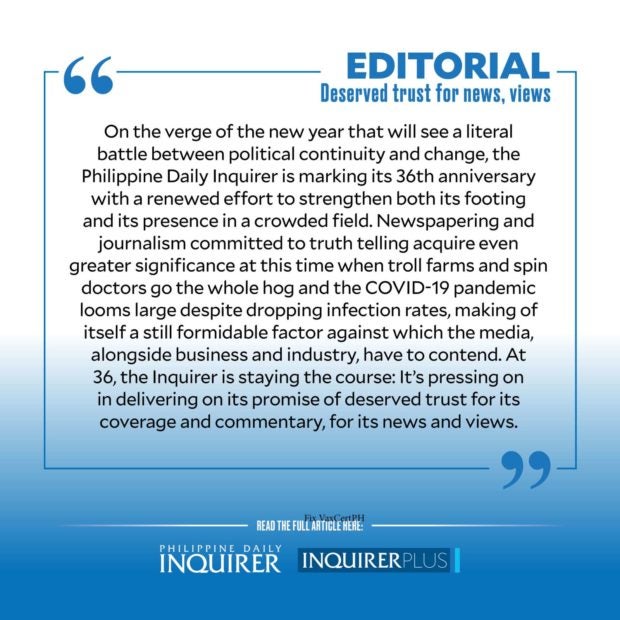 As Inquirer president and CEO Rudyard Arbolado tells his interlocutor Cathy Cañares Yamsuan somewhere in this issue, “Content should be relevant and address the readers’ needs. It should not just give updates on the day’s issues but also provide a helpful perspective.” Here is where the Inquirer makes it personal for its readers who, Arbolado observes, “are actually telling us: Inspire me, educate me, divert me [to new useful stuff].” It’s a dynamic give and take that has sustained a relationship of trust on one hand and, on the other, the delivery of reliable information necessary for making a correct choice.

The reportage in Inquirer News, backed by Inquirer Research for deep backgrounding, seeks to keep readers updated on developments in the burning issues, including those unresolved even as the years wear on, and to some extent provides helpful angles previously unnoticed. Inquirer Opinion, in leading the national conversation, supplies the reasoning for certain crucial standpoints and the arguments on which to base a specific principle (and possibly, as an offshoot, even the grounds on which to meditate on the number of angels that can dance on the head of a pin). The rest of the sections pitch in to meet readers’ information needs, such as Inquirer Sports’ coverage of the Tokyo Olympics including Hidilyn Diaz’s thrilling gold victory, arguably the most comprehensive in these parts.

According to the formulation of executive editor Volt Contreras to Yamsuan, the Inquirer can be “both as a Liwasang Bonifacio for the citizen and, a jeepney ride away, a Divisoria for the consumer, so to speak, for truthseeking and for trendspotting”—in the process providing both “engaging” and “high-calorie” content. We persevere in performing the task of content distribution using different formats and platforms old and new, such as inquirer.net, InquirerPlus, the newsletters produced by the paper’s sections, and social media cards aimed at readers in a rush. We are mindful of the reality that in the digital era, to shirk at innovation is to miss out on opportunities for connection and to be excluded from the mainstream.

Still we strive to keep our unique identity, whether exemplified in photographs that leap out of the page, reportage on the imperiled state of human rights, the brutal war on drugs, or powerful people losing it in official functions, or in special reports on a frayed educational system or the bane (massive unemployment) and boon (flourishing flora and fauna) of the pandemic.

The journey, while rewarding, has not been smooth; as experienced by other media companies, the economics and politics of truth telling in this part of the world is — par for the course — fraught with uncertainty and risk. But at 36, the Inquirer is staying the course: It’s pressing on in delivering on its promise of deserved trust for its coverage and commentary, for its news and views.