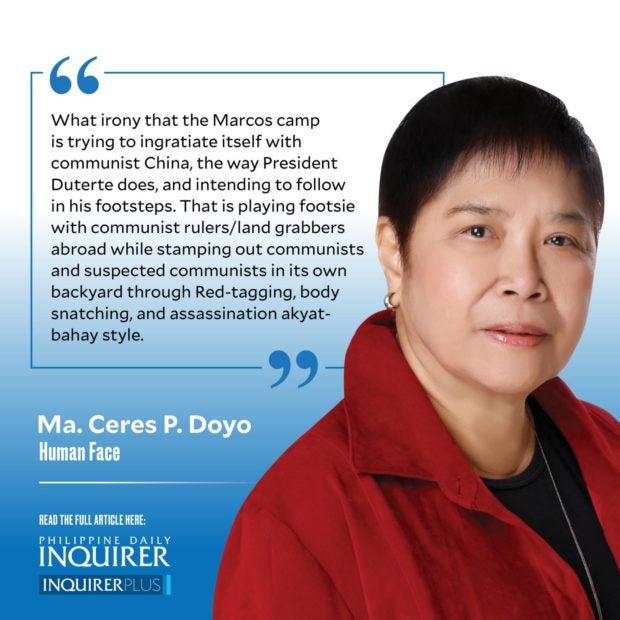 In the event that Ferdinand Marcos Jr. wins as president in 2022, I cannot imagine the Communist Party of the Philippines-New People’s Army-National Democratic Front (CPP-NPA-NDF) in peace talks with a Marcos, something the CPP-NPA-NDF had done with several past and the present administrations. So far, there has been no laying down of arms on the part of the insurgents despite so many talks that, as expected, turned out fruitless.

The communist armed insurgency continues. Societal injustices exacerbated by the excesses of Marcos’ martial rule helped in its growth. On the 26th of this month of December, the CPP marks the 53rd anniversary of its founding. It is Asia’s longest-running communist insurgency and it refuses to die though its counterparts in other countries had capitulated, lost steam, or triumphed but at a costly price.

Think of the scenario of peace talks between a Marcos administration and the armed insurgents that the Duterte administration classifies as terrorists. This time, if it can happen at all, the conditions or demands of the CPP-NPA-NDF would be steep and hard to meet. That is, besides the usual freeing of political prisoners, their comrades who have been convicted and are serving time.

I imagine that front and center of negotiations would be something that had never been included in past talks. And that would be the return of the Marcoses’ ill-gotten wealth in its entirety amounting to billions of dollars, something the Marcoses cannot deny, else why would the Swiss government return funds worth P10 billion from Marcos accounts on condition that this be given as compensation to more than 11,000 victims of human rights violations of the Marcos dictatorship? There, I cannot repeat it often enough.

That happened during the term of President Benigno Aquino III, through Republic Act No. 10368 passed by the Senate and the House of Representatives and which Aquino ratified. What each victim had received — that is, after several years of processing by the Human Rights Victims’ Claims Board — cannot compensate for their sufferings and loss of loved ones. But separately, more hidden and ill-gotten wealth in banks, properties, jewelry, and artworks are being sought by the Presidential Commission on Good Government and the lawyers of the close to 10,000 human rights violations victims-claimants who had won the class suit in Hawaii. There is more out there waiting to be discovered.

I am told that a common belief among those who are rooting for Marcos Jr. is that they would get a share of the fabled gold bars, dollars, and whatever else kept by the Marcoses. I have heard it for myself. It has not occurred to these gullible folk that being handed part of the manna/loot is pure fantasy.

So conjure up a Marcos win and the ensuing peace talks with the insurgents. If I were a caricaturist, it would look like what Tagalog speakers call maghahalo ang balat sa tinalupan. I am beside myself with amusement while imagining it.

But seriously, during the reign of Marcos Sr. that lasted 21 years, 14 years of them under dictatorial rule and martial law, many Filipinos who were not even adherents of the Maoist communist ideology forged alliances with ideologues and joined the struggle for freedom. Many consciously aligned themselves with the so-called left-leaning democratic front. After Ninoy Aquino was assassinated in 1983, alliances were cemented further to topple the Marcos dictatorship.

In a talk show, the dictator’s daughter, Sen. Imee Marcos, said Filipinos started the animosity with China when they filed a case at the international arbitral court at The Hague disputing China’s territorial claims in the West Philippine Sea. What she said begged for a follow-up question. So let me do the asking: Huh? We did?

What irony that the Marcos camp is trying to ingratiate itself with communist China, the way President Duterte does, and intending to follow in his footsteps. That is playing footsie with communist rulers/land grabbers abroad while stamping out communists and suspected communists in its own backyard through Red-tagging, body snatching, and assassination akyat-bahay style. Or through protracted battles such as the one where 42-year-old poet and Red fighter Kerima Lorena Tariman died in a hail of bullets.

A Marcos win will fuel the armed insurgency. 1980s redux, a déjà vu.