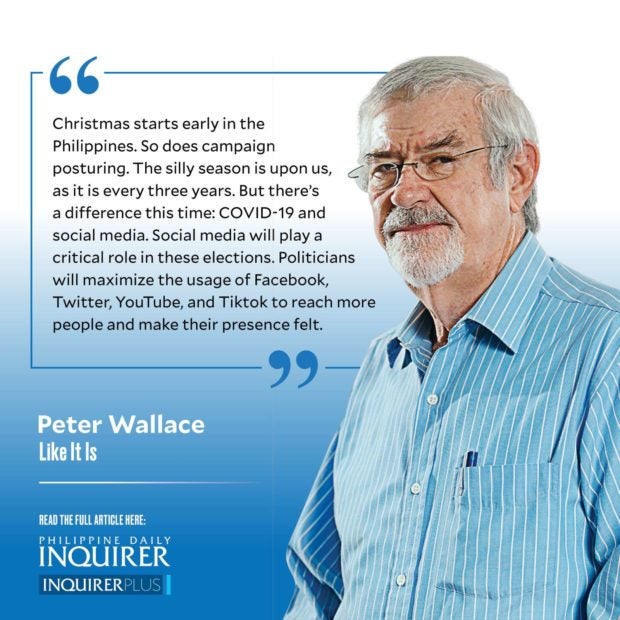 Every opinion writer and his dog (in my case three German Shepherds) are going to be analyzing the upcoming elections to death. I see no reason why I should be an exception. So here goes, a starter piece.

Christmas starts early in the Philippines. So does campaign posturing. The silly season is upon us, as it is every three years. But there’s a difference this time: COVID-19 and social media. (Disclosure, I don’t participate in any social media, so I rely on my staff to interpret where needed).

Social media will play a critical role in these elections. Politicians will maximize the usage of Facebook, Twitter, YouTube, and TikTok to reach more people and make their presence felt. But as the use of social media increases, so will the presence of paid trolls whose role is to spread fake news and malicious information. Worryingly, trolls will play a significant part in spreading fake news and shaping the minds of voters in this election. They already have.

Manny Pacquiao has amassed the largest following on Facebook (18.5 million) and Twitter (2.6 million), way more than other presidential candidates. However, this could be mostly because of his international boxing stardom, so a significant chunk of people who follow him on social media could just be boxing fans, some from other countries who won’t be voting for him.

In terms of maximizing the use of social media for the campaign, no other candidate can as of now edge out Bongbong Marcos. He has had for some time a dominant and organized presence on all major platforms, including YouTube and TikTok, which have become important grounds for his followers to attempt to cleanse the reputation of his father, the late dictator Ferdinand Marcos Sr. On Facebook, where he has 4.2 million followers, one post can generate hundreds of thousands of likes and comments.

Other candidates also have decent social media followings. Isko Moreno is strong on Facebook (5.3 million followers) and actually has more followers than Marcos. But his level of interaction (e.g., likes and comments) pales in comparison with that of the latter. Leni Robredo rules Twitter despite only having 655,000 followers, thanks mostly to her very active supporters.

Ping Lacson is trailing well behind his opponents in terms of social media following. And Bong Go just withdrew his candidacy.

Based on its recent guidelines, the Commission on Elections is allowing house-to-house campaigns, conventions, rallies, and motorcades in areas under Alert Levels 1 to 3, but with varying levels of restrictions due to the continuous threat of COVID-19. Despite this, social media in its various forms, together with TV and radio, will be the dominant influence. It’s there that you’ll have to look to see how the candidates are doing.

TV is still a viable and reliable platform to boost the popularity and awareness of national candidates. According to the same survey, 91 percent of the population get their political news from TV. So candidates with deep pockets and the backing of tycoons are expected to flood TV with their commercials as the campaign season unfolds. Radio also holds a major influence, especially in far-flung provinces where internet connectivity is not strong. The same survey showed that 49 percent of Filipinos get their news also from radio.

Only a minuscule 3 percent of Filipinos get their political news from newspapers such as the one you’re reading now. But an overwhelming 94 percent of voters are in Class D and E; they’re the ones who will decide the election.

The presidential candidates will be making promises they think the voter will want to hear to vote for them. Those promises will be irrelevant to what they’ll actually do. What one must look at is the history of the candidate and what he or she has done, or equally hasn’t done, to indicate what to expect into the future. This is particularly true for the presidency where a career of achievement surely should be a necessary qualification for such a demanding job. As it now stands, that is not the case.

What’s coming out of this zarzuela is that parties have become meaningless names with no firm ideology, aspirations, or loyalties. It’s become all centered around one person and his or her winnability. This is no way to run a democracy.