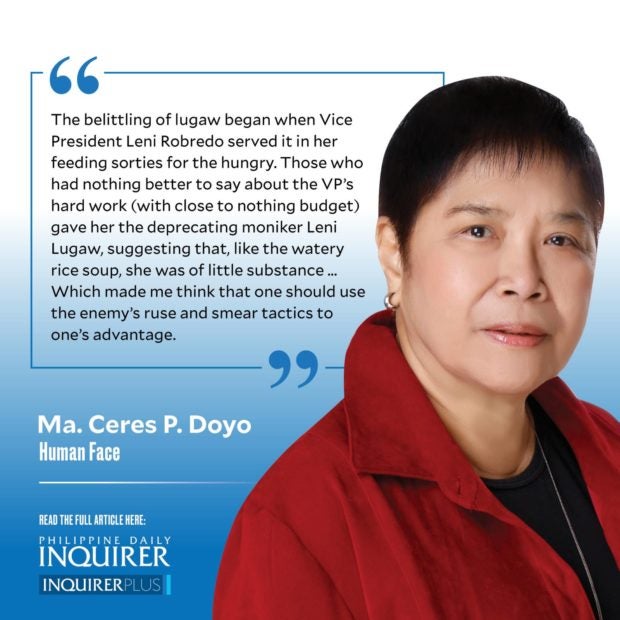 Like the community pantry for the hungry that Citizen Patricia Non began inauspiciously in her Quezon City neighborhood last April and was immediately duplicated all over the country by inspired citizens, the simple lugaw (rice porridge or congee) has risen to national prominence and fired the hearts of many.

The belittling of lugaw began when Vice President Leni Robredo served it in her feeding sorties for the hungry. Those who had nothing better to say about the VP’s hard work (with close to nothing budget) gave her the deprecating moniker Leni Lugaw, suggesting that, like the watery rice soup, she was of little substance.

To recall, lugaw also got media mileage when a rider who was delivering ordered lugaw was stopped at a checkpoint and prevented from proceeding because lugaw was not on the list of so-called “essential” items. That was the time when the words “essential” and “nonessential” were on the lips of those who wielded the whip, so to speak, during the lockdown. The recorded repartee between rider and guard was one for the books.

Lugaw is considered lowly fare when resorted to by those short in rice supply for their family. More water is used as extender. But lugaw, because of its light consistency, is also fed to the convalescent who may not tolerate heavy solid food.

But come to think of it, lugaw takes many forms, from simple to fancy, from austere to calorie-laden depending on what goes with it. Chinese restaurants offer congee with different ingredients and choice toppings, with slices of century egg and chopped herbs completing the yummy dish. I remember the late Good Shepherd nun Sr. Christine Tan (she knew food places with character and history) taking me to Chinatown for a yummy congee breakfast so early the resto owner was still in his sando and we laughed at that. Office employees frequent the place for a piping hot morning fix, she said.

The Filipino arroz caldo of sticky rice with chicken bits, ginger, toasted garlic, spring onions, a dash of patis, and a squirt of calamansi is a meal in itself. My healthy version has cream dory fish slices, quartered fish tofu, carrots, toasted garlic, and, in the absence of spring onions, fresh chives from my garden. Don’t forget the sesame oil.

Whoever declared last Saturday, Nov. 20, LugawOne holiday to boost VP Leni’s run for the presidency, to raise awareness and feed the hungry, was spot on. Pink (Leni’s campaign color) was the landscape and lugaw was on the menu. Pink Caravans for Leni in cities and towns have been going on in the past weeks since she filed her certificate of candidacy at the Commission on Elections. Now, lugaw.

Husband-and-wife friends of mine, a chef and a doctor of psychology, set up their own lugawan outside their home. Various groups, religious sisters among them, served lugaw in disposable paper bowls with Leni labels.

There are spoilers, of course. Like those fake online orders of grocery items worth hundreds of thousands, delivered to the Office of the Vice President and two opposition senators. They were to be paid upon delivery. Pity the unsuspecting riders who were soaking in the rain. Good thing the supermarket took back the items at no cost. Whoever planned this evil scheme will get their just rewards in the form of karma.

Which made me think that one should use the enemy’s ruse and smear tactics to one’s advantage. Like senatorial candidate Chel Diokno whom President Duterte singled out, during one of his rambling, incoherent tirades, for his prominent front teeth. Diokno, a human rights lawyer, had face masks made with his toothy grin on it.

Even without funds to fuel her run, Leni’s campaign motors on, thanks to her supporters who, on their own, are thinking out of the box, so to speak, by creating and spending for their own campaign materials and activities to make known her platform, what she has done as a public servant in the past years that she served as representative of her district and as VP, what she is and what she is not.

The lugaw initiative can become a lugaw imperative. Serve lugaw, multiply the lugaw.