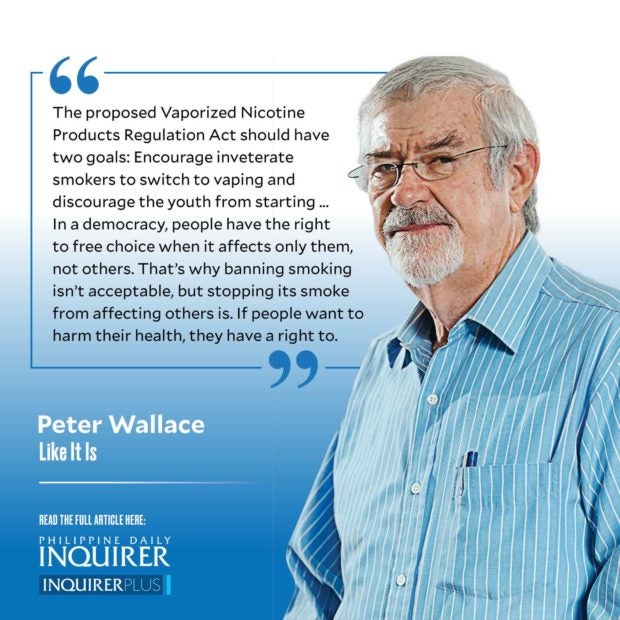 The proposed Vaporized Nicotine Products Regulation Act should have two goals: Encourage inveterate smokers to switch to vaping and discourage the youth from starting.

The Senate will be discussing what to do about vaping in the coming days. So let me add my two cents’ worth (actually, with inflation it’s two dollars’ worth), particularly on one issue that has arisen that shouldn’t even be an issue: the age to allow vaping.

Before I do, let me be clear from the start: I am against tobacco use in any form. But I have to accept realities, and the reality is that no matter what you do, some people will inhale tobacco. The hideous pictures on tobacco packs, and the graphic warnings and restrictions, have resulted in some success. But not enough. Millions still smoke.

Some 110,000 Filipinos die from tobacco-related illnesses every year, much more than COVID-19. Anything that can be done to reduce that number must be done. Smokers can’t just stop, they are addicted to nicotine. But they can switch to less harmful methods of feeding that addiction. That’s why I favor heated tobacco products as they have far less of the harmful ingredients in them.

However, some highly respected health officials recently came out denouncing the use of heated tobacco products, saying there was no scientific evidence of their benefits. Whether that’s the case or not, I think there’s one indisputable fact: E-cigarettes may or may not do harm, but it’s less harmful than cigarettes. Admittedly, no one is sure yet what the long-term effects may be, but they can’t be worse than a product that kills 67 percent of those who smoke. So, surely, the effort should be to convince smokers to stop. But if they won’t, and huge numbers won’t, then convincing them to switch to something less harmful is the obvious thing to do.

The British government has recognized this. It has long been an advocate of vaping—and it has worked. In the past decade, the number of adults who smoke has fallen from 20 percent to 14 percent. And the UK expects it to fall to 5 percent by 2030. Here, 22.7 percent of adults are tobacco smokers. Obviously, anything that will bring that down also to 14 percent has to be tried. The UK government has now gone a step further and given medical approval to vaping, so doctors can write a prescription to overcome the safety concerns some smokers have.

The US Food and Drug Administration (FDA) agrees, and has confirmed that vaping is less risky than smoking and that the benefit of accepting a product that is less harmful than smoking is greater than the risk. But, also, that its use should be monitored to ensure that the youth don’t start. That’s where sensible control should come in. Last December 2020, it authorized the sale in the US of IQOS 3, a more advanced electrically heated tobacco system by Philip Morris.

It’s good that Congress recognizes this. House Bill No. 9007 and Senate Bill No. 2239 both accept that vaping is not good, but is preferred to smoking. Nonetheless, they would impose restrictions similar to cigarettes. That defeats the purpose. The restrictions need to be less onerous to encourage a switch, but also designed to stop new entrants. Because that is what allowing vaping should be all about. If I had my druthers, I’d ban them both, but the world hasn’t gone that far yet. Maybe one day it will.

In a democracy, people have the right to free choice when it affects only them, not others. That’s why banning smoking isn’t acceptable, but stopping its smoke from affecting others is. If people want to harm their health, they have a right to. Otherwise, McDonald’s and all the other fast foods would be banned. As would alcohol (ruining my evenings), and sugary drinks and soda. Where would you stop?

Regulation is what can be done, and that’s the role of Congress to determine who and how. The Inter-Agency Committee on Tobacco, chaired by the Department of Trade and Industry Secretary and vice-chaired by the Department of Health Secretary, is responsible for implementing the Tobacco Regulation Act of 2003. So e-cigarettes, which is a tobacco product, should be under this agency’s control, along with cigarettes. The FDA is not the correct agency, as some have suggested, as e-cigarette is not a health product.

The Senate will sit soon on this bill and, among other issues, what may come up is at what age do you allow vaping. Both its bill and the House counterpart say 18. That makes sense, yet there’s a move to make it 21. Under what logic, I don’t know. You can smoke cigarettes at 18, drink alcohol at 18, vote at 18. It’s the official age of majority. Why would you single out vaping restrictions to be different and worse than for cigarettes?

What should be done is that the bill should be designed to encourage smokers to switch. But it should also require the agency to monitor the sale of vaping products to ensure there are sufficient controls being implemented to deter young people from starting.