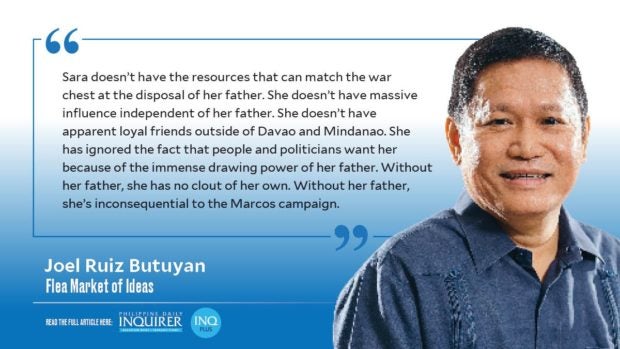 It has all the makings of the classic story of the prodigal child. A rebellious daughter defies her father and runs away from him. She is egged on by, and enticed to join, her scheming friends. To the great dismay of her father and loyal supporters, she renounces all the wealth and power that have been readied to ensure her enthronement as her father’s successor in the seat of power.

The story is still unfolding in real life, its conclusion uncertain. But it has taken major twists that are reshaping the presidential election.

The rebellious daughter is Davao City Mayor Sara Duterte, who publicly defied all the well-laid plans of her father, President Duterte, for her to succeed to the presidency. The cast of wily friends who worsened the wedge between father and daughter includes presidential candidate Ferdinand Marcos Jr., Rep. Martin Romualdez, and other leaders of the Lakas-CMD party, which counts former president Gloria Macapagal Arroyo as titular head.

Sara was consistently leading in all the presidential surveys prior to the deadline for the filing of candidacies. Her father and his allies had commandeered the PDP-Laban party and reserved for her the party’s nomination for president. With her father as the present incumbent, the entire government machinery and the backing of an overwhelming number of provincial leaders would have been at her disposal. Business leaders who have benefited from her father’s presidency would have lined up to bankroll her candidacy.

Everything was at Sara’s feet—all the formidable advantages that come with being the anointed heiress-apparent of the incumbent president. Yet, she threw it all away. Why?

For one, there’s the wrong influence of the “barkada” who are the usual culprits in any prodigal child story. In Sara’s case, they’re the political “barkada” whose enticements she has chosen to follow over her father’s entreaties. But based on the turn of events, the biggest reason appears to be the existence of deep emotional issues between father and daughter. They’re not on speaking terms at the moment, judging by their media releases. It has become a contest of wills, a game of dare, between the two. It’s no different from a child who threatens to leave the parental home and the father dares him/her to go ahead.

By choosing to run for vice president, Sara wants her father to go her way, and for her to dictate her own terms. But by doing so, she has squandered her political future. She lost sight of the goal. Once the furor dies down, Sara will realize that as a vice president who may end up not deeply allied with the president, she would be inconsequential, and she would be a literal spare tire. By choosing to run as vice president, she has taken herself out of the picture, out of the game, and she has rendered herself unimportant. Even this early, she must already be feeling a loss of interest in her and, therefore, a loss of power.

In fact, Sara has become a liability to Marcos Jr. Angered at the treachery, Mr. Duterte has launched scornful attacks against Marcos Jr. The President has described Marcos Jr. as a “weak leader with baggage.” He has even cited the alleged cocaine addiction of a presidential candidate, giving hints that had people pointing to Marcos Jr. as the unmistakable contender being alluded to.

Marcos Jr. thought he hit the jackpot that guarantees his victory when he convinced Sara to run as his second fiddle. But, instead, his worst nightmare has become a reality.

He is being made to realize that hell has no fury like a father defied and betrayed.

Will the prodigal daughter return to her father’s fold and run as Sen. Bong Go’s vice president? I have enough popcorn on hand as I sit and watch how the story will end and how it will shape our country’s future.