Broadband internet speed in Metro Manila and three other regions in Luzon will be an impressive 200 megabits per second (mbps) by February 2022. That was the promise made by the Department of Information and Communications Technology (DICT) when pressed by Sen. Grace Poe last week on the status of its National Broadband Plan (NBP), an undertaking that aims to provide “universal, fast, reliable, affordable broadband internet services to Filipinos in a digital economy.”

According to a report from global monitoring firm Ookla Speedtest, as of October this year, Singapore led in broadband internet speed with 188.11 mbps, followed by Thailand with 173.44, and Hong Kong with 170.48. The Philippines’ record was a middling 45.52 mbps, putting it at 71st out of 181 countries. In 2017, the Philippines was 94th out of 133 countries.

The slow pace at which the country has risen in the global rankings has been blamed on a number of reasons. Aside from the usual bureaucratic red tape, a lack of adequate budgetary support is cited by some as a major problem, stemming from the lack of appreciation of the critical importance of information and communications technology in spurring economic development despite the ubiquity of the internet, e-commerce, and social media.

At the Senate hearing on the DICT’s budget last week, Poe inquired about the status of Phase 1 of the NBP, and whether the agency could finish it despite huge budget cuts made by the Department of Budget and Management. She asked if the agency could deliver on its promise of faster internet across government offices in four regions once Phase 1 was finished. Regions I, III, the National Capital Region, and parts of Region II “will actually feel the 200 mpbs speed as committed by the government” only once Phase 1 is completed by February 2022, she pointed out. 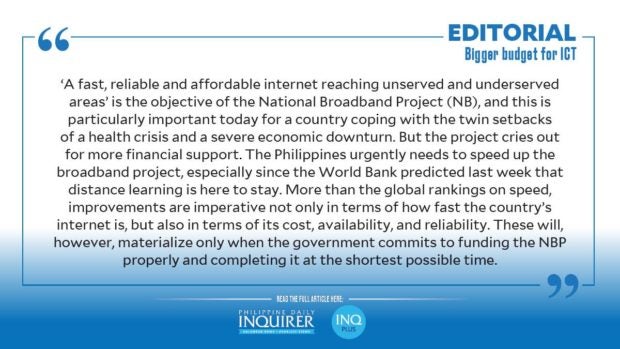 However, there are two other phases of the NBP, and the projects that need to be undertaken for these will cost about P16 billion. For 2022, which is when the last two components of the NBP are set to start, “what is given to them [the DICT] is only P4.5 billion,” said Sen. Ronald dela Rosa, who was defending the department’s budget. DICT Secretary Gregorio B. Honasan II lamented that the government ought to better appreciate the value and importance of digital transformation initiatives today, as these play a key role in helping people not only navigate through the pandemic but also spur economic productivity. “We have observed that the entire ecosystem is limited in the appreciation for ICT-driven connectivity that will allow us to manage effectively and proactively. The government has yet to fully understand that ICT is the future, especially during the pandemic,” he said.

“A fast, reliable and affordable internet reaching unserved and underserved areas” is the objective of the NBP, and this is particularly important today for a country coping with the twin setbacks of a health crisis and a severe economic downturn. In unserved and underserved areas, which are mostly far-flung areas that private telco companies have little incentive to pay attention to because of the small revenues they can generate there, millions of schoolchildren need internet services to be able to keep up with 21st-century education. The World Bank has warned that lack of internet connectivity has been a major contributor to the dismal performance of Filipino children at this time of distance learning.

Under the present telco duopoly, nearly half of the population still lacks or has very little access to the internet, while the other half is forced to pay stiff prices for private telco services. President Duterte warned during his State of the Nation Address in July 2020 that telecommunication companies would be shut down if they did not improve their services to support government efforts to upgrade the country’s ICT environment. The President’s frustration reflected popular sentiment on the issue. The Duterte administration approved the entry of a third player, Dito Telecommunity Corp., but its project rollout has been repeatedly delayed by the pandemic.

The creation of the DICT in June 2016 led to the revival of the NBP, the success of which would provide high-speed internet services, wider coverage, and free WiFi to national and local government offices as well as public schools. But the project cries out for more financial support. The Philippines urgently needs to speed up the broadband project, especially since the World Bank predicted last week that distance learning is here to stay. More than the global rankings on speed, improvements are imperative not only in terms of how fast the country’s internet is, but also in terms of its cost, availability, and reliability. These will, however, materialize only when the government commits to funding the NBP properly and completing it at the shortest possible time.