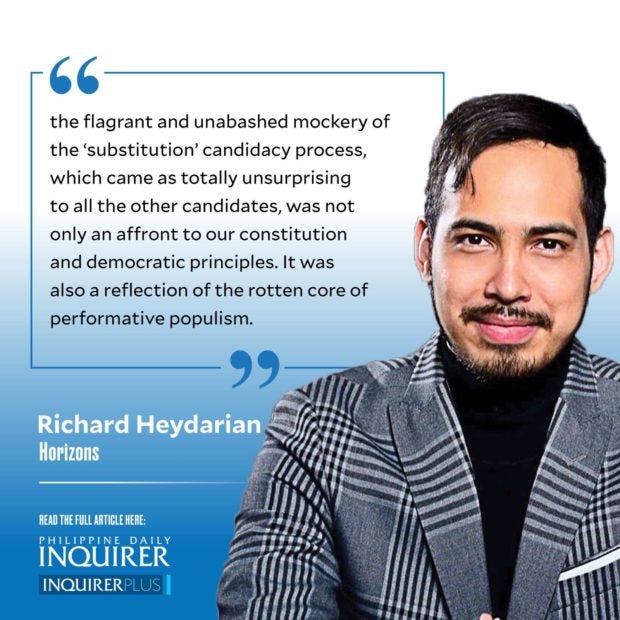 To paraphrase Isaac Asimov, cheap drama is the refuge of the incompetent. The Duterte administration’s “Squid Game”-style plot twists over the weekend were suspenseful enough to warrant some attention, if not dreadful anticipation. To be fair, the roller-coaster plot turned out even more twisted than many had expected, though I doubt it would perform well on the Rotten Tomatoes review-aggregation barometer.

But the flagrant and unabashed mockery of the “substitution” candidacy process, which came as totally unsurprising to all the other candidates, was not only an affront to our constitution and democratic principles. It was also a reflection of the rotten core of performative populism.

From the very beginning of his campaign for Malacañang, President Duterte primarily relied on click-bait antics and contrived authenticity rather than any semblance of competent, modern statesmanship. On almost every objective indicator of actual governance, as attested to by countless global surveys, he has seesawed between mediocrity at best and utter incompetence at worst throughout the COVID-19 pandemic.

What Mr. Duterte has lacked in actual competence, however, he has always sought to compensate for through scintillating drama, albeit of the most vacuous kind. His circus-like maneuvers are symptoms of two major weaknesses, one institutional and the other personalistic.

First, it reveals his utter lack of respect for our electoral institutions and the broader electorate. But it equally reveals the long undeclared rivalry in Philippine politics ahead of next year’s elections: the House of Duterte versus the House of Marcos.

The country is about to pay the price for its past negligence. No self-respecting democracy would have tolerated, let alone elected, someone who openly threatens the very foundations of democratic politics. And a few nanoseconds of critical thinking would have burned through vacuous claims of “political will” and preposterous pledges of solving intractable and complex national issues within a span of only “six months.”

But this is also the product of reckless abandon on an institutional level. Up until today, there are many experts who question the circumstances under which Mr. Duterte was seamlessly allowed to pull off his controversial “substitution” candidacy in 2015.

His decisive victory in the 2016 elections only emboldened his worst instincts, unleashing a catastrophic drug war that has claimed thousands of lives without fulfilling a single public policy objective. So, can one blame him for yet again upping his antics ahead of next year’s elections after such uninterrupted impunity for the past six years?

Still, Mr. Duterte’s unabashed toying with election rules also reveals a fundamental weakness. Unlike his daughter, the President has refused to read the writing on the wall. Neither does he want to end up as a curtain-raiser for the return of the Marcoses.

After flirting with gold, Davao City Mayor Sara Duterte was wise enough to acknowledge that the momentum is on the side of the Marcoses, who have consolidated a nationwide network of support as the de facto standard-bearer of the opposition to the post-Edsa political order. Thus, her 11th-hour decision to settle for (an uncertain) silver in order to head off a bitter clash with the ascendant Marcoses.

After days of suspended anticipation, big party stalwarts such as former president Gloria Macapagal-Arroyo convinced her to give way to Ferdinand “Bongbong” Marcos Jr., who, as the surging candidate, is in no mood to slide down or out of the race for the highest office in the land.

Former first lady Imelda Marcos, 92, is even more impatient for her moment of vindication three decades since their return from exile and, should they prevail next year, exactly five decades since the declaration of martial law by her late husband.

Almost all surveys suggest that the Marcoses are as much on an upward trajectory as the Dutertes are on a downward one. Refusing to succumb to facts, and dreadful of the rapidly shifting balance of forces on the ground, the incumbent has desperately clung on to his “Plan A,” namely running in tandem with his long-time aide, Sen. Christopher “Bong” Go.

But by dividing the House of Duterte, and splitting the Mindanao vote among multiple contenders, he might end up strengthening the hands of the opposition, which can now worry less about a Marcos surge in the South. The race has now entered a twilight zone.