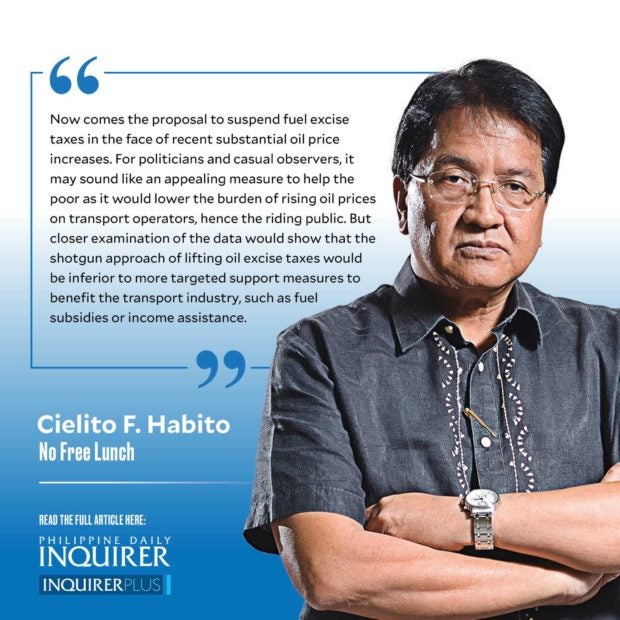 Our history is replete with policies having the effect of a shotgun that inflicts unwanted collateral damage outside of the targeted objects of the policy — even when rifle-focused solutions would have been better. The thing about shotgun solutions is that they are usually easier to do; one could aptly describe them as “lazy policies.” I’ve written on several of them here, the latest example being the militaristic lockdowns our government imposed to quell the pandemic. They turned out to have had little impact on flattening our COVID-19 numbers, but led to the worst recession our country has seen in our modern economic history, and possibly the deepest in the world in the pandemic’s wake. An effective testing and tracing strategy would have permitted more rifle-focused interventions, but the very official tasked to lead our tracing system admitted it to be a failure, while systematic mass testing was never really undertaken.

Import controls on rice and other farm products were the other prominent examples of shotgun policies, meant to help farmers but penalizing far greater numbers of food consumers with much higher prices. Still another is the cabotage law aimed to help domestic shipping companies by barring foreign competitors, but again penalizing consumers with higher transport costs, hence higher prices of various products shipped across the country. In both cases, more focused assistance to the target beneficiaries could achieve the same desired effect sans the wide collateral damage. Such assistance could take the form of effective support to reduce costs via improved productivity (such as technology assistance, access to financing, etc.), or even targeted income subsidies. These could be far less costly than the collateral damage of higher costs imposed on the general public.

Now comes the proposal to suspend fuel excise taxes in the face of recent substantial oil price increases. For politicians and casual observers, it may sound like an appealing measure to help the poor as it would lower the burden of rising oil prices on transport operators, hence the riding public. But closer examination of the data would show that the shotgun approach of lifting oil excise taxes would be inferior to more targeted support measures to benefit the transport industry, such as fuel subsidies or income assistance.

The problem with lifting fuel excise taxes, even temporarily, is that the rich would benefit more from it than the poor. Data from the Family Income and Expenditure Survey reveal that transport expenses, of which fuel cost is a dominant determinant, account for 2.9 percent of total expenditures for families earning less than P40,000 per year. As incomes rise, this percentage progressively rises, up to 7.7 percent for families earning P500,000 or more annually. Based on consumption data across income classes, fuel taxes are progressive (i.e., takes a bigger proportionate bite out of the incomes of the rich than of the poor). Removing that tax would in turn be regressive, benefiting the rich more than the poor.

The Department of Finance (DOF) estimates that an average family in the poorest one-tenth of Filipinos would save P513 a year (representing 0.38 percent of their average income) from suspension of all fuel excise taxes and associated value added taxes. But those among the richest one-tenth would enjoy far more annual savings of P24,202 (a higher 0.82 percent of average income).

Oil taxes also have the important useful function of internalizing the external costs to society of fossil fuel consumption from associated carbon emissions. At this time when fighting climate change is high in the global agenda, cutting fuel taxes would be a move in the wrong direction.

The DOF estimates the revenues to be foregone at up to P147 billion in 2022. Rather than lose this amount and have the unwanted effects cited above, the government could more effectively meet its pro-poor objective if it’s used to subsidize public transport and provide economic relief and social protection for the poor. It should be plain to see that these rifle-focused solutions are superior to the ill-advised and lazy policy of cutting fuel taxes.