Democracy is a struggle 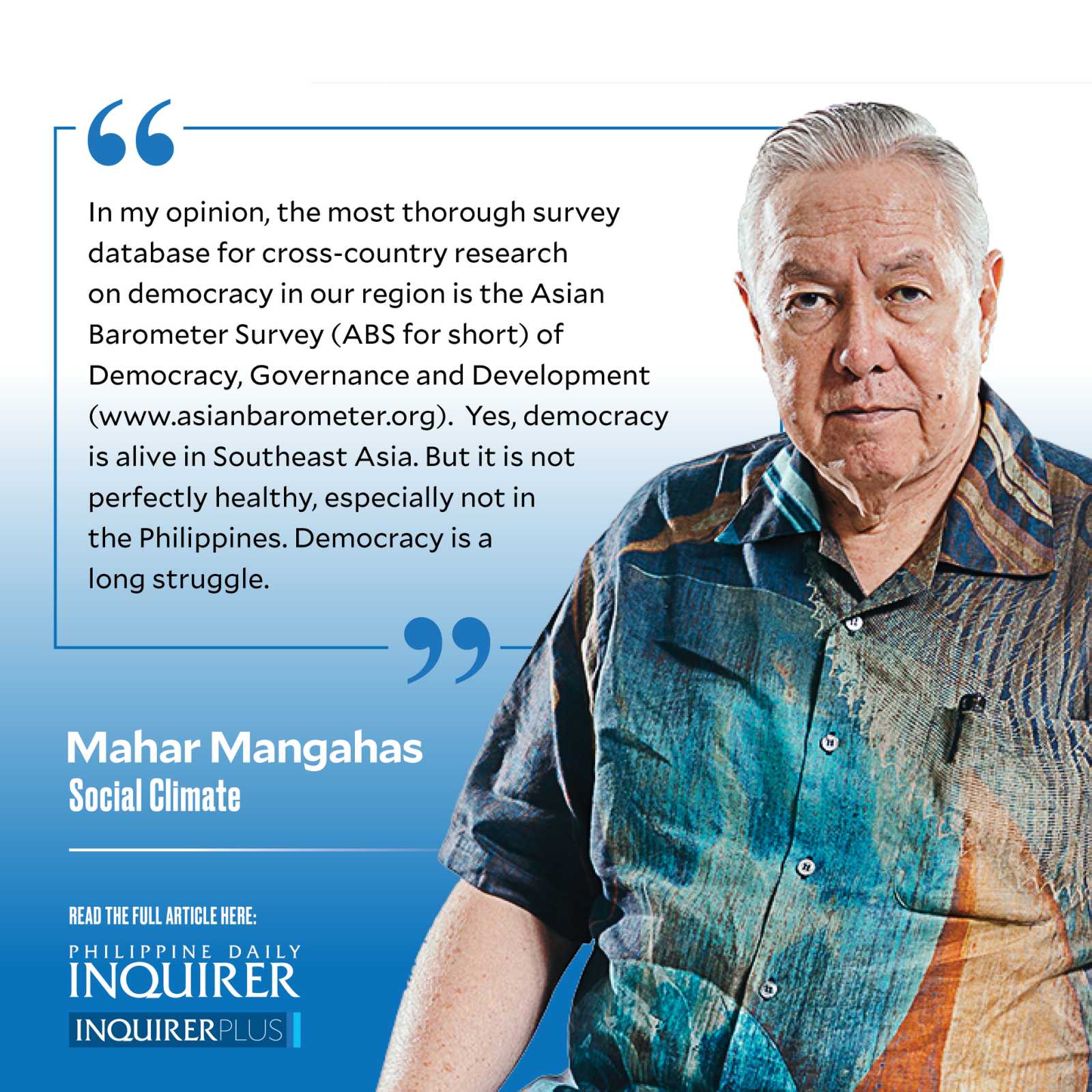 In my opinion, the most thorough survey database for cross-country research on democracy in our region is the Asian Barometer Survey (ABS for short) of Democracy, Governance and Development (www.asianbarometer.org). So far, the ABS has been implemented five times (called “waves”), in 2002, 2005, 2010, 2014, and 2018. Social Weather Stations has been the Philippine member of the ABS network from the start.

The leader of the ABS has always been distinguished political scientist Yun-han Chu, of Academia Sinica and National Taiwan University. In “Re-assessing the popular foundation of Asian democracies: findings from four waves of the Asian Barometer Survey” (ABS Working Paper 120, 2016), he and his co-authors say:

“The survival and consolidation of democracy is only possible with the support of both political elites and ordinary citizens. Democracy cannot survive if elites do not accept the basic rules of democracy, such as respecting electoral outcomes and abiding by the rule of law. At the same time, democracies cannot survive if they do not receive the support of their citizens … When democracy is consolidated, both elites and citizens continue to reject extraconstitutional or nondemocratic alternatives to the regime, even when faced with severe economic or political crisis.”

Thus, analyzing Philippine democracy is a two-fold job of (a) understanding our political actors, and (b) understanding the Filipino people themselves. This column will only deal with the latter.

This survey item—originally from Latinobarometro I think; used in many countries—divides the public into committed democrats, conditional authoritarians, and the indifferent. In 35 SWS national surveys since 2002, the first group has always been dominant, ranging from 47 to 65 percent. The second group has been 15-27 percent, and the third group has been 16-28 percent. (See “Second Quarter 2017 Social Weather Survey: Satisfaction with how democracy works at 80%; 61% always prefer democracy to any other kind of government,” 9/21/2017; SWS continued surveying this item even though it did not always report it.)

In 2014, when SWS conducted the ABS Fourth Wave, Filipinos were 47 percent committed democrats, and 28 percent conditional authoritarians, with the 25 percent balance indifferent. In other ABS countries, the percentage scores of “committed democrats” vs. “conditional authoritarians” were: Taiwan (TW) 47-28, Indonesia (ID) 70-16, Malaysia (MY) 69-15, Singapore (SG) 51-31, and Thailand (TH) 60-31. Thus, Filipinos and Taiwanese were the least committed at that time, compared to their neighbors.

Selected ABS data on democracy in Taiwan and five Asean countries. The cross-country survey figures below—arranged from North to South and then West, with the Philippines highlighted—are from the ABS Fourth Wave (2014), as reported by Professor Yun-han Chu. These are but a few of the many items in the ABS questionnaire, which entails an hour-long interview.

Yes, democracy is alive in Southeast Asia. But it is not perfectly healthy, especially not in the Philippines. Democracy is a long struggle.