Fight, as never before, for our country | Inquirer Opinion
Close
menu
search

Fight, as never before, for our country 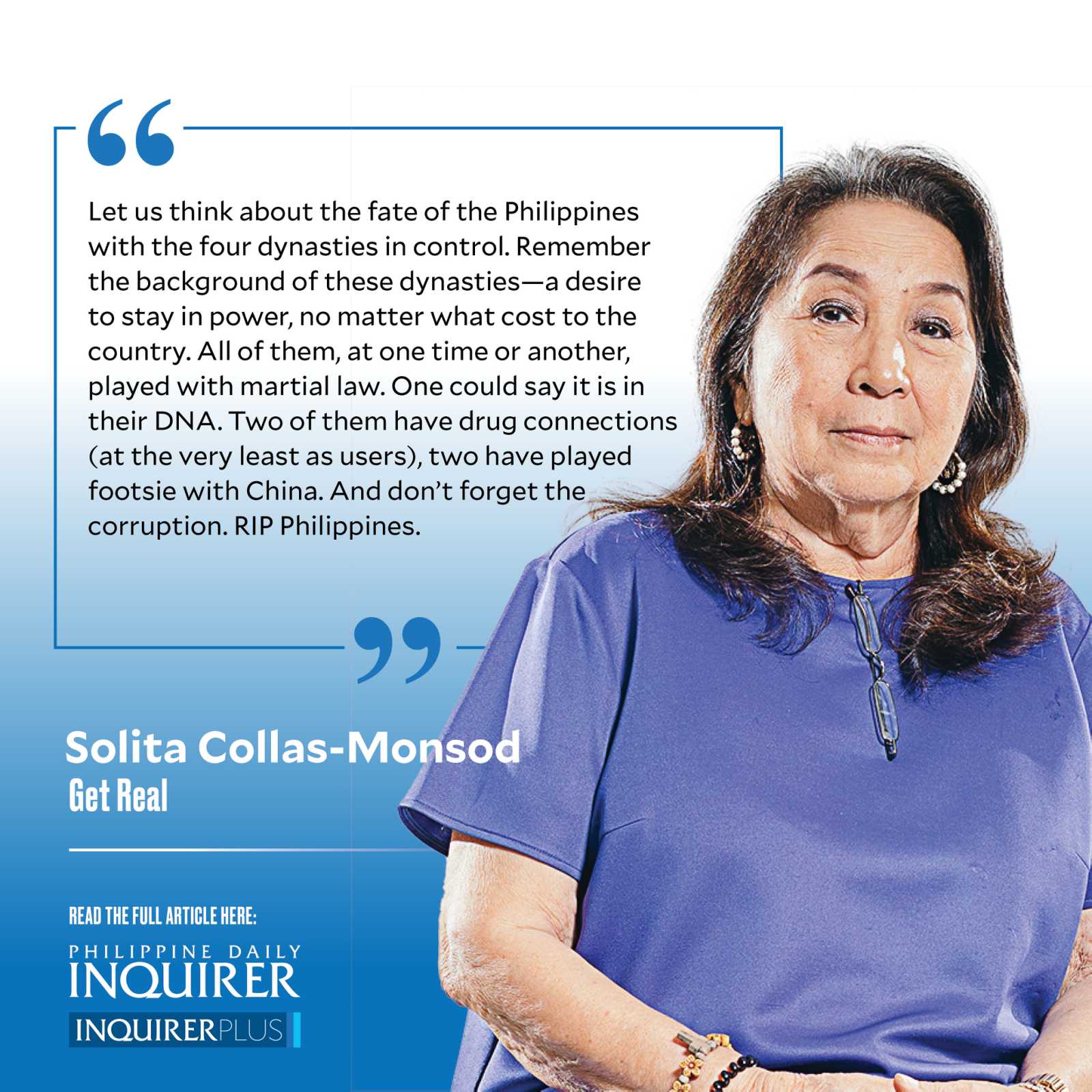 Our local political world has turned topsy-turvy. Remember when 1Sambayan was formed to consolidate the opposition against President Duterte (in whatever guise)? Eventually, their candidate was Leni Robredo.

Now it seems Mr. Duterte is trying to consolidate his position, allying with like-minded forces—Marcos (also a Romualdez), and Arroyo—all to make sure Leni loses.

What you have now are four political dynasties from Luzon, Visayas, and Mindanao poised to control the country. And to cement their alliances, there are even suggestions that they share a presidential term or give executive powers to the vice president, as well as offering all kinds of official goodies to Isko Moreno and Manny Pacquiao (former tuta anyway) in return for their dropping their candidacies or making Leni the target of their campaigns.

There would have been no problem, you see, if Leni had not decided to run. Deals could be made with the other candidates who know the rules of political life and know how to change sides or swear their fealties at the drop of a hat. So tuloy ang ligaya.

But a Leni presidency would be a game-changer. They would have no hold over her—because money has never gotten to her head. Nine years in politics, and still no splashy cars, no large houses, no jewelry, and still taking public transport (!). No potential lines to get to her—her husband (Jesse Robredo would have made an excellent president as well) is dead, her three girls hate politics and drugs.

Moreover, she is the only candidate with hands-on experience working with the poor, the marginalized. Add to that her academic background—economics and law. And no stealing, cheating, killing, or lying in her background.

Good God, these trapos are saying: If she wins, we would have a president who knows what she is doing, is pro-poor, is incorruptible, is beholden to no one! What (shudder) if the people, after six years experiencing this kind of government, realize that they have been shortchanged all this time, and will only ever want this kind of president? Where would we, the dynasties and the corrupt politicians, be? Sa kangkungan.Leni would be the transformative leader that the people need, and that the politicians don’t want. Oh, she is no saint of course, nor does she claim to be. But she seems to be pretty well-grounded in her faith, and her values and her principles follow. Of course, she is subject to temptation, but compared to others, it will take her much longer time to fall.

And that, Reader, is why Mr. Duterte and his ilk are afraid of her. It is a real fear. He dispensed of her services as housing secretary not six months after she was appointed. Fear. (Footnote: The housing sector, according to the Philippine Statistics Authority’s latest StatDev, has NO chance of meeting the targets set out in the Philippine Development Plan 2017-2022.)

Remember how Mr. Duterte was bewailing the failure of his antidrug program? He invited Leni to be the drug czar, thinking she either would turn it down, or fail in it, as he did. She accepted, and shook up the antidrug forces so much with her systematic and rational analysis of the problem and its solutions that he dispensed with her services—only 19 days later, if I recall. Fear.

Now let us think about the fate of the Philippines with the four dynasties in control. Remember the background of these dynasties—a desire to stay in power, no matter what cost to the country. All of them, at one time or another, played with martial law. One could say it is in their DNA. Two of them have drug connections (at the very least as users), two have played footsie with China. And don’t forget the corruption. RIP Philippines.

That’s not all. Should the Supreme Court decide in favor of the Anti-Terrorism Act, this would allow that unholy alliance to use it, and achieve martial law results, without declaring martial law. In fact, my husband, a constitutional law expert, says that the ATA contains provisions that are more harsh and subject to abuse than those provided in the Constitution with martial law, like detention without a warrant of arrest for up to 24 days.

This is not being written, Reader, to encourage us to wring our hands and deplore our fate. It is to underline the fact that we the people have to fight, as never before, for our country.