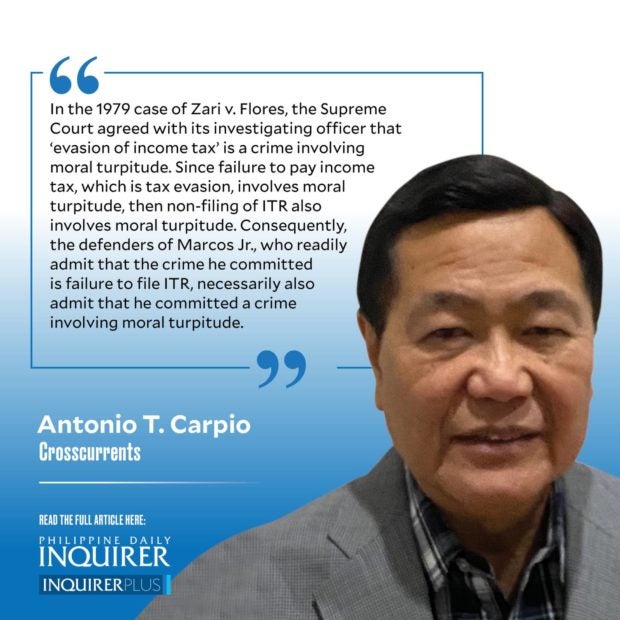 The principal defense of Ferdinand R. Marcos Jr. in the disqualification case is that his conviction for violation of the Tax Code is merely for non-filing of his income tax returns (ITR) from 1982 to 1985 and not for nonpayment of income taxes. Marcos Jr.’s defenders claim that the non-filing of his ITRs did not involve moral turpitude as there was no tax evasion. They assert that Marcos Jr. fully paid his income taxes from 1982 to 1985 under the withholding tax system which applied to his salaries as Vice Governor and later as Governor of Ilocos Norte.

Read Next
‘Wamport’ and other thoughts
EDITORS' PICK
PH logs 37,070 more COVID-19 cases; over 33K others recover
Comelec division junks petition to cancel Marcos COC for president
The best of bayside and city living at SMDC’s Sail Residences
Acer starts the year off strong with the Aspire Vero National Geographic Edition
‘Not yet the end’: Lawyer says Marcos Jr’s DQ cases to take lengthy process
Over 3 Million worth of prizes to be won at Smart Padala’s SENDali Manalo Promo!
MOST READ
NBI foils escape attempt of Kerwin Espinosa, two others
Marcos camp ‘extends hand of unity’ after COC cancellation bid is thrown out
Wendell Ramos finally gets to hold his newborn for the 1st time
No vaccine, no French Open for Djokovic, says French Sports ministry
Don't miss out on the latest news and information.