“Downright oppressive.” That was how Sen. Leila de Lima described the recent proposal by the Department of the Interior and Local Government (DILG) to withhold benefits under the Pantawid Pamilyang Pilipino Program (4Ps) to force the program’s beneficiaries to get inoculated against COVID-19, and thus shore up the country’s lagging vaccination numbers.

De Lima is the principal author of the law that institutionalized and expanded the 4Ps into the cornerstone anti-poverty program that it is today, so she has good reason to denounce what she called the “reprehensible and unacceptable” proposal. The DILG might have been wont to snort at De Lima’s objection given her anathema status to the administration — except that other voices from across the political spectrum have likewise slammed the “no vaccine, no subsidy” plan, which DILG spokesperson Jonathan Malaya justified as merely adding another requirement that recipients have to fulfill to get their 4Ps subsidy.

Objectors were quick to remind Malaya that the law is specific about the 4Ps conditions to be met, and vaccination is not one of them. Justice Secretary Menardo Guverra had to concede that nonvaccination against COVID-19 cannot be used as grounds to suspend or terminate conditional cash transfer benefits to qualified recipients, a refutation that immediately highlighted the typically poor planning and thought that went into the latest simplistic and draconian proposal from the DILG. More grievously, this action will penalize already vulnerable and marginalized groups — some 4.4 million household beneficiaries consisting of the country’s most impoverished citizens who are somehow being blamed for the still-paltry vaccination numbers among their ranks when the fault for that situation lies elsewhere. 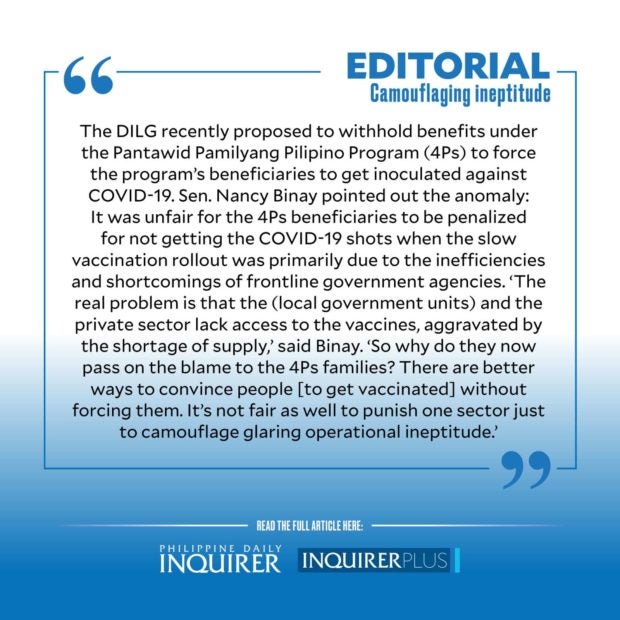 Instead of wrestling with the factors behind the low numbers, the administration would rather once again resort to the whip and the club as it races to meet its target of inoculating at least half of the country’s population by the end of the year to achieve “population protection” — a target already lower than the 70 percent required for herd immunity. As of Nov. 9, around 29.8 million Filipinos have been fully vaccinated, which is just 38.64 percent of the country’s population of 110 million. And among the 4Ps household recipients, only 12 percent have been jabbed.

Sen. Nancy Binay pointed out the anomaly: It was unfair for the 4Ps beneficiaries to be penalized for not getting the COVID-19 shots when the slow vaccination rollout was primarily due to the inefficiencies and shortcomings of the frontline government agencies, from delays in the arrival of the vaccines to their uneven distribution that has led to the “wholesale expiration” of the medicines.

The Department of Health confirmed that some vaccines that were either donated or purchased by the private sector were indeed due to expire at the end of November, leading to the scramble to deploy them to local government units (LGUs). Some LGUs have been able to vaccinate at a fast clip, while others have had no sustained access to the vaccines.

“The real problem is that the (local government units) and the private sector lack access to the vaccines, aggravated by the shortage of supply,” said Binay. “So why do they now pass on the blame to the 4Ps families? There are better ways to convince people [to get vaccinated] without forcing them. It’s not fair as well to punish one sector just to camouflage glaring operational ineptitude.” Binay prodded the DILG to take the opposite route by incentivizing instead those getting vaccinated.

After the backlash, the DILG backtracked a bit. Now it says only “a portion” of the benefit—the health and nutrition grant—was meant to be withheld until a 4Ps individual is vaccinated. It was never its intention, it said, to delist or remove beneficiaries from the program.

Perhaps realizing that force and threats would only be counterproductive, the department is urging LGUs to implement “creative ways” to “change the minds of their constituents, including the 4Ps beneficiaries, from hesitancy to vaccine acceptance and willingness.” Quarters have suggested that local governments tap pharmacy chains and take up the offer of giant fast-food chains to use their space as vaccination centers, and tie these efforts with the planned three-day national vaccination drive from Nov. 29 to Dec 1. Those steps are more like it — doing the hard work of engaging citizens rather than bludgeoning further the poorest of them.

Read Next
Non-filing of income tax return
EDITORS' PICK
Gear up and get ready to play with Yamaha Mio Gear
Marcos-era elections: Not what his son signed up for
If elected VP, Sara Duterte will push for mandatory military service for all Filipinos
Senate bill seeks to penalize employers requiring employees to work during rest hours
Over 3 Million worth of prizes to be won at Smart Padala’s SENDali Manalo Promo!
Acer starts the year off strong with the Aspire Vero National Geographic Edition
MOST READ
Vice mayor slams Vico Sotto for turning Pasig into a ‘puro palabas’ city
‘Sampal sa gobyerno:’ Drilon wants unvaxxed PAO chief barred from working
Jose Manalo’s son Benj pays tribute to late mother: ‘You’re a testimony of God’s love’
Guevarra to Acosta: Obey rules on unvaccinated
Don't miss out on the latest news and information.