Taking one life for another | Inquirer Opinion
Close
menu
search

Taking one life for another

In this critical time when Filipinos are preparing to elect a new leader, the issue of capital punishment once more emerges for fervent discussion. It’s a constant sticking point despite its abolition in the Philippines in 2006: When a particularly gruesome murder is committed, loud cries are heard about the purported necessity of its reimposition in order to “do justice” not only to the victim but also to the bereaved and the shocked society at large. Against the literature and evidence-based arguments debunking the deterrence that capital punishment supposedly offers, high public officials are on record as supporting it and desiring its resurrection; indeed, since he came to power in 2016, President Duterte has called on Congress to reimpose it, saying he needed it to “combat” and “deter” the trade in illegal drugs. (But with a difference: Instead of lethal injection, as his then spokesperson Salvador Panelo said, the President preferred hanging, purportedly to cut costs.)

The issue has again gained traction with two vigorous proponents of the death penalty, Sen. Panfilo Lacson and Senate President Vicente Sotto III, running mates for president and vice president in the 2022 elections, backtracking on their long-held stance and effectively conceding the frightening possibility of an innocent person being wrongfully convicted and eventually executed by the state.

The two lawmakers filed bills in the Senate seeking its reinstatement—Lacson in 2019, citing “the alarming surge of heinous crimes in recent years”; Sotto in 2014 for drug trafficking, although he subsequently took a “neutral” position, saying he had seen “some prisoners who are really innocent, it’s scary.” They have since claimed encountering a road to Damascus in a Netflix film about an activist’s wrongful conviction, and finding life imprisonment a proper punishment for convicts of heinous crimes, a la the United States’ maximum-security (but since-decommissioned) Alcatraz. 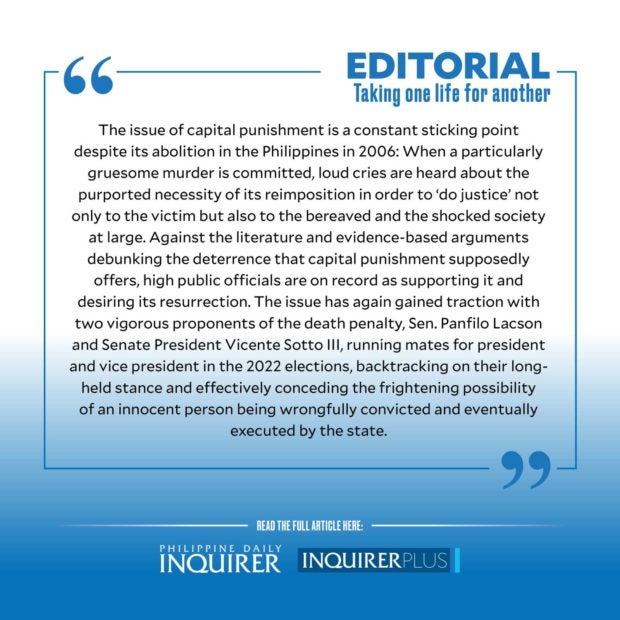 It remains to be seen if other candidates for No. 1 will vocally counter or back the stance of Lacson and Sotto. The issue is, after all, an important point for inclusion in the presidential debates that would hopefully serve to further help the electorate choose wisely. Senators Manny Pacquiao and Bato dela Rosa, both presidential candidates, are ardent death-penalty defenders: In 2016 the boxing champ made the matter the subject of his maiden speech as a senator, invoking both the Bible and the Constitution in claiming the urgency of firing squad or hanging for convicted drug traffickers; just last December the former national police chief and primary implementer of Mr. Duterte’s war on drugs impatiently urged the Senate to start hearings on the pertinent bills filed by Senators Imee Marcos, Bong Revilla, Sherwin Gatchalian, Bong Go, Lacson and Sotto, and himself.

Responding to the change of heart and mind declared by Lacson and Sotto, the Commission on Human Rights (CHR) has called on Congress to throw out all pending measures seeking the reinstatement of capital punishment. Hardly lip service, it’s a predictable, indeed expected, call by the commission that has persevered in upholding “the right to life and dignity of all persons” despite the less than encouraging stance of the state (for example, the combined Department of Justice-Philippine National Police appears not to have given the CHR the time of day in its continuing offer of cooperation in the investigation of drug-related killings).

Lawmakers bent on once more arrogating unto the state the willful taking of one life for another could do worse than take interest in the results of the CHR’s reported study in October 2020 showing that, if provided with alternative punishments to the death penalty, seven out of 10 Filipinos would not support it; that the majority would prefer prison terms for those convicted of drug crimes; and that only three out of 10 Filipinos expressed the strongest support for capital punishment.

In an editorial on March 16, 2019, we pointed out that the Supreme Court acknowledged in 2004 a 71.77 percent rate of judicial error in death penalty cases in local courts, meaning that three of four Filipinos on death row had no reason to be there. “Thousands of poor suspects spend years behind bars without even so much as a hearing, hampered in large part by incompetent or nonexistent legal assistance,” we wrote. It’s “no mystery,” we added, that most of those in Philippine prisons, including death convicts, are impoverished.

There is nothing to show that anything has changed, or that capital punishment has ever succeeded in deterring violent crime. It remains what Victor Hugo said it was in 1848: “the special and eternal sign of barbarity.”