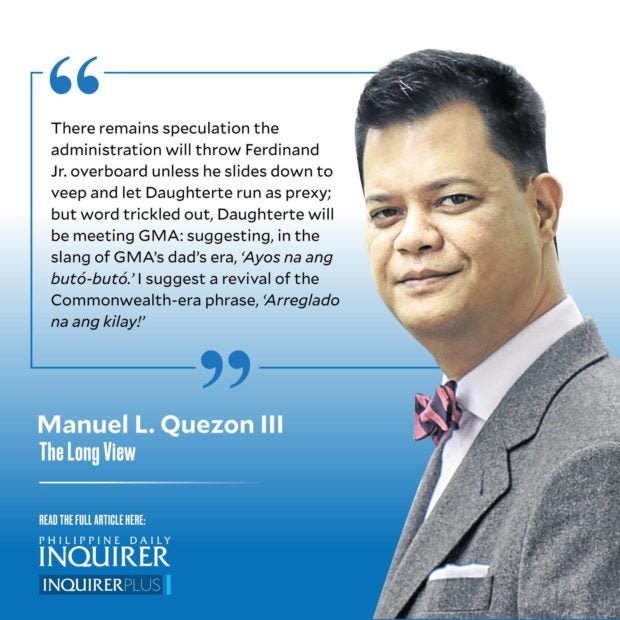 Since what you read in the papers is the first draft of history, the story of the Daughterte saga might as well be set down.

To my mind the story begins with a tale of factions. The first half of the Duterte administration featured a behind-the-scenes battle between two close lieutenants of the President, Cabinet Secretary Jun Evasco and Special Assistant to the President Bong Go. Go won the battle, but his was a dead-end victory, producing no viable successor for the President to anoint.

Evasco, who left the Palace in the midterms to unsuccessfully run in a local race, returned to it to sit out the rest of the term in a powerless sinecure. But his signing on to the otherwise-defunct People’s Reform Party some months back led to speculation he was paving the way for the party to be revived as a vehicle for a Daughterte presidential bid. As of this writing, nothing more has come of it, except the suggestion that the Duterte loyalists behind Daughterte aren’t necessarily the favorite loyalists of President Duterte himself. And there the matter remained stuck, provoking Mon Tulfo to jab at both sides by writing about the tensions between Mr. Duterte and Daughterte, Daughterte and Go, and the confusion over not only who would be the President’s real anointed for 2022, but how this would affect Ferdinand Marcos Jr., who had to anxiously wait and see if the Dutertes would break up the ruling coalition, or keep it together.

One by one the different coalition partners, PDP-Laban and Lakas-CMD, started signaling they were resigned to what might happen. Even Ferdinand Jr. was talked about as exploring whether Manny Pacquiao could be convinced to slide down and thus beef up Marcos’ challenged numbers in Mindanao.

As late as last Monday, Nov. 8, Carolyn Arguillas had a MindaNews story full of interesting background on Ruy Elias Lopez, who was contesting the Davao mayoralty: for at least a couple of weeks, there’d been the suggestion Daughterte wasn’t interested in anything other than the mayoralty, for one of these reasons, take your pick: 1. She was ailing, suggested by her trips to Singapore from time to time; 2. She was uninterested in the political woes of her father; 3. She was facing a genuine challenge and so the family bailiwick needed to be protected.

In most discussions I’d had on the subject, I found it difficult to accept that Daughterte would leave Davao in the hands of either one of her less-than-impressive brothers. Furthermore, for every assurance that her reluctance was only an act, to provide drama and keep everyone guessing, others, including well-informed journalists, could point to sources convinced Daughterte was uninterested in seeking either the presidency or becoming veep. One thread of opinion seems vindicated now: “She has to run out of family loyalty, to save the father.”

The story of the Duterte presidency has been that it required backstopping by adults in the room—the adult-in-chief being former president Gloria Macapagal-Arroyo—who found an obliging understudy in Daughterte: witness their effective congressional coup which gained Mrs. Arroyo the speakership with Daughterte in many ways playing the role of coalition whip to get the votes, with the President caught unawares. As the President and his preferred anointed, Go, both took hits in their ratings (as did Daughterte) the shuttle diplomacy taking place featured Mrs. Arroyo talking to the other pros: the Romualdezes, Daughterte, the Marcoses.

Then came yesterday, which began with bad publicity which Daughterte quickly, and effectively, defused. A top aide was caught up in a drug raid and, before he could resign, the mayor announced that while a resignation had been offered, she’d dismissed the luckless official instead.

By lunchtime, Sebastian Duterte had announced his withdrawal from the Davao vice mayoralty race, upon, he said, instructions from his sister. By merienda time, Daughterte had announced she was herself, withdrawing from the mayoralty race, endorsing her brother Sebastian to run in her place, and the adoption of Melchor Quitain as their candidate for the vice-mayoralty.

There remains speculation the administration will throw Ferdinand Jr. overboard unless he slides down to veep and let Daughterte run as prexy; but word trickled out, Daughterte will be meeting GMA: suggesting, in the slang of GMA’s dad’s era, “Ayos na ang butó-butó.” I suggest a revival of the Commonwealth-era phrase, “Arreglado na ang kilay!”

Read Next
Book bans and burning
EDITORS' PICK
Gear up and get ready to play with Yamaha Mio Gear
PH to import 60,000 tons of fish to cover shortage
Workers are exempted from ‘no vax, no ride’ policy – DOLE chief
#VotePH2022: COVID, power woes loom as poll concerns
Over 3 Million worth of prizes to be won at Smart Padala’s SENDali Manalo Promo!
Acer starts the year off strong with the Aspire Vero National Geographic Edition
MOST READ
Guevarra to Acosta: Obey rules on unvaccinated
PH to import 60,000 tons of fish to cover shortage
Emma Stone calls Andrew Garfield a ‘jerk’ after he ‘lied’ about his ‘Spider-Man: No Way Home’ appearance
Cold-case investigation names surprise suspect in Anne Frank’s betrayal
Don't miss out on the latest news and information.