Yes, I tutored Bongbong in Economics 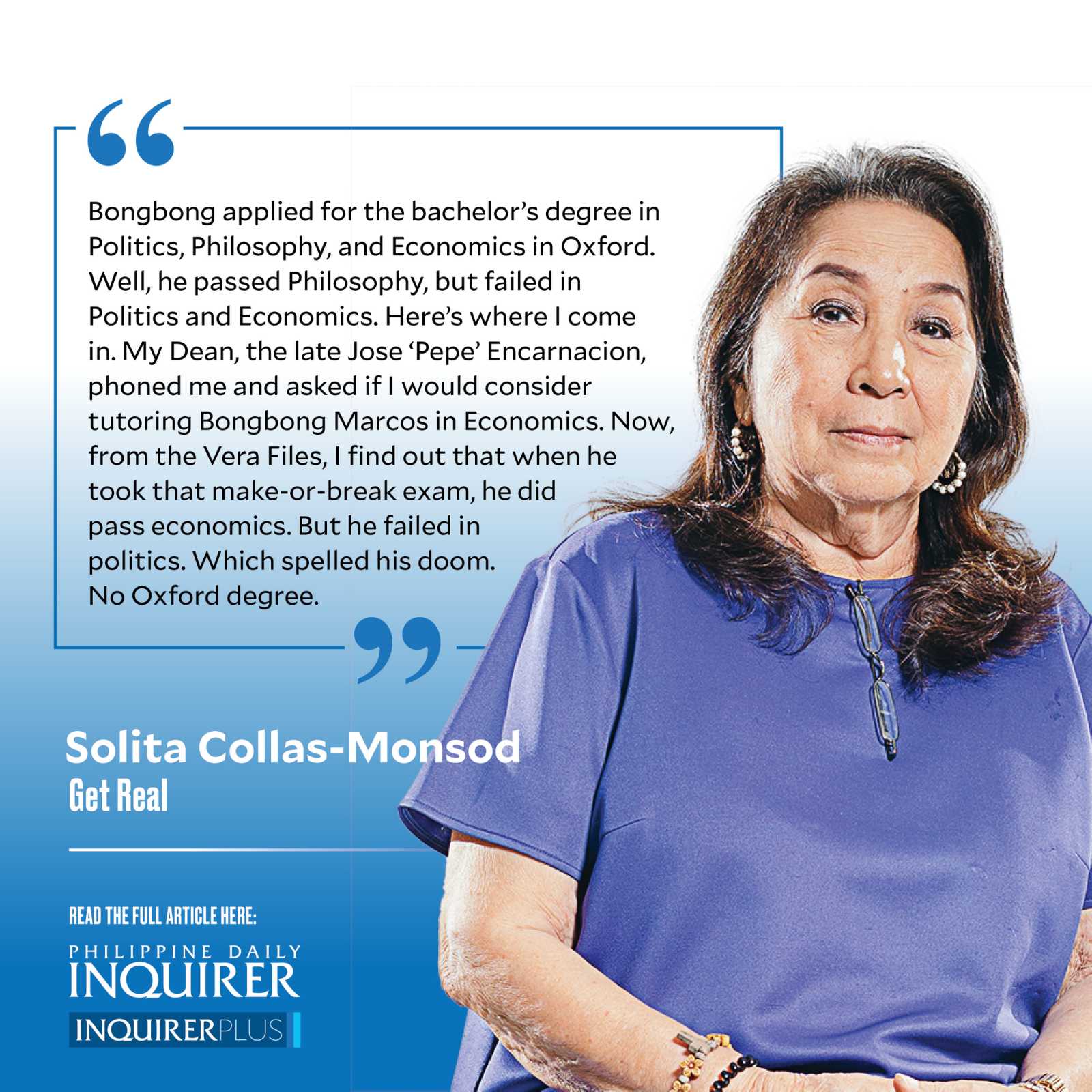 Did you know that UP’s Third World Studies Center has an ongoing research program called the Marcos Regime Research? Three of their researchers—Joel F. Ariate Jr., Miguel Paolo P. Reyes, and Larah Vinda del Mundo—wrote for Vera Files a two-part article based on their research on Bongbong Marcos’ encounters with Oxford University and the Wharton School, University of Pennsylvania. Very timely. What is so fascinating about the article is that it is based on communications between the Philippine ambassador to the United Kingdom, Oxford University, and the dictator Marcos, plus other communications between our ambassadors to the United States and the United Nations and the dictator—all in pursuit of either getting Bongbong admitted or his academic status (in large part failing or incomplete), making excuses for it, or how to improve it. Copies of those original communications are available at the Vera Files website.

Where were those copies obtained? Apparently from the vast array of documents left in Malacañang when the dictator went into exile.

The reason I am bringing this up is that I may have played a small role in what happened. On social media, I have been portrayed as saying that Leni, Peter, Chiz, and Bongbong were my students, and that Bongbong was the worst, or words to that effect. There is also a video of the segment in Unang Hirit where I discussed this issue. Now you hear it from me directly.

The communications are to the effect that Bongbong failed in two of three subjects in the cut-off exam administered by Oxford at the end of his freshman year, to separate, as it were, the chaff from the grain. He applied for the Bachelor’s Degree in Philosophy, Politics, and Economics. Well, he passed Philosophy, but failed in Politics and Economics.

Students were given one more opportunity to pass—after the summer break—with another exam. So Bongbong, or the embassy, was told that this was critical. He must study hard, reviewing politics and economics at Oxford, which meant not going home for the summer, or alternatively, he could be tutored in the Philippines during the break. Oxford even offered to provide copies of past exams, so the tutors in the Philippines would know what to concentrate on.

Here’s where I come in. My Dean, the late Jose “Pepe” Encarnacion, phoned me and asked if I would consider tutoring Bongbong Marcos in economics. He said about four hours maximum, just to explain certain points which Bongbong was confused about. He said that the President had called UP President Onofre D. Corpuz (OD) for a tutor. OD then called Pepe, and Pepe called me and said he would be grateful if I acquiesced to the request. I did. For Pepe.

The thing is, Reader, even then, Dean Encarnacion was not told of the make-or-break exam that would determine Bongbong’s future in Oxford. We were not given his past exam papers to evaluate what was necessary. We were flying blind. Now, with the benefit of 20-20 hindsight, I guess the mystique of the Marcos heir’s intelligence had to be maintained, at all costs. I do not know if OD Corpuz was tasked with providing a tutor in politics—or to do the tutoring himself.

I went to Malacañang at the appointed time and presented myself—Professor Monsod, Bongbong’s tutor. And was asked to take a seat. I waited for 10 minutes, and then asked the man who was there: Where is my student? He shamefacedly said that Bongbong had not yet arrived. I pointed out that in UP, students waited for the teacher, not the other way around. And marched down the stairs.

I called up Pepe and told him what I had done, and he said he would have done the same thing. The next day, someone from Malacañang called me, apologized for the disrespect, asked if I would come back—at my convenience. I said: He better be there.

He was. Bongbong apologized nicely, and we had a two-hour conversation on microeconomics. We had another two hours in macroeconomics on some other day. And that was the last I saw of him for another 20 years.

Now, from the Vera Files, I find out that when he took that make-or-break exam, he did pass economics. But he failed in politics. Which spelled his doom. No Oxford degree. They gave him, instead, a “Special Diploma” in Social Studies, which Oxford is careful to say can be given to undergrads.