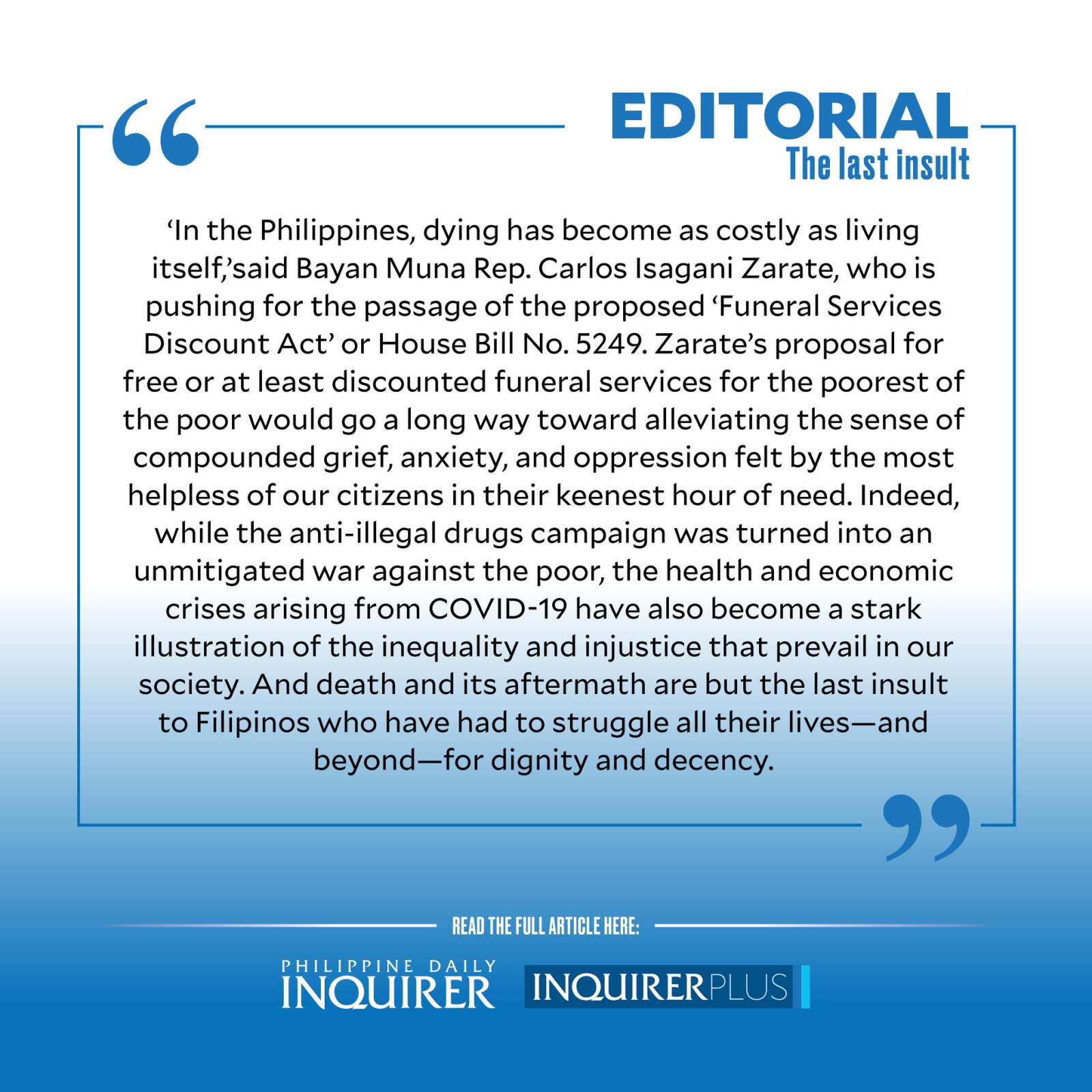 In his play “Henry IV,” William Shakespeare has a character named Feeble declare: “A man can die but once; we owe God a death.”

Everyone dies at one time or another. No one is so fortunate as to escape the debt owed to our Creator the second one is born. Instead, it is the survivors—the loved ones still mourning the passing away of the individual—who are left to pay the debts someone leaves behind. There is the debt of memory, of course, the sudden void that is created when a person, to use another Shakespearean saying, “shuffles off this mortal coil.”

But, in many cases, the debt left behind by the deceased is also a material reality. And in the case of impoverished Filipino families orphaned by two of the biggest disasters to befall us in recent times—the ruthless anti-drug war that has killed thousands, followed by the COVID-19 pandemic which has caused a death toll in the tens of thousands—the debt is not only real and burdensome, it is also painful, heartbreaking, despairing, and may well last a lifetime.

“In the Philippines, dying has become as costly as living itself,” said Bayan Muna Rep. Carlos Isagani Zarate, who is pushing for the passage of the proposed Funeral Services Discount Act or House Bill No. 5249. “… [M]ost Filipinos already live lives of utter poverty and still die poor and indebted till the end,” he added, noting that “funeral services generally are expensive, a stark and difficult reality confronting the large majority of impoverished Filipinos.”

The measure is still pending at the House committee on appropriations even if it has been passed by the committee on poverty alleviation more than a year ago.

Zarate cited a survey done on funeral services by the University of the Philippines School of Urban and Regional Planning in 2005, where the average funeral service package was P25,000, while memorial lots in public and private cemeteries cost an average of P50,000 for a lot package including succeeding lease payments.

These amounts are, by any reckoning, way beyond the means of many Filipino families. Some of them may have had to cope with escalating costs of medical treatment (costs that have risen sky-high in the wake of COVID-19) or have had to scramble for scarce funds to bury a relative after a sudden violent “tokhang” encounter.

To make matters worse, the twin disasters of tokhang and COVID-19 have provoked many mortuaries, funeral parlors, and crematoriums to jack up their prices. Sometimes, as families of tokhang victims have discovered, the sudden spike in prices takes place in connivance with law enforcers and authorities.

A poor family may choose to bury their dead in an “apartment tomb” in a public cemetery, covered by a five-year lease for P5,000. If payments falter during those five years, the remains are removed and the family must search for a private resting place. This happened recently after the cremains of poor victims were removed en masse from a public cemetery.

Other institutions are trying to extend help to fill the void. Parishes under the Diocese of Caloocan headed by Bishop Pablo Virgilio David have offered cheaper funeral rates and free coffins to families of tokhang victims, while assisting the survivors to cope with the loss of a family member or breadwinner. In 2017, at the height of the drug war when dead bodies were turning up in the streets daily, Dennis Febre, a church-affiliated coordinator, told the media that the Church had spent more than a million pesos to help the families of victims. “We cannot wait for government agencies to help,” he said in a Washington Post report. “These are the poor people who cannot even afford to buy their food for the day.”

Such efforts have continued and been joined by other parishes and institutions, including an organization that offers free shelter and food for the homeless and now for families of victims of extrajudicial killings as well. But they are simply not enough; Zarate’s proposal for free or at least discounted funeral services for the poorest of the poor would go a long way toward alleviating the sense of compounded grief, anxiety, and oppression felt by the most helpless of our citizens in their keenest hour of need.

Indeed, while the anti-illegal drugs campaign was turned into an unmitigated war against the poor, the health and economic crises arising from COVID-19 have also become a stark illustration of the inequality and injustice that prevail in our society. And death and its aftermath are but the last insult to Filipinos who have had to struggle all their lives—and beyond—for dignity and decency.