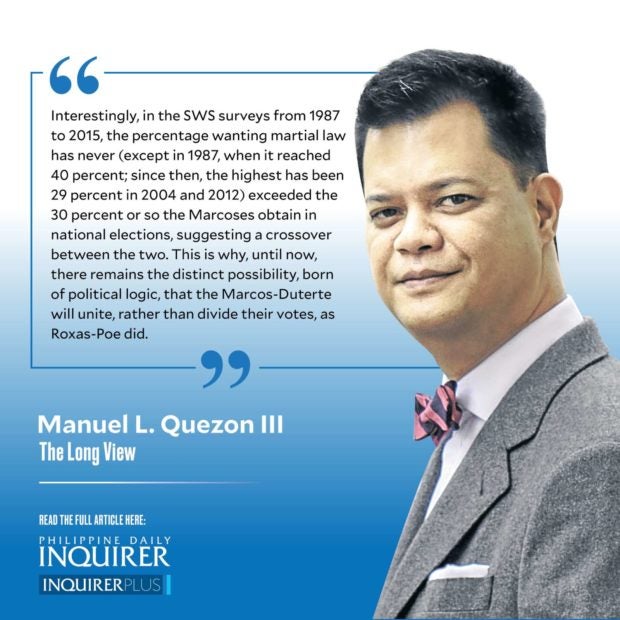 What began as an exercise in finding an idiomatic expression for a political phenomenon has ended here, which is a theory of sorts. When a colleague referred to the last-ditch October attempt to recruit Inday Sara Duterte for the presidency as a “Hail Mary pass,” the use of an American football expression made me take things one step further, and substitute a term already being widely used: “Daughterte,” for the “Deus” in “Deus ex Machina” (a sudden solution to a problem), to refer to the hope-against-hope of the loyal supporters of the President. The absence of a credible candidate to anoint would supposedly be fixed by his daughter deciding to enter the fray — which she didn’t.

In my mind I kept taking an antiquarian approach to what was going on. In the secular, Duterte-centered religion of the present age, the long-past era of Latin prayers can serve as a useful shorthand for the process in which the political faithful first recited the “Pater Noster” (Our Father), in the hope that the Great Eagle Father would descend to the vice presidency at the right hand of his political son and heir, Christopher Go. In the end, it didn’t happen. So then they tried reciting the “Salve Regina” (Hail Mary), in the belief Inday Sara would descend and take up the mantle of the Father to seek the presidency by the October deadline.

And now, the furious recitation of the “Oratio Imperata” (Invocation Prayer in a time of grave need or calamity) as political chieftains and priests, like the albulario of old, engaged in ritual acts to storm the political heavens for a Daughterte ex Machina solution to the ruling coalition’s lack of a viable candidate by the Nov. 15 deadline.

In recent weeks, Lakas-CMD, and then PDP-Laban, seem to have lost faith in this Second Coming. But the faithful stand firm. A stampita of the faithful consists of an infographic circulating online: the “Sara All Philippines 2022 Caravan” is supposed to kick off tomorrow in Cotobato City, arriving in Manila on Nov. 13, and culminating on the 15th, “The Big Day.” It has all the characteristics of folk religion, and I find it striking that all the fervor is being matched by the fervor in another cultic camp, that of the Marcoses. Except in their case, the Marcos creed can be best described as a hybrid of data science and cargo cult.

The data science aspect speaks for itself in terms of recruiting social media accounts with followers, and innovating on YouTube and TikTok. The cargo cult aspect requires a brief explanation: It’s the fostering of belief in the imminence of a new age of blessings that will start with the arrival of a special cargo. In the case of the Marcoses, belief that thousands if not tens of thousands of pesos will be the voter’s share in the Marcos billions.

Back in 2016 I’d suggested that if modernity was the central challenge of Philippine society and institutions, then that election represented a crisis of modernity. The outcome, then, was that a winning plurality of Filipinos rejected the disruption of modernity for a backward-looking but comfortingly familiar tough love of an elected strongman. The core of this winning minority was the subsection (ranging from a fifth to even a quarter of Filipinos) that has always been pining for a dictatorship.

The problem now is that there is a more recent branding for the iron fist, and it’s marked Davao and no longer Sarrat. Interestingly, in the SWS surveys from 1987 to 2015, the percentage wanting martial law has never exceeded the 30 percent or so (except in 1987, when it reached 40 percent; since then, the highest has been 29 percent in 2004 and 2012) the Marcoses obtain in national elections, suggesting a crossover between the two. This is why, until now, there remains the distinct possibility, born of political logic, that the Marcos-Duterte houses will unite, rather than divide their votes, as Roxas-Poe did.

It’s interesting that the Marcos-Arroyo-‍Duterte coalition seized upon three deflections to disguise their true goals. The first deflection was to insist, “they are all the same.” The second was to condemn their opponents for “necropolitics” when their paramount goal was a state funeral for the late dictator (itself carrying the insinuation, because linguistically rhyming, of narcopolitics); while the third was to denounce the same critics as representing a rehash of a battle between two families when it is only one family that has the historical imperative to erase its humiliation and exile in 1986 (other allied families have their own humiliations to expunge).