On top of the questionable contracts it bagged, on top of its former corporate representative’s declaration (since recanted) that it had “swindled” the government, the little company that could appears to have evaded taxes in 2020. It’s another bitter bit of information unearthed by the Senate blue ribbon committee chaired by Sen. Richard Gordon, which since August has been looking into the undercapitalized Pharmally Pharmaceutical Corp. and its workings (as backed by powerful persons in and out of the government), in the face of President Duterte’s unrelenting efforts to stop the investigation.

As reported in the Inquirer, here are figures presented by Senate Minority Leader Franklin Drilon from records of the Bureau of Internal Revenue (BIR): Pharmally was told to pay P95,502,130 in total income tax in 2020 despite securing medical-supply contracts worth more than P8 billion in that year (actually, more than P11 billion in 2020 and 2021). It paid P96,089,093, then claimed an “overpayment” of P589,163, meaning—the nerve—the government supposedly now owed it that much.

For 2020, Pharmally reported sales of P7,485,401,046, gross profit of P393,126,866, and net income of P264, 651,476. Not bad for a firm that was put up in 2019 with a mere P625,000 in paid-up capital, and that went on to corner contracts to supply the government face masks and shields, personal protective equipment (PPE), and COVID-19 test kits, to be paid from the P42 billion in pandemic response funds transferred by the Department of Health to the Procurement Service of the Department of Budget and Management (PS-DBM).

The inquiry has since elicited testimonies of overpriced and substandard medical supplies, including those with tampered expiry dates. It has likewise shown how Filipino manufacturers of PPE have been shafted vis-à-vis foreign suppliers. (The notoriety has even emboldened one Pharmally official to seek public office.)

The Senate committee smells a “grand conspiracy.” The disturbing tax information it has gleaned boosts the clamor of physicians and other sectors that the inquiry continue, to unravel the skein of pandemic response funds. VIPs are thumbing their noses at the BIR, and shouldn’t be allowed to get away with it. (But already, said Drilon, firms connected to Pharmally had corrected their tax payments.) 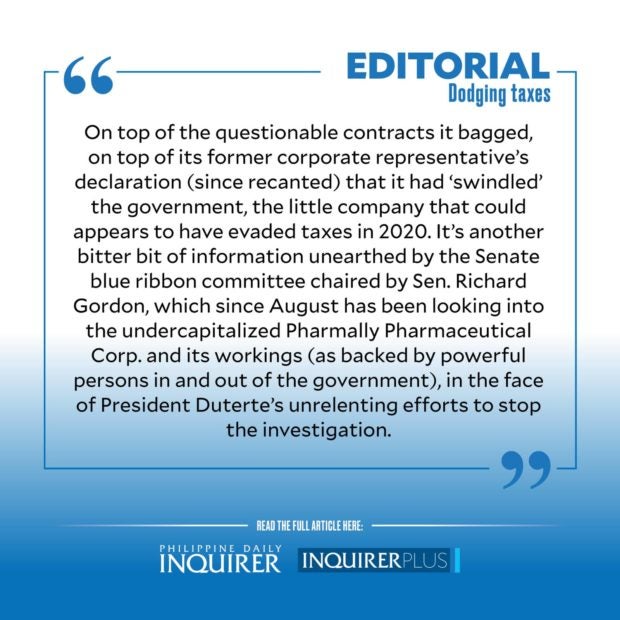 Per the tax records presented in executive session and made public on Drilon’s motion allowed by Gordon: Chinese national Michael Yang, a former economic adviser of the President and the apparent principal financier and guarantor of Pharmally—though he has now denied it—did not file income tax returns (ITRs) from 2014 to 2017; in 2018, he paid P7,600 on an amazing taxable income of P208,000; his ITRs in 2019 and 2020 are “not readable.” Even former PS-DBM head Lloyd Christopher Lao did not pay tax in 2017 and had no ITR in 2020.

Pharmally corporate secretary and treasurer Mohit Dargani paid picayune taxes (P22,062 in 2019 and P97,241 in 2020) despite having the means to own a Porsche 911 Turbo S. His sister, Pharmally president Twinkle Dargani, paid only P1,000 in 2020 although she paid P29,187 in 2018. She owns a Lamborghini Urus worth P25 million—a gift from her brother, suggesting money to burn. (The siblings have since been declared in contempt of the Senate and are in hiding.)

It took a while for the Senate committee to get hold of the tax records, with the Darganis and other Pharmally officials refusing to provide pertinent papers, or even to answer questions. BIR chief Caesar Dulay invoked secrecy laws in saying he could not publicly disclose the documents, but per National Privacy Commissioner Raymund Liboro, data privacy rights “should not be cited as an excuse to evade legal proceedings.”

As it happened, Pharmally, which reported a P599,000 working capital in 2020, was awarded much more than the limit of P5.9 million in total contracts, according to Sen. Panfilo Lacson. He cited Republic Act No. 9184 (Procurement Reform Act) stating that government contracts should be awarded to companies based on their net financial contracting capacity, as well as records showing that Pharmally was awarded a total of P8.82 billion in contracts, or, incredibly, 149,374 times more than its supposed limit.

Per Drilon’s computation, the government is potentially entitled to about P7.5 billion in taxes from the contracts the PS-DBM awarded to Pharmally in 2020. He urged the BIR to conduct a special tax audit of the company and other government suppliers.

Not to worry, the BIR is “not sleeping on the job,” per Malacañang mouthpiece Harry Roque. “If there are deficiencies in tax payments, we will run after it — and that’s guaranteed,” he declared, but it’s doubtful that there are grounds for great expectations.