You are what you eat | Inquirer Opinion
Close
menu
search

You are what you eat 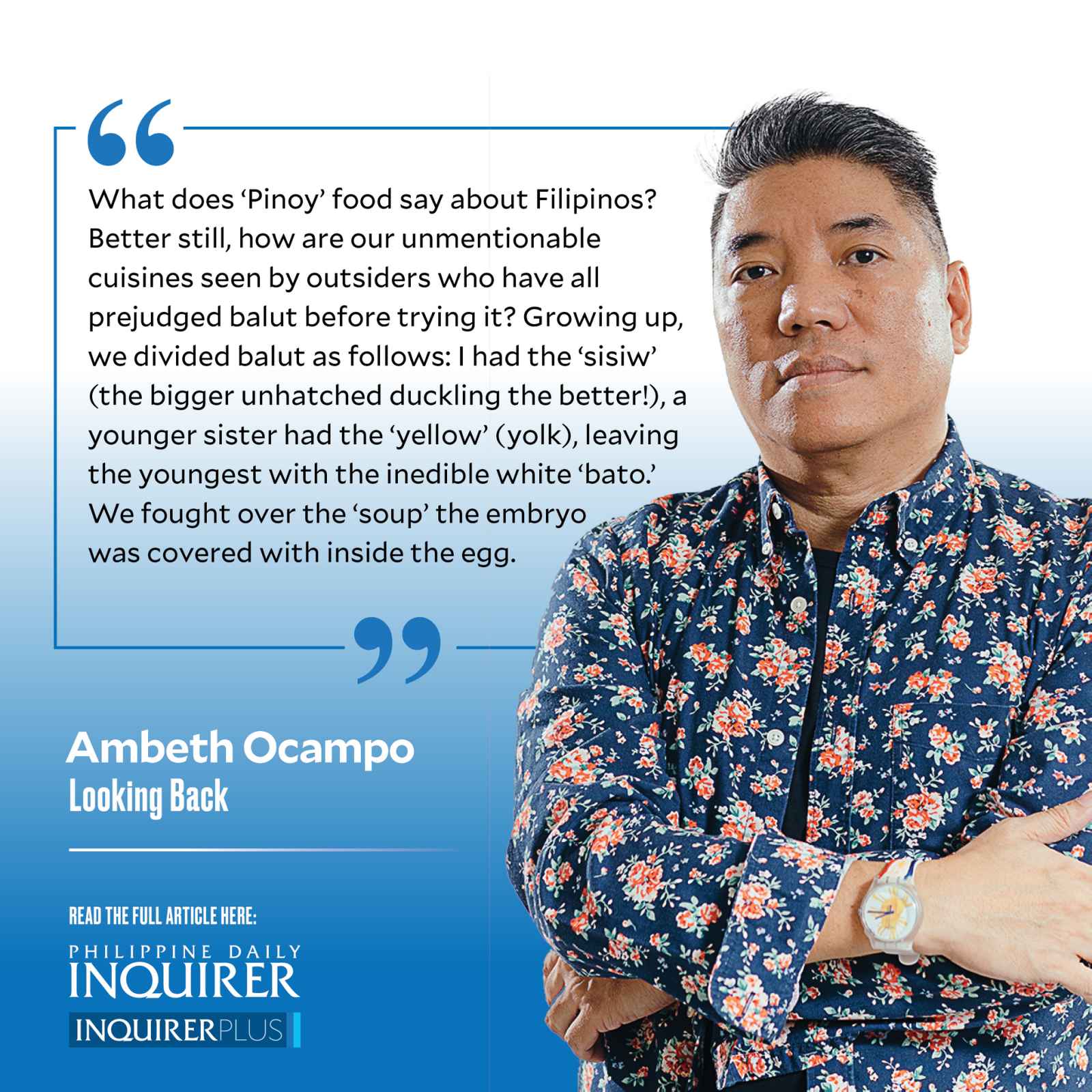 There are amusing YouTube videos of foreigners trying out “Pinoy” food. The best one shows American grade-schoolers giving adobo a passing grade but unanimously hating laing on sight. What if they were fed and given the ingredients of dinuguan? The American students sampled Pinoy vegetables, too, but without the two universally detested ones, ampalaya and okra. That I think skewed the survey.

Some videos are a public relations triumph for Jollibee, because everyone from kids and teens to random strangers in New York’s Times Square loved Chickenjoy. You could hear the crunch of the skin as they took a bite, leading a few to declare that Chickenjoy was better, or at least a notch above, KFC and Popeyes. Respondents fell for other Pinoy favorites: Yumburger, burger steak, peach mango pie, and halo-halo. Pancit palabok had mixed reviews, but surprisingly everyone took to “Filipino spaghetti” with its hot dog slices. And banana ketchup was a revelation to them.

What do Spaniards think of the newly opened Jollibee Madrid?

These videos reminded me of the saying “Tell me who your friends are and I will tell you who you are,” which might actually have been paraphrased from “Tell me what you eat and I will tell you what you are,” from Brillat-Savarin’s “The Physiology of Taste.” Unfortunately, Brillat-Savarin is better known today for the round cow’s milk cheese honored by his name instead of for his landmark treatise on taste and cuisine that has remained in print since it was first published in 1825. Brillat-Savarin pioneered the low-carb, high-protein diet, arguing that white flour, sugars, and carbs like potatoes lead to obesity. His work was not confined to food and cuisine; he took it one step further by showing that what we eat makes us what we are.

What does Pinoy food say about Filipinos? Better still, how are our unmentionable cuisines seen by outsiders who have all prejudged balut before trying it? Growing up, we divided balut as follows: I had the “sisiw” (the bigger unhatched duckling the better!), a younger sister had the “yellow” (yolk), leaving the youngest with the inedible white “bato.” We fought over the “soup” the embryo was covered with inside the egg.

I never thought of food seriously until I met Doreen Fernandez in freshman English class. She taught me not just to eat and taste food, but also to look into the historical and cultural context of whatever was served on a plate.

Doreen taught me how to enjoy a fish head. She patiently demonstrated once how to crack open the fish head and expounded on the 13 distinct flavors in a fish head. Frankly, I only taste one flavor—fish—with varying hints and textures. This lesson came in handy many years later when I was in government. During one official visit, my counterpart asked: “Do you have any dietary restrictions, Excellency?” I replied, “No, Excellency, I eat everything.” My first lesson in diplomacy was that you need not remember names because everyone else is simply “Excellency.” I was taken to a fish head restaurant and my hosts were disappointed that unlike other foreigners, I didn’t need utensils and could actually eat with my hands off a banana leaf plate. Asked if I ate fish head, I replied “of course,” and floored my host with the question: “Do you know there are 13 different flavors in a fish head?” The trap was set.

Previous guests were put off eating “kamayan” and being served a fish head instead of a fillet. (Similarly, some foreigners find our lechon disgusting because we serve it whole complete with an apple in the pig’s snout.) To my horror, the fish head was bigger than my own, but I soldiered on until my host said: “Excellency, since you are our special guest, we will give you the best part.” “Oh,” I replied, “what’s that?” He then scooped out the eye, put it on my plate, and declared, “The eye is the best part of the fish head.” Everyone at the table then turned to me and I knew this was karma for the many squeamish foreigners I had fed balut.

While everyone watched, I thought of my country, and with Lupang Hinirang playing in my head, I took the whole thing in my mouth and swallowed without chewing, pushing it all down with a swig of Coca-Cola. The host asked, “Well, Excellency, what do you think?” Being diplomatic, I said, “It is tasty, Excellency, quite good actually.” With a knowing smile, the host then got the serving spoon and said, “In that case, we are honored to offer you the other one.”

That’s how I ate my first and last pair of giant tuna eyes. That experience led to many reflections on food and identity.