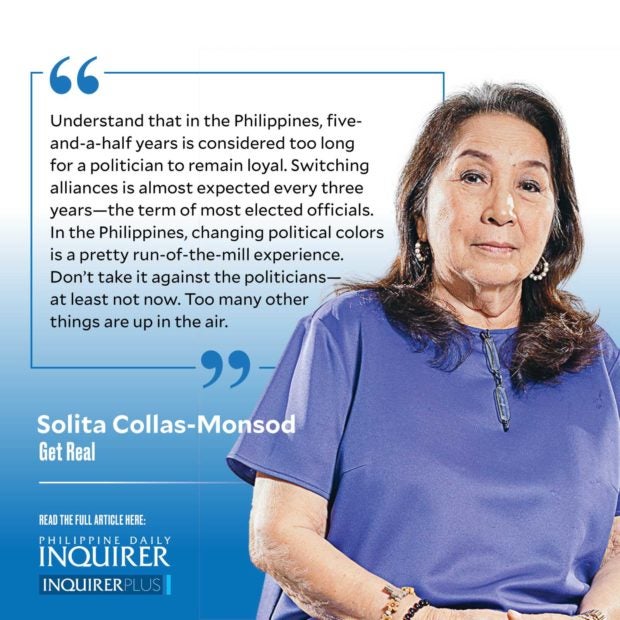 People (myself included) are expressing surprise, if not horror, at the Senate slate that Leni Robredo chose. What is this? they ask as they read the list. Leila de Lima running with Dick Gordon and Migz Zubiri, who were two of her bitterest critics and who seem to have really fallen for the Duterte-fabricated story that Leila was the mother of all druglords: What must Leila be thinking?

And you have Antonio Trillanes IV running with Jojo Binay, who Trillanes had unequivocally exposed as corrupt with a capital C. Binay had charged Trillanes with libel. What must each of them be thinking?

Not to mention the fact that some of these candidates were so busily licking the President’s ass for almost five and a half years, only to turn around and bite the hand that fed them. What’s to prevent that from happening again, especially since we know that our women presidents seem to be the most likely targets of attempted coups (remember Cory and Gloria), actions which were never aimed against male presidents? So what must Leni be thinking?

But, after fulminating for a couple of hours by telephone and text, a certain sense of calm has set in. Wasn’t the senatorial slate, and as a matter of fact, the presidential candidate herself, supposed to be the candidates of a united opposition? Yes. So why be upset? What are they united about? They are against a Marcos/Duterte clone winning.

Still, feelings die hard. So we continue to argue: Aren’t some of those opposition of pretty recent vintage? Shouldn’t they be running with their long-time allies instead of with Leni? No, we answer ourselves: Understand that in the Philippines, five-and-a-half years is considered too long for a politician to remain loyal. Switching alliances is almost expected every three years—the term of most elected officials. In the Philippines, changing political colors is a pretty run-of-the-mill experience. Don’t take it against the politicians—at least not now. Too many other things are up in the air.

Having gone through the negatives, let’s go to some of the other positives. The first is that you have to admit, Reader, that the slate has eight political parties represented, with two independents. Only the Liberal Party has two candidates. If that is not uniting the opposition, I don’t know what is.

Second, of that 11-member slate, there are at least seven names that one would unhesitatingly vote for because they have proven their worth, and like Leni, have solidly grounded principles, with no whiff of corruption. It is doubtful that we will get as many good-as-gold candidates in the other senatorial slates. Go-for-gold candidates, more likely.

Third, the slate has still to name a 12th candidate. Most likely that candidate will come from an as-yet-unrepresented sector or party. So there is still room for improvement. Perhaps from the now fragmented PDP-Laban? Or from the Left? Or another independent?

Finally, remember, politics is supposed to be addition, so perhaps that principle lords it over other principles we may have in mind.

I have made my peace with it.

I cannot let this opportunity slip to publicly and wholeheartedly congratulate Maria Ressa for winning the Nobel Peace Prize. That it took so long for President Duterte to congratulate her (half-hearted at that) is despicable, but not surprising. This year also saw Hidilyn Diaz winning an Olympic gold and Yuka Saso winning the US Ladies Golf Open. All women. The first two winning what no Filipino male had ever won before, bringing honor to the Philippines. It gives the Let Women Lead movement a beautiful start.

The LetWomenLead.org is off and running. It is hoping that the funds needed to get qualified women to lead the Philippines will be generated by crowdfunding. All who think that Filipino women deserve such leadership positions, please join.