“Doctors come out of their shells, demand an end to corruption, incompetence in COVID handling,” reads the headline of a news story in this paper. The headline was referring to a manifesto, earlier published as a full-page advertisement, in which over 300 medical practitioners called out the government’s “incompetence, insensitivity, and corruption” in dealing with the pandemic.

Doctors, nurses, and other members of the health and allied professions are traditionally seen as a silent, reliable sector. Rarely, if ever, are they heard from about matters of social concern, much less about political disputes and government policy. But the Duterte administration’s mismanagement of the COVID-19 health crisis changed all that. Over the past year, the health and medical community has learned to speak out, even take to the streets, to protest the lapses and flaws in the government’s pandemic response.

Still, to see over 300 medical personnel, including leaders of medical societies and organizations, not to mention five former health secretaries, affix their signatures to a public document criticizing the government’s response to COVID-19 is unprecedented, history-making. It illustrates the profound sense of frustration and helplessness among health frontliners tasked with taking care of sick Filipinos while grappling with a broken, undermined health system.

“The Filipino people are losing their lives, their livelihood, and their hope,” the health professionals lamented. “What more proof is needed to convince us that the respect that they deserve from their leaders has been wanting at best, and nil at worst?”

The manifesto was triggered by the strange, often bizarre response of the country’s principal policymaker, President Duterte, to the ongoing Senate and House of Representatives inquiries into the transactions between the Department of Health, the Procurement Service of the Department of Budget and Management (PS-DBM), and Pharmally Pharmaceutical Corp.

Pharmally, a foreign-owned company with a little over P600,000 in capital, astoundingly won up to P11 billion in COVID-19 supply contracts from the government through the PS-DBM. How did such a small company gain the favor of agencies tasked with ensuring that the state got the best deal possible? And did the government indeed get the best deal, or were the health and lives of Filipinos sacrificed for the benefit of a few? 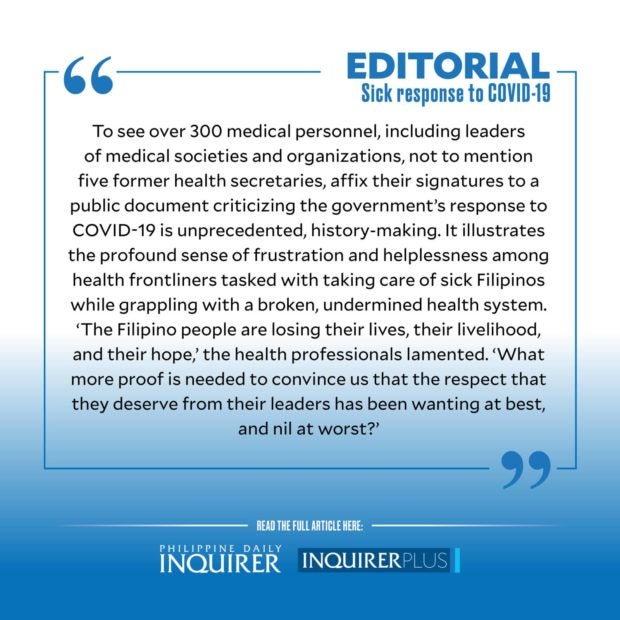 A slew of irregularities has emerged from the hearings on the Pharmally contracts. But, instead of supporting the Senate blue ribbon committee probe of these transactions, the President has, by turns, staunchly defended his “economic adviser” Michael Yang who is reported to have financed (or arranged the financing of) Pharmally’s capitalization shortfall; denounced the senators for allegedly violating the human rights of a Pharmally executive who was detained for being less than forthcoming in his responses; and ordered Cabinet members to ignore the Senate’s summons and the police and military not to assist the Senate in any attempt to get hold of potential witnesses from Pharmally.

Such behavior hardly measures up to the declarations of a leader who vowed to eradicate corruption during his term. And isn’t it remarkable that the President should suddenly wrap himself in the flag of human rights when defending foreign cronies, but not while thousands of drug suspects and bystanders (including children) were being summarily executed?

Other sectors, such as lawyers led by the Integrated Bar of the Philippines, the country’s top business groups, and leading universities, have likewise lent their voices to the call for the Senate to proceed with its probe into Pharmally and pursue it to its logical and just end. There is broad support among the public for the truth to be ferreted out. But among these, the unusual step taken by those in the health and medical field to denounce attempts to cover up the Pharmally stink and demand accountability for what could turn out to be the vilest of the vile—plunder amid a pandemic—resonates the most, because these outraged voices are coming from those that have been at the forefront of the battle.

Speaking in Filipino, Dr. Eugenio Jose F. Ramos, past president of the Philippine College of Physicians, one of the moving forces behind the “Expression of Indignation and Call to Action,” stressed that the statement “should come not just from doctors and the health sector, it should also come from all of us.” Why? “Because the illness of one means the lives of others! Because if the Filipino is sickly, what kind of Philippines would we be left with? If we don’t give the needed and proper attention and respect for the health and life of the Filipino, the economy will be shattered, and so will our security and the social order, the education of our children, the future of our country.”