Campaign for issues, not (just) individuals 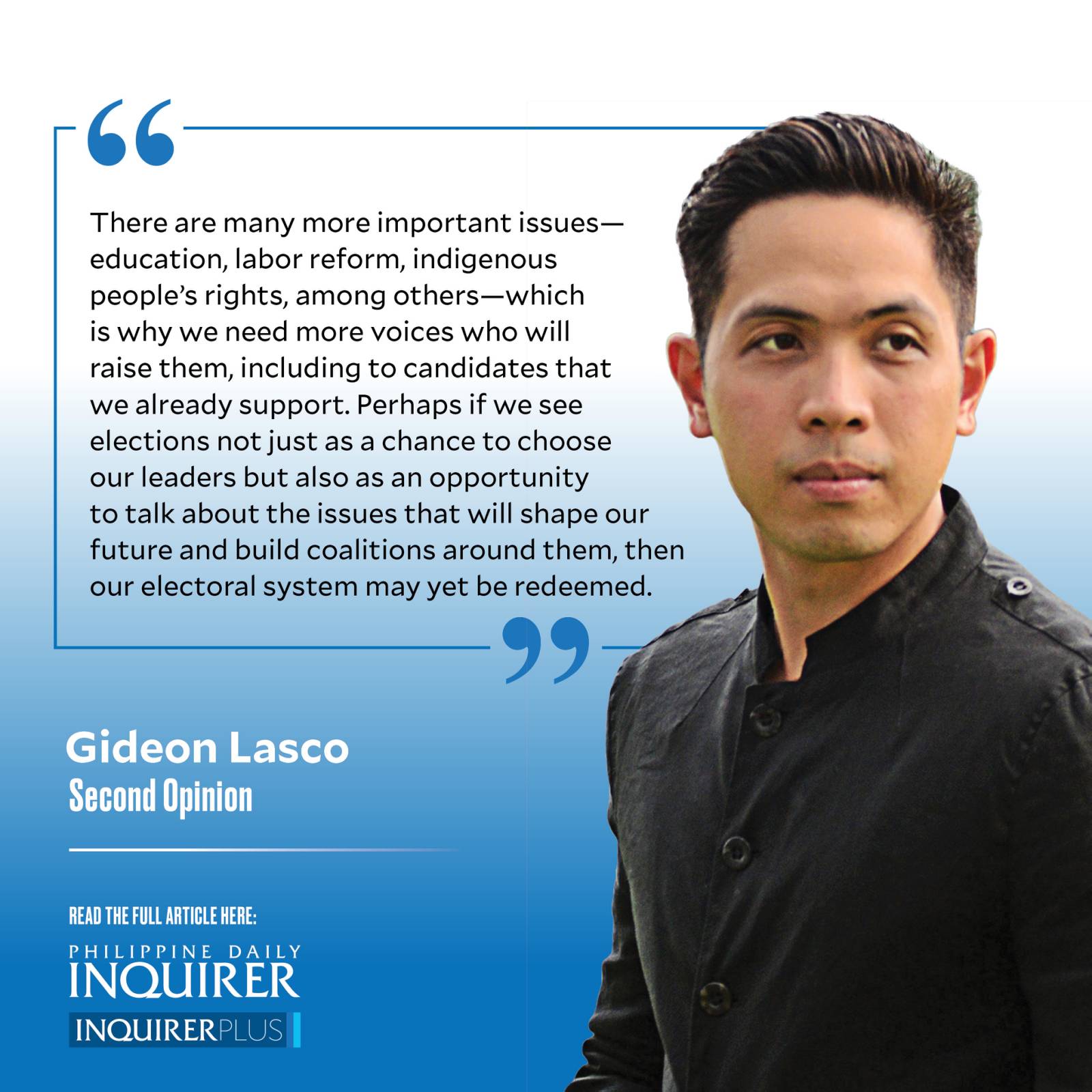 Begun, the election season has. Despite a still-raging pandemic, there has been no shortage of daily spectacle, providing (un)welcome distraction from the coronavirus. With so many people running for president, it is hard to keep track of all of them, and the fact that they might withdraw anyway and let others take their place before Nov. 15 has turned the filing of candidacies into a farce.

Farce or not, the election is quickly turning into what it has always been, as political scientists like Julio Teehankee have long documented: a personality-based contest. A quick scroll through your Facebook wall or Twitter feed will reveal that people are growing increasingly passionate about their candidates, whether through embracing their campaign color, defending them from fake news, or amplifying their credentials, invented or real, inherited or otherwise.

But is this the only role that we voters have in the elections—choosing candidates? I do not ask this to downplay the importance of integrity and character, or to dismiss the value of campaigning for one’s candidates, both offline and online. But can we not also participate in shaping the kinds of promises and platforms we want them to make, in the hopes that we can hold them to account for it? In other words, can we not campaign for issues, and not just for individuals?

These appeals are nothing new. Conrado de Quiros pined for elections that involved “debating issues and voting on them on the basis of differences of opinions or beliefs.” But certain truths need to be told several times, and it cannot be more timely than today, when most of the candidates are still to elaborate on their platforms beyond generalities and platitudes.

Of course, some might say that it’s too early to expect a full platform; others will point to certain stances as both about personalities and principles: For instance, by positioning herself against the Dutertes and the Marcoses, Leni Robredo is making clear that justice and accountability will be high on her agenda.

Then there are those who will point to the candidates’ track records—legislative, executive, or otherwise—for clues as to where their priorities will lie. By this measure, Leody de Guzman stands out as having a clear pro-worker platform, while we can credit VP Leni for her pandemic-related recommendations and programs.

In any case, regardless of their stances now, we can still interpellate them while calling attention to issues that we feel should be highlighted.

And so, for my part, I will be using this column in the coming months to call attention to issues that fall within my research and advocacy.

First, public health: Every candidate will surely say that health is one of their top priorities, but we need to be critical of what “public health” means for them. Will it be more of the “medical authoritarianism” under President Duterte? Or will it finally embrace comprehensive health system reforms with transparency, integrity, inclusivity, and a primary health care approach at its heart?

Second, drug policy reform. Drugs have long been a populist trope in our country; we have had the specter of the “adik” long before the “pasaway.” We need a president who understands the misguidedness of a punitive approach to drugs: not just EJKs, but forced rehabilitation, arbitrary detention, harsh sentences, as well as the stigma and violence that all of these engender. Instead, while not neglecting supply reduction, we need a harm reduction approach that acknowledges the various contexts of drug use and addresses the medical, legal, and social harms that surround it. As Sen. Risa Hontiveros said back in 2016: “Harm reduction is not only a compassionate response, it is also the most effective response.”

Third, the environment. With the exception of Loren Legarda, few, if any, of our politicians regularly talk about the climate crisis. We need a president who recognizes its urgency, especially for our vulnerable country. We also need a president who understands the devastation of mining and other exploitative activities; the danger of a development paradigm that pursues construction at the expense of conservation; and the importance of green spaces both in our cities and our hinterlands.

There are many more important issues—education, labor reform, indigenous people’s rights, among others—which is why we need more voices who will raise them, including to candidates that we already support. Perhaps if we see elections not just as a chance to choose our leaders but also as an opportunity to talk about the issues that will shape our future and build coalitions around them, then our electoral system may yet be redeemed.