The tasks ahead for Leni supporters 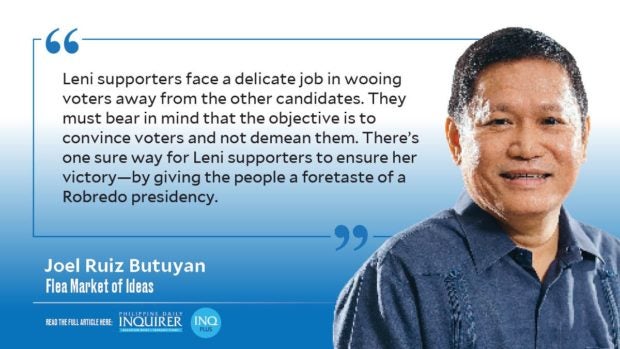 Now that the dream candidate of the opposition, Vice President Leni Robredo, has finally decided to run for the presidency, her supporters must step up for the huge and delicate tasks ahead.

In the Pulse Asia survey conducted before Leni announced her candidacy, Leni (8 percent) trails three candidates who have also formalized their candidacies. These are Bongbong Marcos (15 percent), Isko Moreno (13 percent), and Manny Pacquiao (12 percent). Sara Duterte was the frontrunner in the survey (20 percent), but she’s officially out of the race. Of course it’s possible that Sara may substitute for Sen. Bato dela Rosa, but that’s up in the air. And so many things are up in the air at this point with respect to voters’ support for the Dutertes because it appears to be nose-diving. The most damning indication is the absence of any incumbent senator running for reelection in President Duterte’s party. The Dutertes have been abandoned by fair-weather friends.

There’s also the question of where the votes will go of those who chose Sen. Grace Poe (9 percent), and those who are still undecided or who refused to answer the survey (15 percent), now that the official candidates have come forward.

Leni’s candidacy generated a stirring momentum from the moment she made the announcement. For three days from the day she delivered her “Lalaban ako” speech, there was a sea of pink on my Facebook wall. Many of those passionately coming out for Leni on social media are millennials. If this reflects a trend, it bodes very well for her because the youth are a huge chunk of the voting population.

There are also indications that the flaunted “Solid North” may not be as rock-hard in its support for the Marcoses. If our Ilocano-speaking town, Alcala in Cagayan province, is any indication, there are increasing reports of Leni supporters within each family trying to convince their family members leaning toward Bongbong to go for Leni instead.

Bongbong and Isko have positioned themselves to cannibalize the disintegrating and feeling-orphaned Duterte supporters—Bongbong by his very clear statements and Isko largely by his silence. Bongbong said that he will continue Mr. Duterte’s drug war and he will shield Mr. Duterte from prosecution by the International Criminal Court. Isko has never made any direct criticisms of Mr. Duterte’s controversial policies; in fact, he has even praised the drug war in the past. Isko also positions himself as the alternate populist leader, mimicking Mr. Duterte’s kanto style of talking.

Leni supporters face a delicate job in wooing voters away from the other candidates. They must bear in mind that the objective is to convince voters and not demean them. Calling Duterte and Marcos supporters as “bobotante,” “stupido,” and “bayaran” will shame them into a corner, making them even more bitterly opposed to the candidate of those who disgrace them.

Leni spoke against mocking the criticisms of those on the other side of the political fence when she said “Hindi lang tayo ang magaling.” Her supporters must recognize that many of those who are pro-Duterte or pro-Marcos are such because they have different realities. The truth held by Leni’s supporters must stand trial against the truth held by Marcos and Duterte supporters. Facts must be pitted against facts. This strategy of taking the moral high ground is one that Leni can never lose. It will expose the duplicitous character of masquerading opposition leaders, and will prove effective among millennials.

Leni’s supporters belonging to the middle and higher-income classes must not simply campaign for votes. Now is the time to be like Leni in serving those in the laylayan. Professionals and businesspersons who are forming groups must extend assistance to those in need. “Health care workers for Leni” must extend medical help, “businesspersons for Leni” must reach out with relief assistance, and so forth. This is the kind of campaign that will be effective for Leni, and it will counter the black propaganda that Leni is the candidate of the uncaring elite.

There’s one sure way for Leni supporters to ensure her victory—by giving the people a foretaste of a Robredo presidency.