A thousand cheers for Maria Ressa 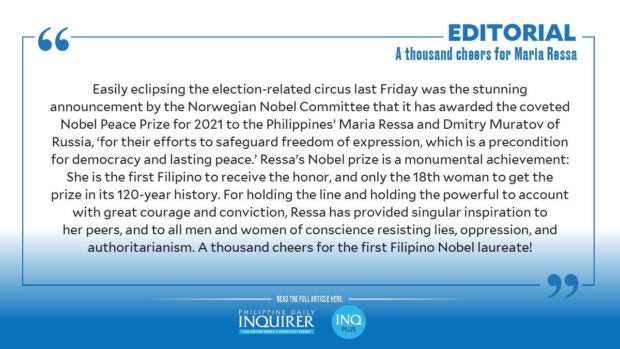 Easily eclipsing the election-related circus last Friday was the stunning announcement by the Norwegian Nobel Committee that it has awarded the coveted Nobel Peace Prize for 2021 to the Philippines’ Maria Ressa and Dmitry Muratov of Russia, “for their efforts to safeguard freedom of expression, which is a precondition for democracy and lasting peace.’’

“Ms Ressa and Mr Muratov are receiving the Peace Prize for their courageous fight for freedom of expression in the Philippines and Russia,” said the committee. “At the same time, they are representatives of all journalists who stand up for this ideal in a world in which democracy and freedom of the press face increasingly adverse conditions.”

The Nobel Peace Prize is the latest in a string of prestigious global honors conferred on Ressa, veteran journalist and CEO and founder of online news site Rappler, following the Duterte administration’s relentless attacks on her and her company over its critical coverage of the war on drugs and on the use of social media for disinformation. The Nobel committee cited how Ressa “uses freedom of expression to expose abuse of power, use of violence, and growing authoritarianism in her native country, the Philippines.’’

Ressa shared the prize with Muratov, editor in chief and cofounder of the independent newspaper Novaja Gazeta, which is described as the “most independent newspaper in Russia today, with a fundamentally critical attitude towards power.” Since its founding, six of the paper’s journalists have been killed, including Anna Politkovskaja who wrote exposes on the war in Chechnya.

It surprised many Nobel watchers that the peace prize, sought after by world leaders and peacemakers, went to journalists, although this would be the third time journalists were honored with the award.

“Free, independent and fact-based journalism serves to protect against abuse of power, lies and war propaganda,’’ the committee explained, stressing that freedom of expression and of information help to ensure an informed public. “These rights are crucial prerequisites for democracy and protect against war and conflict. Without freedom of expression and freedom of the press, it will be difficult to successfully promote fraternity between nations, disarmament and a better world order to succeed in our time.’’

The Nobel peace prize thus shone a piercing light on the critical role that independent journalism plays in the world order, in protecting freedoms, nurturing democracy, and fostering peace. It is a powerful and timely message calling for the protection of journalists, an increasingly endangered species in the age of populist and authoritarian leaders and modern technology that enables the viral spread of disinformation and propaganda.

Along with ABS-CBN and this paper, Rappler was the target of presidential threats and attacks from the onset of the current administration. Ressa was convicted for a cyber-libel case last year filed by a businessman, and faces up to six years in prison if her appeal fails. In less than two years, 10 arrest warrants were issued against her and her Rappler colleagues, and she has paid more bail money than Imelda Marcos, who was convicted by the Sandiganbayan of seven counts of graft in November 2018 but has remained scot-free.

In “A Thousand Cuts,” the Ramona Diaz documentary that tracks Ressa’s ordeal in the courts side by side with the 2019 senatorial elections in the Philippines, Ressa warned of how the sustained and methodical attacks on media were eroding the foundations of the country’s democratic project: “What we’re seeing is a death by a thousand cuts of our democracy. When you have enough of these cuts, you are so weakened that you will die.”

Her Nobel prize, which puts the protection of press freedom and journalists front and center in the global stage, is a monumental achievement: She is the first Filipino to receive the honor, and only the 18th woman to get the prize in its 120-year history.

While the Kremlin has managed to cough up a statement of congratulations for its old nemesis Muratov, there has only been deafening silence so far from Malacañang. Instead, administration hacks and partisans have swarmed the Nobel Committee’s webpage to disparage the award and once again vilify Ressa.

For holding the line and holding the powerful to account with great courage and conviction, Ressa has provided singular inspiration to her peers, and to all men and women of conscience resisting lies, oppression, and authoritarianism. The local courts must allow her to travel to Oslo in December to receive her Nobel prize.

A thousand cheers for the first Filipino Nobel laureate!

Read Next
The tasks ahead for Leni supporters
EDITORS' PICK
Legarda emphasizes role of ICC/IPs in nation building this IP month
Court of Appeals junks Mandaluyong’s ‘riding-in-tandem’ ordinance
Cusi: PDP-Laban convincing Duterte to run for senator in 2022 polls
Work-From-Home is here to stay and requires reliable logistics
Jordan Clarkson hits 8,000 career points, faces Jalen Green next
Climate Change Commission and Nestlé PH to discover sustainability-focused solutions
MOST READ
Don’t do that: Robredo to supporters calling to boycott restos supportive of Marcos
Marcos Jr’s ‘special diploma’ from Oxford: You can have it, too
Bongbong Marcos camp eyeing Pacquiao, VisMin bets as VP options — Imee
OVP spox to Imee Marcos: Robredo is an extraordinary lawyer
Don't miss out on the latest news and information.