Last August, Benguet farmers alerted the Department of Agriculture (DA) about imported vegetables being sold at the Divisoria public market. They were told that the Bureau of Plant Industry had not issued any import permits for such crops. Last week, the highland farmers again called the attention of the DA, this time with more details about their complaint that smuggled carrots are indeed flooding local public markets.

According to Augusta Balanoy of the Highland Vegetable Multipurpose Cooperative in La Trinidad, a big volume of foreign carrots was seen in key markets across the country and their investigation showed that small warehouses near Divisoria had been releasing imported vegetables whenever Benguet prices rose. Traders in Cebu also advised the Benguet vegetable industry that four container vans filled with carrots from China were being distributed in their markets every week. According to Balanoy, they have secured samples of the imported carrots that were shipped in boxes with markings that indicated these came from China.

Aside from chronic government neglect, smuggling has made life more difficult for local farmers. According to Lorna Menzi, who facilitates the shipment of produce at the La Trinidad Vegetable Trading Post, orders have dropped drastically due to the proliferation of imported carrots in Metro Manila, Cebu, and Cagayan de Oro City. From 100 sacks of carrots a day, traders were selling no more than 30 sacks recently, she said. “Dealers of imported carrots can drop their prices at half the selling price of local produce. How can we compete with that?” lamented Menzi. The wholesale price for Benguet carrots is currently P50 a kilo, while imported carrots sell at P25. 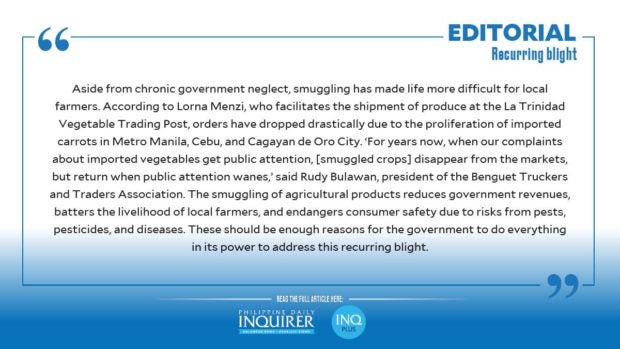 News about the proliferation of smuggled carrots sparked calls for investigation in Congress. Agriculture Secretary William Dar advised the public not to buy carrots in public markets in the meantime, warning that these may contain pesticide residue. But why pass the burden to consumers? And, as if this is something new, the DA’s other response to a problem that has been inflicting daily losses on local vegetable producers is classic bureaucracy: An inter-agency task force would be formed to investigate the smuggling. The DA announced it was already cooperating with the Bureau of Customs (BOC) to apprehend the smugglers; the BOC, meanwhile, said it suspects that the vegetable shipments slip through the backdoor or via so-called “open sea smuggling.”

Is the government really helpless in addressing this persistent problem? Surely, the products illegally brought in in enormous quantities cannot be easily concealed. These agricultural goods are smuggled by container load, many of which enter through the ports and pass through customs. Only last May, the government confiscated more than P100 million worth of smuggled frozen meat and agri-fishery products—including pork infected with African swine fever—inside 12 refrigerated container vans parked in an empty lot in Navotas City. In December 2020, the BOC seized P9.3 million worth of smuggled vegetables such as carrots and broccoli in Subic, Zambales. In November last year, the BOC apprehended P215 million worth of goods, including vegetables, also in Subic.

Before the pandemic, the losses to the smuggling of agricultural products, according to the Samahang Industriya ng Agrikultura (Sinag), amounted to P32 billion a year. Pandemic disruptions in mobility and delivery would have only exacerbated the losses and hardships experienced by farmers and agricultural producers.

Farmer leader and former agrarian reform secretary Rafael Mariano is correct in saying that the DA and the BOC must be held accountable for the smuggling of vegetables, because it is within their mandate to prevent this rampant illegality. He has urged the House committee on agriculture and food to exercise its oversight on and strengthen the implementation of RA 10845, or the Anti-Agricultural Smuggling Act. Farmer groups such as Sinag and the Federation of Free Farmers have likewise lobbied for the construction of border inspection facilities at the country’s major ports. This project, approved in 2020, has already gotten funds from the Office of the President, but according to Dar, construction has been hampered by bureaucratic and technical issues.

“For years now, when our complaints about imported vegetables get public attention, [smuggled crops] disappear from the markets, but return when public attention wanes,” said Rudy Bulawan, president of the Benguet Truckers and Traders Association. The smuggling of agricultural products reduces government revenues, batters the livelihood of local farmers, and endangers consumer safety due to risks from pests, pesticides, and diseases. These should be enough reasons for the government to do everything in its power to address this recurring blight.