Pharmally and the court of public opinion 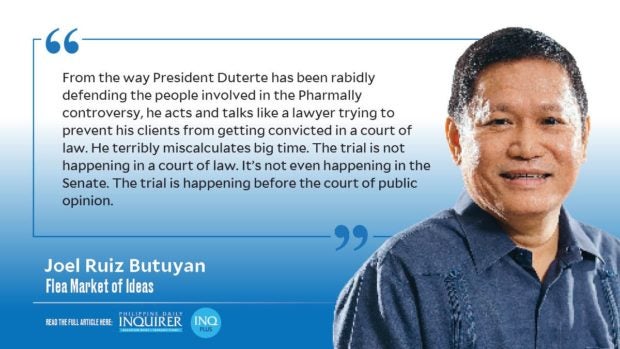 Every action or statement that the President makes to prevent or discredit the Senate investigation is not resulting in a successful defense of those being investigated. Instead, Mr. Duterte is obtaining multiple judgments of conviction for his “clients.” Every time he utters a word in their defense, he generates a guilty verdict from the court of public opinion. What’s worse is that, by showing excessive interest in defending Pharmally personalities, the President inserts himself into the ranks of the accused.

Mr. Duterte is now viewed with critical suspicion by the public. This is because, while some of those being investigated have admitted instances of anomalies, the President has hastily prejudged the deal as immaculately clean. The President has proclaimed the innocence of all the people under investigation, even if the same people have conceded particular irregularities.

Pharmally official Krizle Mago admitted that her company “swindled” the government by changing the expiration dates on the face shields it delivered. Pharmally president Huang Tzu Yen admitted the following: His company only had P625,000 in capital when it started winning huge pandemic supply contracts, it had no financial capacity when it was granted P8.5 billion worth of medical supply contracts, and it was Michael Yang, Mr. Duterte’s very close friend, who financed Pharmally’s big contracts.

There were other irregularities that had the whole country closely watching the Senate investigation. The Department of Budget and Management’s Procurement Service had given preferential treatment to Pharmally with its China-made pandemic supplies instead of patronizing local producers who offered lower prices. Customs personnel were ordered to sign inspection documents even before the items were delivered or inspected. A few months after winning huge pandemic supply contracts, Pharmally officials bought expensive luxury cars like Porsches and Lambhorginis that are worth between P6 million and P13.5 million each.

With all these damning revelations, a country’s upright leader should allow the investigation to reach its full conclusion so that all facts and documents from both sides can come out to reveal the whole truth. But what does Mr. Duterte do instead?

He declared that he will not allow executive officials to attend the Senate investigation. He directed the military and police not to follow Senate orders of arrest. He has even brazenly directed the Senate sergeant-at-arms not to enforce the Senate arrest orders, otherwise the poor officer will be arrested himself. The President’s allies in the House of Representatives have taken “protective custody” of Mago, after the latter supposedly went missing, to skirt further testimony in the Senate.

The Senate investigation has become a blockbuster teleserye that has the whole country glued to their television sets. But, just as when the villains are about to get caught, Mr. Duterte has figuratively ordered the television station to stop airing the program.

By attempting to stop the investigation, the President has unwittingly caused a rerun of a scandal-ridden teleserye from the past—when President Joseph “Erap” Estrada’s allies in the Senate blocked the opening of the infamous “second envelope” in his impeachment trial. Everyone suspected that the unopened envelope contained evidence that would prove Erap’s ill-gotten wealth. Erap was ousted from the presidency as a result.

Will Mr. Duterte suffer the fate of Estrada? Even if he will not, all the exposed anomalies rendered without closure will smell like dead rats in the ceiling. The very foul smell will stink all the way to the 2022 elections, when the court of public opinion will render its final judgment on Mr. Duterte.

Read Next
Worrisome 2022 elections (2)
EDITORS' PICK
Gear up and get ready to play with Yamaha Mio Gear
PH to import 60,000 tons of fish to cover shortage
Workers are exempted from ‘no vax, no ride’ policy – DOLE chief
#VotePH2022: COVID, power woes loom as poll concerns
Over 3 Million worth of prizes to be won at Smart Padala’s SENDali Manalo Promo!
Acer starts the year off strong with the Aspire Vero National Geographic Edition
MOST READ
Guevarra to Acosta: Obey rules on unvaccinated
Emma Stone calls Andrew Garfield a ‘jerk’ after he ‘lied’ about his ‘Spider-Man: No Way Home’ appearance
Cold-case investigation names surprise suspect in Anne Frank’s betrayal
Czech anti-vax singer dies after deliberate infection
Don't miss out on the latest news and information.