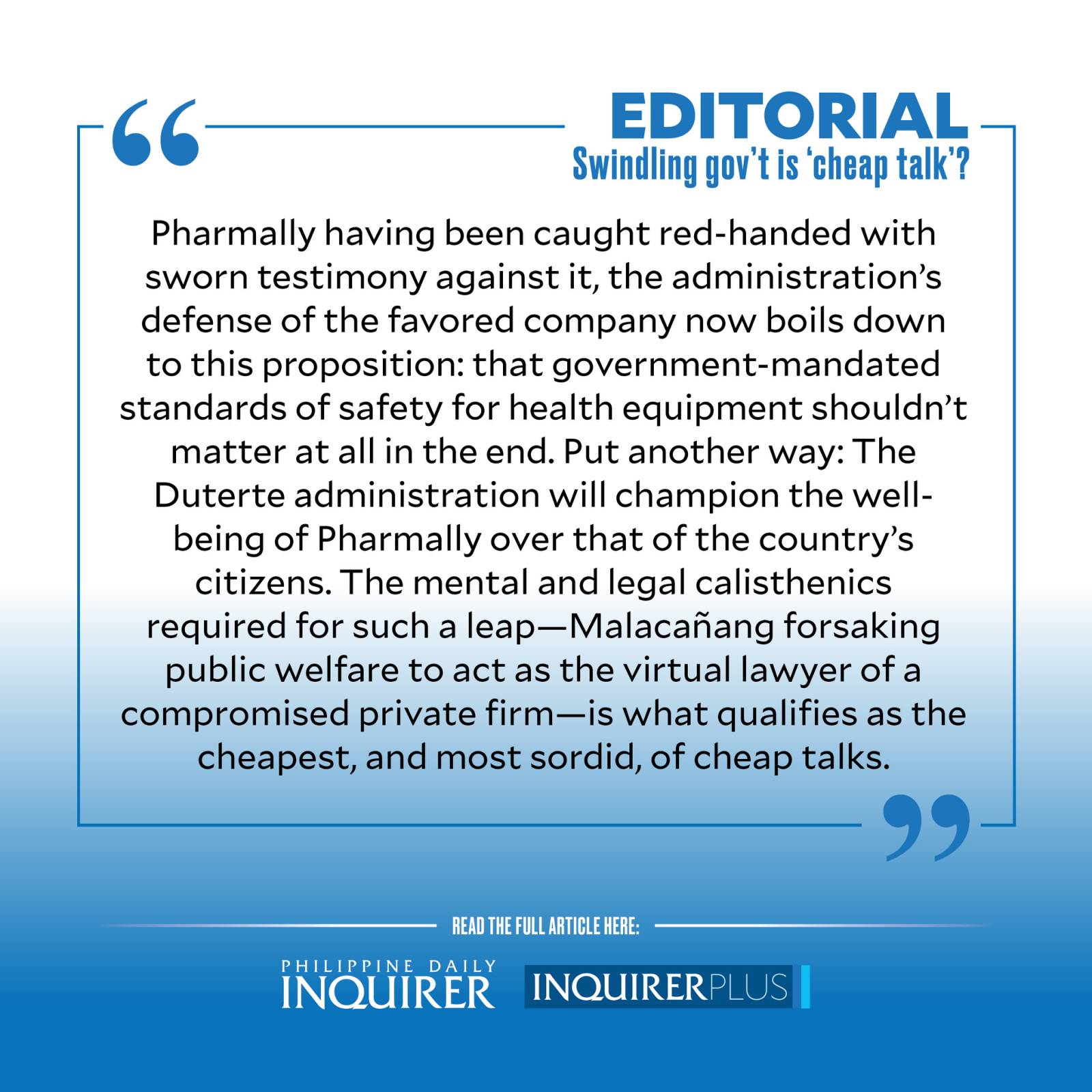 Could it be Stockholm Syndrome?

The way the administration has been most protective toward Pharmally and its officials to try to shield them from withering public scrutiny readily calls to mind that emotional response when victims develop positive feelings toward their abusers.

As has emerged in the ongoing Senate investigation, the company may have committed serious irregularities involving billions of public funds in its transactions with the government. But Pharmally appears to command extraordinary heft, because its defenders are led by no less than President Duterte. In his late-night address on Monday, the President suddenly rediscovered the notion of human rights and due process when he yet again took up the cudgels for the company. He described as “worse than martial law” the Senate’s detention of Pharmally executive Linconn Ong, who was cited for contempt for his refusal to cooperate fully with the Senate probe.

The President stressed that “(t)he Constitution really provides that no person should be deprived of life, liberty, or property without due process of law,” which is a complete turnaround from his repeated declarations over the last years of his contempt for such principles: “I don’t care about human rights, believe me” (August 2016), “I say to the human rights [defenders], I don’t give a shit with you” (December 2020), “Ignore human rights” (March 2021). He had also previously given orders for police to “shoot dead” drug suspects and, in the first months of the quarantine last year, anyone “who creates trouble.”

Mr. Duterte’s hectic defense of Pharmally comes at a time when the company is in an even bigger hole with the sworn testimony of Pharmally officer Krizle Grace Mago that she ordered warehouse employees to tamper with the production date of face shields ordered by the health department. Mago said she was merely following instructions from Pharmally management, specifically corporate secretary and treasurer Mohit Dargani.

Asked by Sen. Richard Gordon if Pharmally had in effect “swindled” the government with its deceitful act of changing the expiry dates in face shields to conform with government specifications, Mago answered in the affirmative.

That staggering revelation should have roused the administration to a fury at having been subjected to cheating and mendacity by a supplier, and one that involved a most critical item during the pandemic: medical-grade face shields for health frontliners, whose very lives would be put at risk if they were supplied substandard protective equipment.

The response of the Palace, however, was to belittle Mago’s admission. “Talk is cheap,” said presidential spokesperson Harry Roque. “Physical evidence should be presented before the court… (because testimony) can be bought (or given because of) fear. Let’s look for substantiated evidence, not just the testimony of one person.”

Mago’s testimony was in fact corroborated by two witnesses with firsthand knowledge of the incident. In a video shown by Sen. Risa Hontiveros, a Pharmally warehouse worker was heard naming Mago as having ordered them to repack the “deformed, dirty and wet face shields” and to change their production date from 2020 to 2021.

Roque’s cavalier reaction finds its equal in the breathtakingly mindless remarks by Diwa party list Rep. Michael Aglipay during the House hearing on the same issue. Trying to downplay the gravity of Mago’s testimony, he asked Health officials: “May namatay ba?” According to its Facebook page, Aglipay’s party list aims “to protect workers’ rights and promote workers’ welfare.” Apparently, that does not cover health care workers, at least 103 of whom have succumbed to COVID-19 since the onset of the pandemic. The health department itself has acknowledged that the foam component in the shields could deteriorate over time and render the protective equipment ineffective. And despite Roque’s contention that the shields would have been inspected before being accepted, Jorge Mendoza, a former inspection chief from the Procurement Service of the Department of Budget and Management, had previously testified that they were instructed to sign inspection documents for the medical equipment even before deliveries were made, to facilitate payment to the Chinese firm.

Pharmally having been caught red-handed with sworn testimony against it, the administration’s defense of the favored company now boils down to this proposition: that government-mandated standards of safety for health equipment shouldn’t matter at all in the end. Put another way: The Duterte administration will champion the well-being of Pharmally over that of the country’s citizens. The mental and legal calisthenics required for such a leap—Malacañang forsaking public welfare to act as the virtual lawyer of a compromised private firm—is what qualifies as the cheapest, and most sordid, of cheap talks.