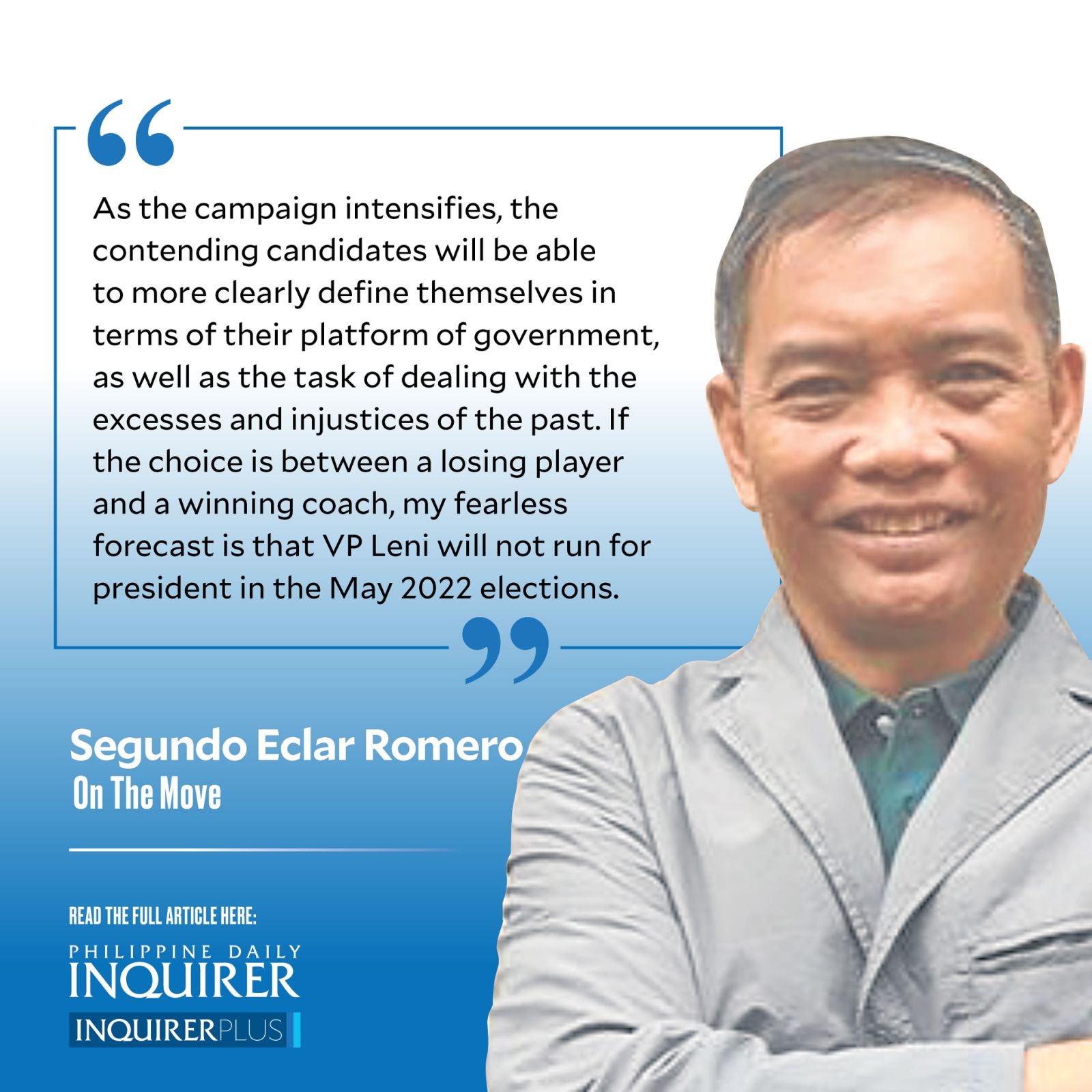 Many people expect Vice President Leni Robredo to announce her candidacy for the presidency on the anticipated strength of the results of the “internal survey” that 1Sambayan conducted on Sept. 12-25. Ping Lacson, Manny Pacquiao, and Isko Moreno, all declared presidential candidates, are in the 1Sambayan survey choices alongside VP Leni and former senator Antonio Trillanes. The results of the survey of 3 million 1Sambayan members, enrolled by 126 organizations and many foreign chapters, are in by now.

The 1Sambayan process is problematic. It has metamorphosed into a mechanism to create the optics of a groundswell of opinion for VP Leni. Even if Moreno, Lacson, Pacquiao, or Trillanes wins that internal survey, 1Sambayan will still choose VP Leni as its single opposition candidate. The internal survey is only “recommendatory” to two other vetting stages, the 1Sambayan general assembly and the convenors group. The 1Sambayan will conclude only with one result, the endorsement of VP Leni as the “single opposition candidate.”

In view of the sincerity and consistency of VP Leni’s desire to unite rather than fragment the challengers to Mr. Duterte’s anointed, it is more likely that VP Leni will now shift to the strategic role of president-maker. She will throw her support behind the Duterte challenger best approximating her vision and platform of governance for 2022-2028 and best poised for electoral success.

VP Leni will consolidate and commit her political support to boost the native support of the candidate meeting her approval. Her candidacy may be insufficient to win the presidency, but her political support could tip any of the challengers to win. Such a coalition will induce the other two candidates, now relatively much weaker, to withdraw their candidacies in favor of the single candidate backed by VP Leni. This is in line with the idea of the equity of the lead candidate Ping Lacson proposed to VP Leni the first time they talked.

This scenario, however, will work only if the players are all open to the possibility of coalescing at the right moment in the still long, seven-month, anti-Duterte electoral campaign. This is what I think is the significance of VP Leni talking to all the declared presidential contenders. Many people imagine that in these talks, VP Leni is asking each of them to withdraw in her favor. On the contrary, these talks, without any real agendas, could be processes of trust and confidence-building. They keep communication lines open in anticipation of future decisive situations.

The existence of this strategic openness among the contenders was recently demonstrated by Isko Moreno. Two days before he declared his candidacy last week, Moreno made a courtesy call on VP Leni at her New Manila office to inform her he was declaring his run for the presidency, with Willie Ong as his running mate. It was a gesture VP Leni appreciated.

In choosing not to be a player, VP Leni would be more like a coach who steers the players to victory. She will have more influence in crafting the eventual platform of government. To place their support in furtherance of their vision, she and her supporters will have time to evaluate which of the contending candidates against Mr. Duterte’s anointed are most receptive and responsive to their vision of a government dedicated to truth, justice, peace, inclusiveness, and development. As the campaign intensifies, the contending candidates will be able to more clearly define themselves in terms of their platform of government, as well as the task of dealing with the excesses and injustices of the past.

If the choice is between a losing player and a winning coach, my fearless forecast is that VP Leni will not run for president in the May 2022 elections.