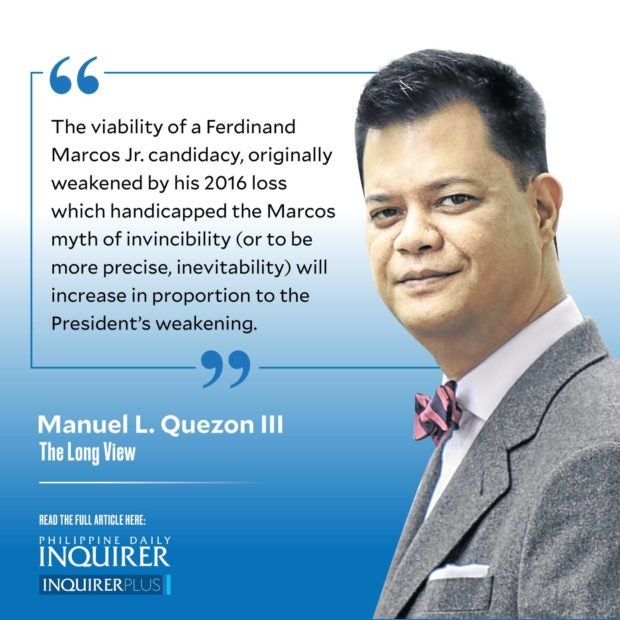 The last snapshots of public opinion date to June, as far as the President’s standing is concerned. SWS only commented as far as pointing out this was only the fourth time in the presidency that the President’s ratings fell by double digits. As I said in a recent column, the viability of a Ferdinand Marcos Jr. (BBM) candidacy, originally weakened by his 2016 loss which handicapped the Marcos myth of invincibility (or to be more precise, inevitability) will increase in proportion to the President’s weakening.

In terms of the elections of FM, these include his two legitimate ones before martial law, and the rigged elections of 1981 and 1986. The 1969 election at the very least provides an estimate of the maximum Marcos constituency, expressed in a percentage since the number of voters will always change as the population constantly increases. The maximum Marcos inflated number in 1981 (where he claimed 88.02 percent) couldn’t even be attempted in 1986; and so let us take the 1986 results as a range, from the Comelec official claim as a maximum, to the unfinished Namfrel numbers as a minimum (Comelec: 53.62 percent, Namfrel partial: 47.37 percent).

Six years after Edsa, both the old anti-Marcos, and Marcos loyalist, constituencies can be said to have fractured, with fewer fractures in the Marcos constituency: yet enough to prevent their victory had they remained united. Imelda Marcos (KBL: 10.32 percent); Eduardo Cojuangco Jr. (NPC: 18.17 percent). Winner: Fidel V. Ramos (Lakas-NUCD: 23.58 percent). Marcos-Cojuangco combined would have won (41.75 percent). What is interesting is that in percentage terms, the combined Marcos numbers adhere closely to the 1986 Marcos numbers. The “Marcos constituency” after six years, could be estimated at -6 percent to -12 percent of its 1986 level. This, then, can be said to be the peak Loyalist vote.

The results of BBM’s entry into the fray, as heir of FM, points to a durable constituency not enough to get him elected in 1995, but enough to do so, in 2010. Again what matters here is the constituency as expressed in percentages of the overall votes, as population constantly increases. The gains of BBM can be said to be enough to replace losses in attrition to the old Loyalist vote bank, while maintaining an interestingly consistent overall percentage of the popular vote.

Consider BBM’s senatorial results. In 1995, Ferdinand Marcos Jr. placed 16th: with 31.7 percent of the votes, Between Arturo Tolentino (30.0 percent) and Aquilino Pimentel Jr. (33.1 percent). His showing could be compared to other “legacy candidates” in the same election: Ramon Magsaysay Jr., third place (with 46.1 percent) and Sergio Osmeña III, seventh place (with 36.5 percent).

In the 2016 vice presidential election, Ferdinand Marcos Jr. (with 34.47 percent), got a result, percentage-wise, practically unchanged from his 2010 senatorial results, suggesting a kind of electoral ceiling. Enough for the Senate. But for the presidency? Since 1992, three presidents needed 39 percent to win: Estrada, Arroyo, Duterte (Aquino got 42 percent). An FVR scenario, where he won with 23.58 percent, is possible not least because the pandemic is expected to lower voter turnout, perhaps to a remarkable degree.

In terms of geography, the historical Marcos bailiwicks are of course Ilocos and Samar-Leyte. But in 2016 BBM demonstrated the ability to carry all of Metro Manila except Makati, plus five Mindanao provinces (his mother had carried only Agusan del Sur in 1992). Metro Manila might have then been being contrarian and, thus, oppositionist. Now, there are candidates who may siphon votes from BBM in the most vote-rich places (Luzon) and deny him inroads in the Visayas and Mindanao.