The follower makes the leader 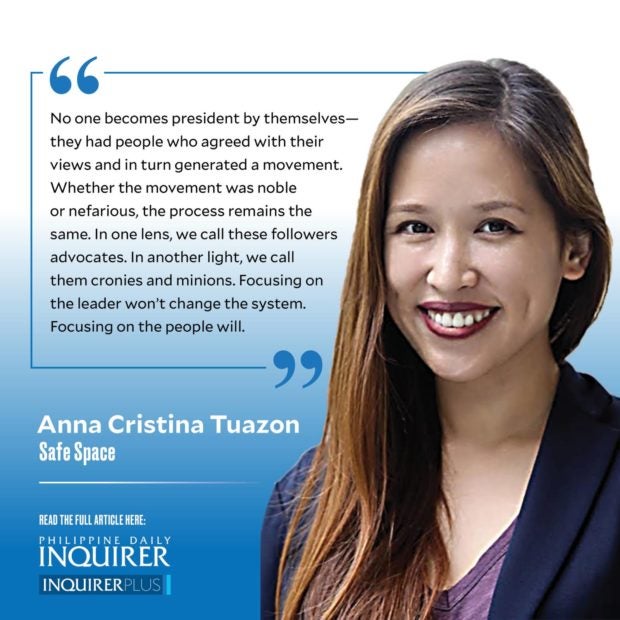 This is the article I’ve been dreading to write — and knew had to be done, since we are in a critical season for voter education. The dread comes from a wariness of having political ideas being segregated into left and right. The current climate seems to be increasingly allergic to stances that can’t be explained within 280 characters. Nevertheless, shirking from expressing political ideas is itself a stance, and perhaps the most problematic one. So here we go.

During election season, the focus is mostly on the candidates and their campaigns as people go through an important decision of who to vote for. People start aligning with certain candidates or parties and battle lines are drawn at the family dinner table. At times, there are casualties in the form of broken family ties and friendships.

I will remind you of an important truth: leaders can only lead if others will follow. Conversely, followers determine the leader. In psychology, we have noticed the tremendous influence of the first and second follower. The first follower is, perhaps, the most important. Without them, there is no leader but only a raving fool. The first follower lends the leader credibility. They make other people curious if, just maybe, this “leader” had something worthy to say. Being the first follower requires courage as they share the brunt of the ridicule. They also do the hard work of convincing others to the cause (or cult). It is not the founder of a pyramid scheme that is able to recruit legions but the first few who “share” their own success stories of wealth, thanks to the scheme. It is not the distributor of ivermectin that convinced the public to take veterinary drugs but the prominent followers—and our close friends—who insisted that they were cured (while keeping silent about the side effects reported by others). It is also the follower that builds a revolution. Once the first follower attracts a second follower, a movement becomes possible. Have you ever noticed — in class or meetings — that almost no one wants to speak up first? Or, perhaps, you were hesitating to buy a product that had zero sold? But the moment someone does it first, the rest will follow. It wasn’t Cardinal Sin or even Cory who started the Edsa revolution. It was the people. How many have tried to imitate that movement and failed? No amount of paying people to participate in such protests will lead to a genuine movement.

I have always believed in the will of the people. My more cynical friends have lamented how this “will” can be bought off nowadays. But that is not true will. Those who were paid to follow will leave once the money runs dry (hence why those who paid for votes and influence scramble to siphon off more and more money, because they fear the day their “followers” will turn on them). The trading of social media influence is a giant, underground industry — they are the modern day first followers. Do not underestimate social media personalities who campaign for — or against — certain candidates. They are more powerful than any ad.

I can’t blame my friends for being cynical. The genuine will of the people has not displayed itself clearly in some time. But it is there. People want to be safe — they just don’t agree how to go about it. People don’t want to worry if there’s food on the table — so some take the money because they can’t feed their children with long-term promises. Most feel that they’ve already sacrificed a lot and wish that someone else would sacrifice, for a change.

Leaders tell us how things should be done. Effective influencers convince people that the leader’s will is aligned with the people’s will. Once they have given their trust to the leader, with full conviction that the leader will deliver, then no amount of fact-checking will sway them. Judging the people for who they’re voting for won’t help either. They’ll just judge you right back and call you a “paid hack from the other side.” The only way to break through this process is by taking the time to listen and understand the true will behind their actions and choices. Then present a better alternative. Be the first follower of a new, better movement.

No one becomes president by themselves — they had people who agreed with their views and in turn generated a movement. Whether the movement was noble or nefarious, the process remains the same. In one lens, we call these followers advocates. In another light, we call them cronies and minions. Focusing on the leader won’t change the system. Focusing on the people will.

Gordon: ‘How dare you ask for Filipinos’ vote when you failed them?’