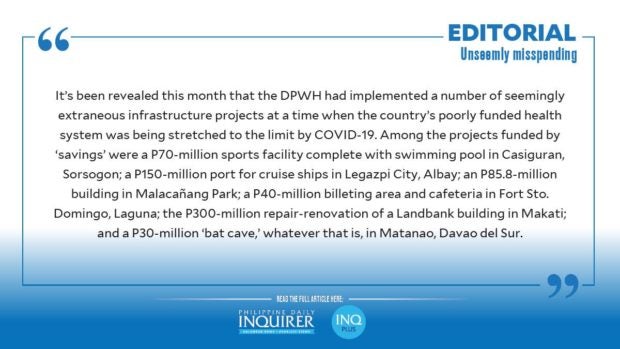 The ambitious “Build, build, build” infrastructure program has been the pillar of the Duterte administration’s economic development push. Although it’s been criticized for the slow pace of accomplishment ranged against the original targets, the fact remains that the government has so far spent P4.7 trillion on infrastructure, or more than twice the previous administration’s record of less than P2 trillion.

Reprioritizing is one thing. Unwarranted spending is a different story. It’s been revealed this month that the Department of Public Works and Highways (DPWH) had implemented a number of seemingly extraneous infrastructure projects at a time when the country’s poorly funded health system was being stretched to the limit by COVID-19.

Last year’s declaration of a national state of emergency due to the pandemic allowed the Duterte administration to convert some P10.3 billion in contingent funds into savings. Nothing wrong if those funds were spent on pandemic response efforts. However, as flagged by former Bayan Muna party list representative Neri Colmenares, the money went instead to projects irrelevant to the health crisis. “This was the time when the country is in dire need of funds for cash aid, PPE [personal protective equipment], testing and contact tracing, but here we see billions being used for projects that are not urgent,” he lamented.

Among the projects funded by the “savings” were a P70-million sports facility complete with swimming pool in Casiguran, Sorsogon; a P150-million port for cruise ships in Legazpi City, Albay; an P85.8-million building in Malacañang Park; a P40-million billeting area and cafeteria in Fort Sto. Domingo, Laguna; the P300-million repair-renovation of a Landbank building in Makati; and a P30-million “bat cave,” whatever that is, in Matanao, Davao del Sur.

Another issue that has beset the infrastructure program is slower-than-slow spending. Senators last week pointed out that with 2021 coming to a close, Malacañang was still sitting on about P100 billion worth of projects earmarked by lawmakers in the 2021 budget, including funding for medical scholarships and public works. “These projects should already be nearing completion. But until now, most of the projects—which could generate a lot of jobs—have yet to begin while some are yet to be bid out,” Sen. Nancy Binay said at a budget hearing of the Senate finance panel. Senate finance chair Juan Edgardo Angara pointed out that unless obligated by December, the funds would revert to the Bureau of the Treasury. Senate Majority Leader Juan Miguel Zubiri said it would be “such a waste if the funds aren’t released. We need these for countryside development, medical scholarships and different programs.”

The implementation of “Build, build, build” would thus continue to be critical to the country’s long-term economic recovery. The next administration to be elected in the May 2022 polls will have the opportunity to continue and finish the beneficial projects under the program, and revisit those that represent costly, unseemly misspending in the face of far more pressing concerns on other fronts. With the Duterte administration’s reflex aversion to looking into anything questionable in its backyard, and with less than eight months into its term, a thorough scrutiny of the spate of late-breaking extravagant projects under the DPWH may happen only in the next dispensation. But happen it must.