The defeat of the trolls | Inquirer Opinion
Close
menu
search

The defeat of the trolls 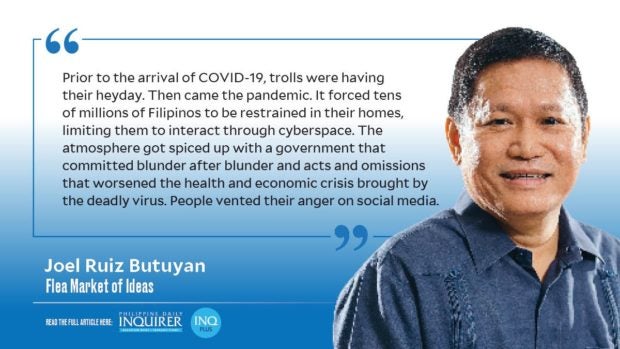 There’s been a dramatic and much welcomed turning of the tide in our country’s political cyberspace. The trolls are being trounced and they’re in a humiliating retreat.

Trolls are people who hide under fictitious names online. They spread offensive, inflammatory, and even profanity-laden commentaries. Their aim is to antagonize and disrupt public discussion with the purpose of propagandizing the narrative of patrons who pay them. They spread fake or distorted stories to mislead the public or bully targeted personalities.

Trolls in our country are overwhelmingly pro-government, judging from their attacks against opposition leaders, administration critics, and their obsessive defense of President Duterte. Because they use pseudo-names, they have no qualms bamboozling activist-citizens with ill-mannered words aimed at silencing dissent.

There’s strong suspicion that the current government employs so-called troll farms. These are organized online agitators where each employed person maintains hundreds if not thousands of pseudo-names that they use to spread false narratives in order to influence public opinion. The ongoing Senate investigation has uncovered that the Presidential Communications Operations Office (PCOO) pays 1,479 “contract of service employees.” There’s a strong feeling that these are trolls hired by the government, so the Senate is absolutely on the right track by asking the PCOO to submit their addresses, educational attainment, daily time record, and job description.

Prior to the arrival of COVID-19, trolls were having their heyday. Fact-checking groups like Vera Files and Rappler had their hands full warning the public of a stream of false stories peddled by trolls. Artists, celebrities, and activist-citizens who expressed critical opinion against the government would be swarmed with hateful attacks, and their Facebook accounts would be suspended because of concerted troll actions to report false violations of rules. It reached a point where it felt like the hallowed concept of a free market of ideas had irreversibly been compromised, because moneyed leaders with an army of trolls could drown out the truth by unleashing a torrential rain of brazen falsehoods. It also felt like the 2022 elections would be heavily influenced (if not decided) by a market of ideas overflowing with poisoned narratives.

Then came the pandemic. It forced tens of millions of Filipinos to be restrained in their homes, limiting them to interact through cyberspace. The atmosphere got spiced up with a government that committed blunder after blunder and acts and omissions that worsened the health and economic crisis brought by the deadly virus. People vented their anger on social media. In no time, the creative juices that flow in the veins of Filipinos turned expressions of anger and frustration into biting, scorching, yet also comical and amusing, expressions of dissent. An ever growing tide of real people are now creating memes, inventing maxims, and posting hilarious graphics that strip ruling leaders of respectability and instead portray them as bungling clowns and inept shysters. The crude output of trolls has been no match to the imaginative inventions of real people who have been provoked in anger. The comparison is similar to pitting a boring PTV4 program against a mega-hit teleserye of ABS-CBN in the same time slot.

There will surely be a revitalized effort to increase troll activity massively with the 2022 elections approaching. But with the momentum of an ever increasing number of real people churning out scorching criticism against an increasingly discredited government, the shifting of the tide is fast gaining irreversible strength, especially because it’s fueled by humongous scandals being unearthed by the Senate.

Millennials who wonder how it was during the months of struggle just before the dictator Ferdinand Marcos was ousted are actually living now in a similar moment. Filipinos in 1986 were angry but laughing, critical but humorous, and chanting but also singing.

There’s a whiff of the spirit of the 1986 Edsa People Power Revolution in the air with the crescendo of dissent in all social media platforms. If the youth ride the tide of dissent that’s fast gaining strength in cyberspace, they may yet have their generation’s peaceful revolution come May 2022.