Why stop the hearings? 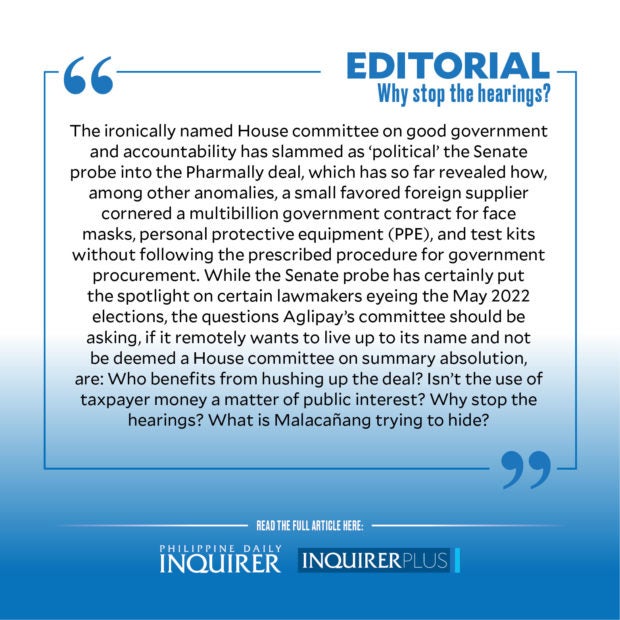 The ironically named House committee on good government and accountability has slammed as “political” the Senate probe into the Pharmally deal, which has so far revealed how, among other anomalies, a small favored foreign supplier cornered a multibillion government contract for face masks, personal protective equipment, and test kits without following the prescribed procedure for government procurement.

Echoing President Duterte’s vociferous calls for a halt in the Senate investigation, Diwa party list Rep. Michael Aglipay accused the upper chamber of engaging in “highly publicized hearings” that are “in aid of elections and not of legislation.”

The continuing Senate hearings have stretched so far to at least seven sessions of more than 50 hours. When is enough enough? Not when, like Pandora’s box, the probe continues to uncover a seemingly bottomless trove of malfeasance, intemperate greed, and an arrogant disregard for accountability in the use of taxpayer money.

How explain how Pharmally, with a capitalization of only P625,000 and no track record as a government supplier, was awarded over P8 billion worth of COVID-19 supply contracts in 2020, and more deals worth P2.3 billion in 2021?

President Duterte and Pharmally’s officials have repeatedly used as defense the Bayanihan 1 law which loosened procurement rules under the pandemic. But that law was not yet in effect on March 25, 2020 when Pharmally delivered 500,000 face masks within three hours after receiving a request for price quotation from the government. The law took effect on April 6 after publication in the Official Gazette, noted Sen. Francis Pangilinan.

The preferential treatment extended as well to the use of C-130 planes to transport the supplies from China, an accommodation not given a local supplier, according to Sen. Panfilo Lacson. Mr. Duterte acknowledged the favor as his order, saying: “Ako ang may utos noon, kasi gusto ko madalian. Ako ‘yung president.”

Previous Senate hearings also revealed conflict of interest and possible money laundering involving former presidential adviser Michael Yang, who admitted informing Pharmally about the possible deal, introducing the firm’s officials to suppliers, and was said to have loaned money to the company to pursue the deal—though he later claimed he had borrowed the money from friends he would not name.

The evidence so far indicates that Pharmally had acted as a mere middleman sourcing the products from elsewhere at tremendous markup. For face masks, Sen. Richard Gordon said Pharmally obtained its supplies from another company, Tigerphil Marketing Corp., which got them from Greentrends Trading. Greentrends sold face masks for P18 apiece to Tigerphil, which passed them on to Pharmally at P23.90 each. Finally, Pharmally charged the government P28 per piece for a P1.9-million profit in a single transaction, the senator said.

Such profiteering during the pandemic is particularly deplorable since local manufacturers had been asked to retool their operations to produce pandemic supplies last year, only for them to lose money and retrench workers because the government turned to the Chinese company instead.

The latest hearings have unearthed more irregular transactions. The most appalling is the P550 million worth of 8,000 COVID-19 test kits from Pharmally that expired because they only had a shelf life of six months, contrary to the health department’s technical specification of 24 to 36 months. The kits, which cost P69,500 each, could have done 371,794 reverse transcription-polymerase chain reaction tests at a time when the government was refusing to do mass testing, citing lack of resources. Private sector entities such as Go Negosyo and the Philippine Red Cross were also able to buy test kits at $15 each, while Pharmally’s price was $30.

How lucrative were these deals? It’s been revealed that three Pharmally officials were able to acquire four luxury vehicles less than a year after the firm bagged the P8.6-billion contract in 2020—when it had operated at a loss before that. The two Porsches are estimated to cost from P6.35 to P8.5 million each, while the Lamborghini is worth up to P25 million.

Strangely, the President has been defending this rancid deal to high heavens and lambasting the Senate probe. Last Wednesday, he was at it again, this time threatening to storm the Senate to personally “extract” officials detained for not cooperating with the inquiry.

While the Senate probe has certainly put the spotlight on certain lawmakers eyeing the May 2022 elections, the questions Aglipay’s committee should be asking, if it remotely wants to live up to its name and not be deemed a House committee on summary absolution, are: Who benefits from hushing up the deal? Isn’t the use of taxpayer money a matter of public interest? Why stop the hearings? What is Malacañang trying to hide?

Read Next
For whom do you fight, Manny?
EDITORS' PICK
Legarda emphasizes role of ICC/IPs in nation building this IP month
TNT nears PBA crown after rout of Magnolia in Game 4
Cusi: PDP-Laban convincing Duterte to run for senator in 2022 polls
Work-From-Home is here to stay and requires reliable logistics
Renewal of driver’s license now requires taking LTO education seminar
Climate Change Commission and Nestlé PH to discover sustainability-focused solutions
MOST READ
Drivers now required to take driver’s education upon license renewal – LTO
Marcos Jr’s ‘special diploma’ from Oxford: You can have it, too
OVP spox to Imee Marcos: Robredo is an extraordinary lawyer
Don’t do that: Robredo to supporters calling to boycott restos supportive of Marcos
Don't miss out on the latest news and information.