For whom do you fight, Manny? | Inquirer Opinion
Close
menu
search

For whom do you fight, Manny? 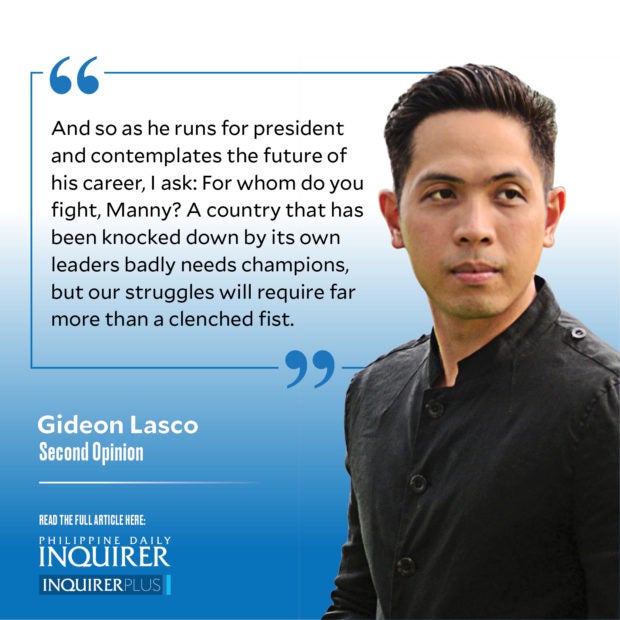 For many years, Manny Pacquiao was a global superstar, one admired by other luminaries from Kobe Bryant to David Beckham as the eight-division boxing champion with a compelling punch and even more compelling life story.

For many years, Manny Pacquiao brought pride and joy to many Filipinos, and made Sundays stand still during his unforgettable matches, giving the entire country a rare communal experience that transcended class, geography, and politics. I still remember watching his games with my grandfather in San Pablo amid neighbors’ cheers whenever he would knock his opponent down; it was as if the entire nation had become one stadium.

Alas, those moments belong to the past. Today, his storied boxing career is all but over. His recent fight barely registered (who was his opponent again?), and even the title of “Pambansang Kamao” now belongs to a new generation of athletes like Olympic medalists Nesthy Petecio, Carlo Paalam, and Eumir Marcial.

Part of it is the fact that he is way past his prime, and like even the most mythical of athletes, his career has an inevitable end. Even Michael Jordan, for all his greatness, was a disappointing and disappointed figure during his stint with the Washington Wizards, and I wonder if we will see another Wimbledon final featuring Roger Federer.

Today, however, Jordan’s legend is undiminished; surely the same can be said of Federer once he eventually retires. Pacquiao, on the other hand, has lost his standing on the global stage. He remains a popular figure in the Philippines, but acclaim is no longer unanimous—with even President Duterte hurling insults his way.

This brings me to the major reason for Pacquiao’s diminished standing: his decision to enter politics. His first bout—to represent the first district of South Cotabato in 2007—ended up in defeat, but undeterred, he contested and won the less competitive Sarangani seat in the next elections. The rest is history: a second term in Congress followed by his current stint in the Senate, which he is now trying to follow with a shot at the presidency.

Perhaps some would have been willing to overlook his numerous absences in Congress and even his tax issues. He was, after all, still the “people’s champ,” and even as congressman, his fights continued to hold the nation in thrall: the rematches with Juan Manuel Marquez in 2011 and 2012, and of course his much-hyped if underwhelming fight with Floyd Mayweather Jr. in 2015.

But as he became immersed in politics, Pacquiao has dirtied himself with it, acting like a trapo in various ways. For instance, he has joined practically all the current political parties—LP, LP (Atienza wing), Lakas-CMD, Kampi, NP, UNA, PDP-Laban, PDP-Laban (his faction)—making him a veritable political butterfly. For years, he was one of Mr. Duterte’s leading apologists in the Senate, notoriously defending his drug war even as he himself admitted to using drugs as a teen and could have been a compelling argument against Mr. Duterte’s claim that “addicts” are beyond redemption.

Oh, and he has also formed his own political dynasty: Did you know that his brother Alberto is a congressman representing the OFW Family party list, and another brother, Rogelio, succeeded him in his old congressional seat?

He has not just played politician, he has also played preacher—that of the Padre Damaso kind. Invoking the Bible, he labeled same-sex couples as “masahol pa sa hayop” in 2016, and he has also used scriptures to support the death penalty and defend Mr. Duterte’s authoritarian regime.

Of course, he has become critical of Mr. Duterte of late—his comments on the President’s treachery in the West Philippine Sea are spot on—but like his fellow senators who are changing their tune in time for next year’s elections, it has been rightfully met with skepticism.

Supporters will gesture toward his record of charitable giving; his humble roots that he himself has highlighted (“For those asking what are my qualifications, have you ever experienced hunger?”). But as many of our own politicians have shown, just because people grew up in poverty doesn’t mean they will take the side of the poor once they are in power. Pacquiao may have experienced hunger in the past, but he has yet to show ideas—let alone a track record—on how to address it beyond charity and patronage.

And so as he runs for president and contemplates the future of his career, I ask: For whom do you fight, Manny? A country that has been knocked down by its own leaders badly needs champions, but our struggles will require far more than a clenched fist.