The anniversary of the declaration of martial law is on September 23 (not September 21).’’

That’s the opening line of the Official Gazette, the official journal of the Republic of the Philippines, in its account of the 1972 declaration of martial law by the dictator Ferdinand Marcos.

Anyone wanting to have the authoritative word on the issue need only to read this official record of the events surrounding the darkest period in the country’s life, which corrects the lies perpetrated by Marcos to suit his own version of history.

Inquirer columnist and historian Manuel “Manolo’’ Quezon III, former undersecretary at the Presidential Communications Development and Strategic Planning Office — the agency that maintained the Official Gazette during the term of President Benigno Aquino III — has painstakingly pointed out that marking the martial law anniversary on this day is not only erroneous, but also helps perpetuate Marcos’ plan to fake history for his benefit.

“The moment you commemorate martial law on Sept. 21, Marcos wins,’’ Quezon wrote in his column on this day in 2018. In 2019, he added: “By altering the date, Marcos helped erase not only Sept. 21 as the last day of freedom, but also how that freedom was lost between Sept. 22 and 23. A piece of backdated paper became the instrument for national amnesia.” 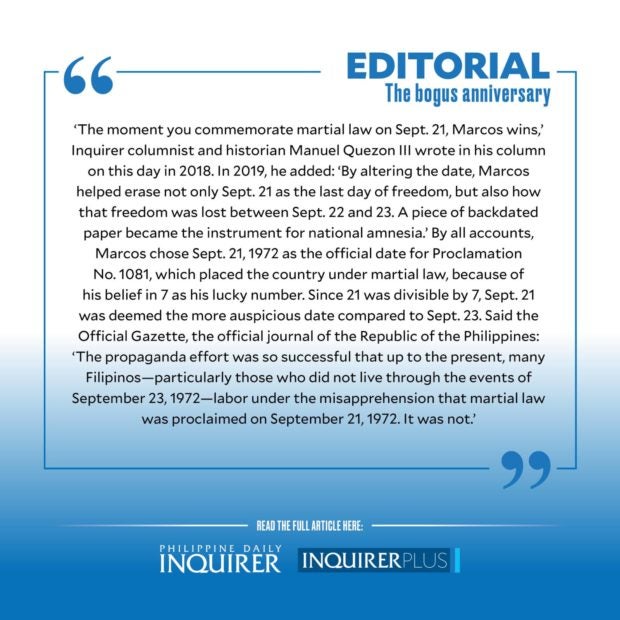 By all accounts, Marcos chose Sept. 21, 1972 as the official date for Proclamation No. 1081, which placed the country under martial law, because of his belief in 7 as his lucky number. Since 21 was divisible by 7, Sept. 21 was deemed the more auspicious date compared to Sept. 23.

But the proclamation itself was done on Sept. 23. Per the Official Gazette’s timeline of events, democracy was still functioning in the Philippines on Sept. 21. Opposition Sen. Benigno Aquino Jr. was still able to deliver a privilege speech in the Senate, the Senate and the House were still in session until Sept. 23, and a protest march of the Concerned Christians for Civil Liberties was attended by 30,000 civic, religious, labor, student, and activist groups in Plaza Miranda.

On that day, wrote Quezon, the northern bloc of congressmen went to the Palace to ask Marcos if martial law would be declared in 48 hours. The US ambassador also visited Marcos to ask the same thing.

On the evening of Sept. 22, the fake ambush on the convoy of then Defense Secretary Juan Ponce Enrile was staged to justify martial law, with Marcos writing in his diary that this “makes the martial law proclamation a necessity.’’ (Enrile confessed to the sham ambush during the Edsa People Power Revolution in 1986.)

Marcos then appeared on television on Sept. 23 at 7:15 p.m. to announce that he had placed the country under martial law as of 9 p.m. of Sept. 22, by virtue of Proclamation 1081 which he said he signed on Sept. 21. Later, he would tell different sources different dates for the actual signing of the document.

In the first hours of martial law, up to 400 opposition leaders and journalists were rounded up and arrested. People woke up that day to find that television and mass media had been shut down, flights cancelled, and incoming overseas calls banned.

Marcos built up the “cult of September 21” to memorialize the date of the foundation of his New Society, said the Official Gazette, by further proclaiming it as a national thanksgiving day. “The propaganda effort was so successful that up to the present, many Filipinos—particularly those who did not live through the events of September 23, 1972 — labor under the misapprehension that martial law was proclaimed on September 21, 1972. It was not.’’

To know what happened — or did not happen — on this day 49 years ago is to reject the revisionism that Marcos engineered right from the start, and which operates with impunity even more so today. To remember is to denounce the return to power of the dictator’s family through their minions who have propped them up—beginning with the burial of the dictator in the Libingan ng mga Bayani as political payback by the incumbent President, to other high-ranking officials using their office to support the losing vice presidential bid of a Marcos scion.

To remember is also to reject the attempts of those in power now to use the dictator’s playbook by clamping down on critical voices, trampling on the independence of democratic institutions, violating due process and human rights in the conduct of a drug war, attempting a coverup of what appears to be the shocking pillage of public funds by presidential cronies, and not least, maneuvering to hold on to power as the curtain closes down on the current regime.

We remember the bogus anniversary of Sept. 21, 1972 that was foisted on the country, and the dark days and deadly nights that began two days later, so that we as a nation will not forget how a leader bastardized his oath, plundered the country, and betrayed his people. We remember, so we can recommit to that vow: Never again.