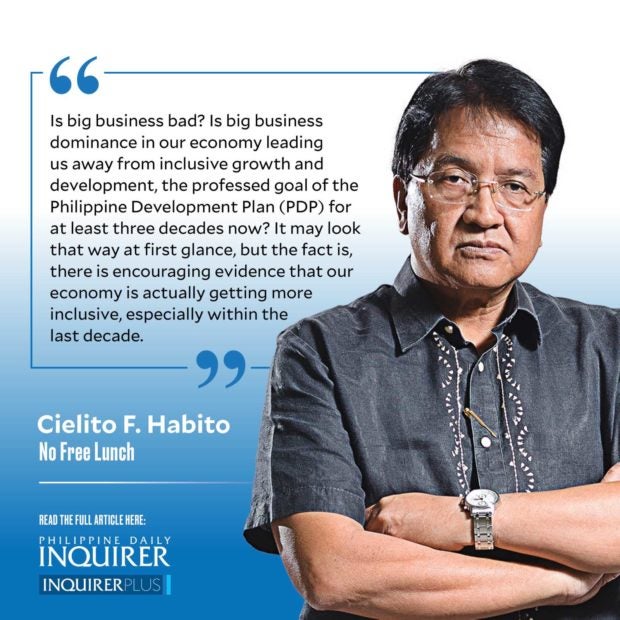 Is big business bad? Is big business dominance in our economy leading us away from inclusive growth and development, the professed goal of the Philippine Development Plan (PDP) for at least three decades now?

It may look that way at first glance, but the fact is, there is encouraging evidence that our economy is actually getting more inclusive, especially within the last decade.

A study by Dr. Rafaelita Aldaba (now trade and industry undersecretary) found that across Philippine manufacturing industries, the top four firms accounted for an average of 81 percent of total industry output back in 1998. But 10 years before, that “four-firm concentration ratio” was just 71 percent, implying that market concentration rose through that decade. More recently, the Ateneo Policy Center found that in 2012, the top 15 business conglomerates generated the equivalent of 4.7 percent of our total gross value added, aka gross domestic product. By 2018, this share had grown to almost 6 percent. Is the Philippine economy getting more exclusive, then, contrary to the PDP mantra of inclusive development?

The principle of economies of scale explains this tendency for increased concentration in a market economy. As the scale of production goes up, unit costs generally go down, giving an inherent cost advantage to larger firms, and allowing them to undercut and drive smaller competitors out of business. Technology is the major driver in economies of scale, and rapid technological advance further reinforces it, making it even harder to resist the seemingly natural trend toward even more concentration. Hence, the pushback to counter this trend so we can achieve a more inclusive economy must necessarily come from either the state and/or big business itself.

The good news is that the data show that the Philippine economy has actually become more inclusive, and income distribution has actually improved over time, notably within the last decade. The average income of the richest one-tenth of all Filipinos was 12 times that of the poorest one-tenth in the 1980s, 10.3 times in 2009, and now only 7.6 times as of 2018. The Gini coefficient, which measures income inequality on a scale where 0 denotes perfect equality and 1 is perfect inequality, steadily declined from 0.464 in 2009 to 0.427 in 2018, showing a significant reduction in inequality. Regional disparities have similarly narrowed. The average income in the richest region (Metro Manila) was 3.1 times that of the poorest region (Muslim Mindanao) in 2009, but down to 2.9 times in 2018.

These all mean that incomes of the lowest income groups have grown faster than incomes at the top, and incomes in the poorest regions have risen faster than in the traditionally favored areas of Metro Manila and Luzon. Surely, government policies must have been instrumental, like the Magna Carta for Micro, Small and Medium Enterprises of 2008 (MSMEs), the Philippine Competition Act of 2015, and the Board of Investments incentives for inclusive business models. But with large enterprises contributing an estimated 38 percent of total jobs and 64 percent of total incomes, it stands to reason that they too must have had a role in the observed improvement. Conglomerates provide millions of jobs directly, and sustain millions more indirectly within the wider business ecosystems they create through their value chains. Even as big businesses often supplant small ones—as when large retail chains drive small retailers out of business upon entering a locality—they can deliberately choose to be in a symbiotic relationship that benefits both sides. Conglomerates and big businesses need not be rivals or adversaries to MSMEs, especially when the former take their responsibility for inclusive development to heart.

We’ve all seen business giants that, by their self-serving actuations, make it easy to believe that being well-intentioned does not come with being well-endowed. But I recently had the pleasure of interviewing four top business tycoons known for their big hearts, for a forthcoming Ateneo book. I will write more about them here in due course, but I was happy to see in them that in business, being big need not mean being bad.