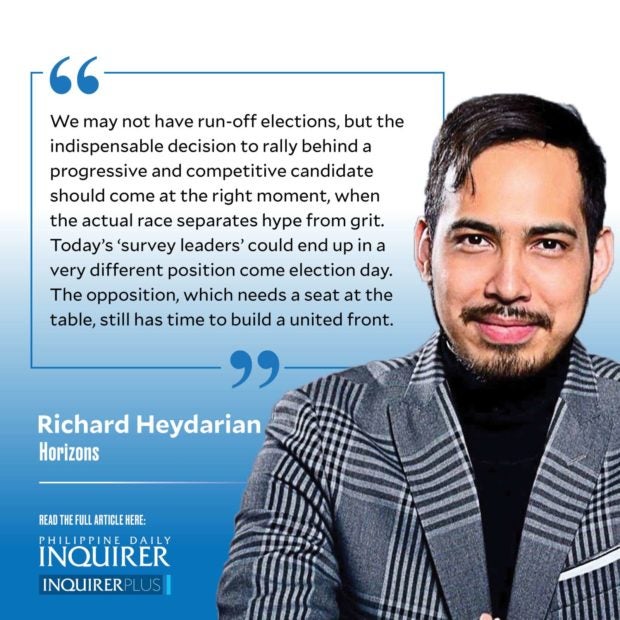 Sen. Emmanuel “Manny” Pacquiao’s decision to run for the presidency next year is at once shocking and totally unsurprising. Sure, the boxer-turned-politician’s ambitions for the highest office were always an open secret. Pacquiao himself made his intentions pretty clear when he confessed:

“I boxed to become a world champion. Any politician—even a barangay chairman—dreams of becoming president.”

It remains to be seen, on the other hand, what the next episode would be in the Duterte dynasty telenovela. But regardless of what presidential daughter Sara Duterte and her father decide to do come November, when the “substitute” candidate deadline option kicks in, the race for Malacañang looks extremely prohibitive for former administration allies such as Pacquiao.

The reality is that the boxer-turned senator has alienated the incumbent’s supporters amid his recent spats with President Duterte, while his track record of defending the President’s most controversial policies, from the drug war to the burial of a former dictator in the cemetery of national heroes, has made him a big no-no to large sections of the opposition.

The boxer-senator’s bid for the presidency has also revealed both the limits of a dream of a “united opposition” as well as deep fissures within the ruling establishment. If anything, Ferdinand “Bongbong” Marcos Jr. could end up as the candidate to beat in next year’s elections, further accentuating the need for the liberal opposition to have only one contender in the race.

A bid for the vice presidency would have been more befitting and realistic for Pacquiao. It’s crystal clear to everyone at this point, perhaps even to Pacquiao himself, that the legislature is not suited for him. Verbal tussles, rhetorical acrobatics, and legalistic debates are not his métier.

But an executive position would give him a chance to more directly serve the public and prove his patriotic credentials as well as passion for public service. As I recently discussed in our newly-launched podcast, “Project Pilipinas,” with prominent YouTuber Marc Santos Gamboa, Pacquiao has the potential calling to be the “best vice president” yet. He can leverage his status as a global celebrity to bring in major investors to the Philippines. And given his sincerity, Pacquiao will be less threatening to any sitting president, thus raising the chance of a true collaboration at the highest echelons of our state institutions. Ultimately, the Office of the Vice President would provide him a unique opportunity to finally prove his mettle as a leader and statesman.

As a presidential candidate, however, Pacquiao will be the standard-bearer of a marginalized faction of a divided party. And, not to forget, his hopes of leveraging a potential boxing victory ahead of a presidential run didn’t exactly go according to plan.

As a presidential candidate, Pacquiao’s major contribution would likely be a partial split in the “Solid South” support for the Dutertes, inevitably benefiting top candidates from the north. Sara Duterte’s withdrawal from the race altogether is also not entirely unthinkable, given the vicissitudes of Philippine politics, the widening cracks in the ruling establishment, and her instinctive interest to preserve the dynasty’s base in Mindanao.

The upshot of a disintegrating ruling coalition is the likely emergence of Marcos as the top candidate in next year’s elections, especially if he consolidates a large section of the Duterte base behind the resurgent “Solid North.”

Over the past few months, both the 1Sambayan movement as well as Vice President Leni Robredo have tirelessly sought to negotiate a united opposition tandem in the interest of the Filipino people. But it seems personal ambition, and the decades-old absence of party discipline, has predictably trumped desperately needed ideological solidarity.

But this could also mean that Robredo, who would be entering this race in a far better position than in 2016, has compelling reasons to run for the presidency herself. Why become vice president, after all, if the presidency isn’t the next logical step?

We may not have run-off elections, but the indispensable decision to rally behind a progressive and competitive candidate should come at the right moment, when the actual race separates hype from grit. Today’s “survey leaders” could end up in a very different position come election day. The opposition, which needs a seat at the table, still has time to build a united front.