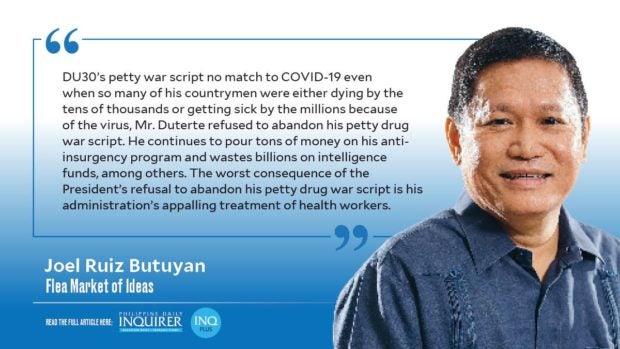 The only person who does not know, or who’s in total denial, that our country is in a real state of war against a deadly virus is none other than President Duterte. The very root cause of all the gigantic problems that have brought our country to its knees can be traced to our leader’s attitude of denial, which has made him completely out of touch with reality.

All the wrong steps, the erroneous policies, and the waste of public funds are completely due to the monumental blunder of a president turning a blind eye to what has been staring him in the face. Our country is dangerously teetering on the brink of medical, economic, and societal collapse, all because of a leader who is terribly ignoring the biggest crisis of our generation. I have earned the stripes to get enraged about this issue because my wife and I almost lost our lives to the COVID-19 virus.

The President’s detachment from reality has caused our country to suffer tremendously in our battle against the virus. We have lost a tremendous number of lives to the pandemic, and many more have fallen sick and seen their families ravaged by both illness and the economic recession. Even now, the body bags continue to pile up daily with no end in sight.

How has the President’s detachment from reality affected our war against the virus?

When Mr. Duterte assumed the presidency in 2016, he immediately strapped the whole country into a military/police straitjacket. He had formed an inflexible war plan that he intended would define his presidency. He was grim, determined, and unbending in wanting the whole country to march to the cadence of his war plan. His war plan was singularly aimed at the obliteration of drug personalities, and later was expanded to include activists and so-called communists.

The universe had other plans, however, and it wanted to make a mockery of the President’s pretensions of playing God over the lives of his countrymen. The universe unleashed the COVID-19 virus, sweeping aside Mr. Duterte’s puny war script. Compared to the war against the virus, Mr. Duterte’s petty drug war looked like the fetish of a man who never outgrew his boyhood penchant for toy guns, military arsenals, and children’s war games.

Even when so many of his countrymen were either dying by the tens of thousands or getting sick by the millions because of the virus, Mr. Duterte refused to abandon his petty drug war script. He continues to pour tons of money on his anti-insurgency program and wastes billions on intelligence funds, among others.

The worst consequence of the President’s refusal to abandon his petty drug war script is his administration’s appalling treatment of health workers. While confined in the hospital, I was awed by the courage of the health care workers (HCWs) who entered my virus-infested room multiple times a day without fuss. They constantly exposed themselves and their families to infection. In fact, so many HCWs and their families are getting infected and, worse, dying.

If HCWs were in a conventional military war, those who die or get hospitalized would be showered with medals, lump-sum bonuses, and promotions, and the victims’ families would be given lifetime pension benefits and scholarships. But what kind of treatment are HCWs getting under Mr. Duterte? The payment of their miserly extra benefits has been delayed for months. The President has dismissed demands for more benefits by curtly saying that the government has no money. And they get insulted with a promise that statues will be built in their honor.

Congress must move heaven and earth to give our HCWs parity of benefits with their military counterparts because they have been risking their lives in an even more dangerous war.

Meanwhile, it is becoming clearer that there were traitors who made tons of money out of unnecessary face shields and price-bloated personal protective equipment. These traitors must be exposed and treated as war criminals profiting from the war against the virus. But what do we have instead? A President spewing fire and brimstone to protect them. God forbid we will have another six years of hell on earth after next year’s elections.